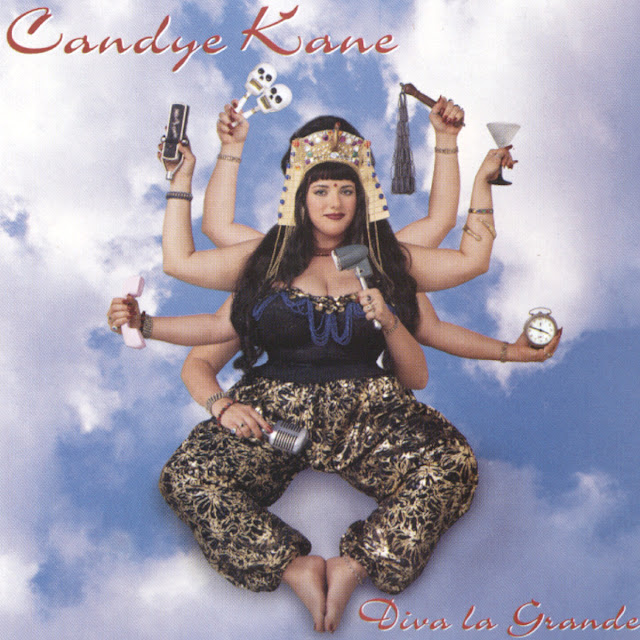 Candace Hogan, known professionally as Candye Kane, was an American blues singer and entertainer. She entered a successful music career after being a pornographic actress during porn's golden age. She was recognized as an award-winning singer, songwriter, and performer in the blues and jazz genres. She was included in the books Rolling Stone Guide to Jazz and Blues, Elwood's Blues by Dan Aykroyd, The Blueshound Guide to Blues, AllMusic, and other blues books and periodicals. Candye was accepted into the USC's music conservatory's junior opera program in 1976, but she disliked opera and dropped out. She became part of the punk rock music scene of the early 1980s. She started country punk bands and befriended and shared the stage with musicians as diverse as Black Flag, Social Distortion, James Harman, The Circle Jerks, Los Lobos, The Blasters and Lone Justice. In 1985, she caught the attention of CBS/Epic A&R Head, Larry Hanby. She was signed to a developmental deal and recorded her first demo with Grammy winner Val Garay. Kane was initially marketed as a country singer, but CBS dropped her upon learning of her controversial past.

At seventeen, Kane became pregnant with her first son. When she turned eighteen, she turned to adult modeling and stripping to make some cash, appearing in videos and over 150 magazines from 1983 to 1985. Eventually she worked as a columnist for Gent magazine as well. In 1986, she moved from Los Angeles to San Diego. She married bass player Thomas Yearsley (of rockabilly power trio The Paladins), with whom she had another son. Kane majored in women's studies at Palomar Community College. She continued to write songs and discovered the brash blues stylings of Big Maybelle, Ruth Brown, Big Mama Thornton, Etta James and Bessie Smith. In 1991, she self-released "Burlesque Swing", her first recording since "A Town South of Bakersfield". In 1992, she was signed by Clifford Antone to a record deal with Antones Records. Her first CD, "Home Cookin'", was produced by Yearsley, Cesar Rosas (of Los Lobos), and Dave Gonzales. It was released in 1992 followed by Knock Out. She then signed with Discovery Records, releasing "Diva La Grande", produced by Dave Alvin and Derek O'Brien. Next, she was signed by record mogul Seymour Stein to Sire Records during the height of the swing revival.

Candye released "Swango", which was produced by Mike Vernon for Sire/London Records; it was her only major label release. This was followed by her Rounder/Bullseye release, "The Toughest Girl Alive", produced by Scott Billington. Next she released four CDs on the German Label Ruf Records. Subsequent titles included "Whole Lotta Love", produced by Val Garay, and "White Trash Girl", produced in Austin by Ruf Records and Mark Kazanoff. In 2007, she released "Guitar'd and Feathered" on the RUF records label. The CD was produced by former Muddy Waters guitarist Bob Margolin. In 2009, she signed to Delta Groove records and released "Superhero" in June 2009. She made a 'topless' video for the song, "All You Can Eat", during which she pounded the keyboards with her bare breasts. She dropped this from her act after her first bout with cancer, which caused her to lose over one-hundred pounds and reduced her bust from 44H to 38D. A stage play about Kane's life debuted at San Diego's Diversionary Theatre in January 2009, directed by Javier Velasco. The play, called The Toughest Girl Alive, was based on Kane's memoir about her turbulent life. She was included on the 30 Essential Women of the Blues CD set released by the House of Blues record label and the Rock for Choice compilation. She appeared with Lucinda Williams and Dwight Yoakam on Town South of Bakersfield on Enigma Records.

Among the songs that Kane wrote were "The Toughest Girl Alive" (used on the Hidden Palms series for the CW network); "Who Do You Love" (nominated for an OUT music award); "200 Pounds of Fun" (featured in the motion picture, The Girl Next Door); "For Your Love" (included on an episode of The Chris Isaak Show); "Please Tell Me a Lie" (used in the motion picture Heavy, starring Deborah Harry); "You Need a Great Big Woman" (used on the Oxygen Network series Strong Medicine); and "The Lord was a Woman" (recorded by comedian Judy Tenuta). At the time of her death, Kane was signed to Los Angeles's Delta Groove records. She toured worldwide more than 250 days a year, and appeared in many prestigious festivals, including the Ascona Jazz Festival, Midem, Paléo Festival, Monterey Jazz Festival, Dubai International Jazz Festival, Waterfront Blues Festival, Byron Bay Blues Festival in Australia and Notodden Blues Festival. She played for the President of Italy at the French embassy in Rome and at the Cannes Film Festival, and her music was often featured on B. B. King's Bluesville on XM radio.

Kane's known survivors were two grown sons, one of whom, Evan Caleb, played drums in her road band. She appeared often at gay pride festivals worldwide and identified openly as a bisexual. Kane had become an activist and philanthropist in recent years. In August 2009, she appeared in Dublin, Ireland for the World Congress for Down Syndrome with her United by Music charity. In March 2008, Kane revealed on her website that she had been diagnosed with pancreatic cancer and was undergoing treatment. This was found to be a neuroendocrine tumor and was successfully resected on April 18, 2008 at UCSD Thornton Hospital. Kane died from the disease at the Cedars-Sinai Medical Center in Los Angeles on May 6, 2016, aged 54.