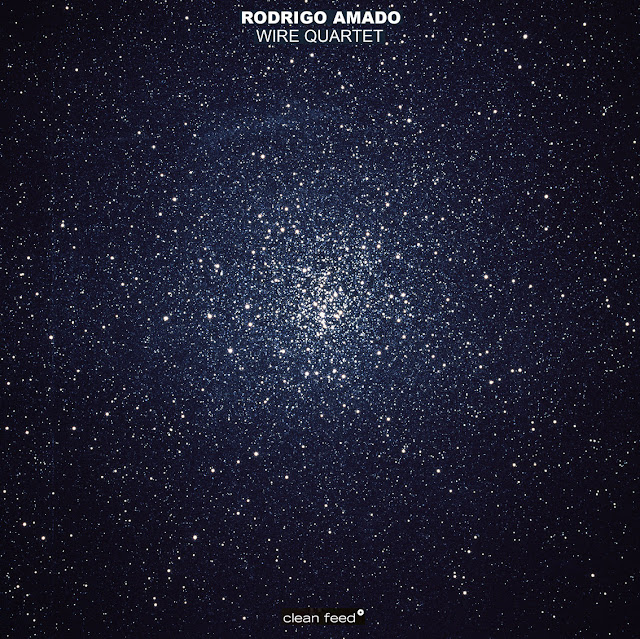 For Portuguese saxophonist Rodrigo Amado, improvisation isn’t only a process of making music, but an end in itself and a cause he pursues with great passion. His long span project Lisbon Improvisation Players and other groups he formed with, for instance, Ken Filiano, Steve Adams, Dennis Gonzalez, Carlos Zíngaro, Kent Kessler, Paal Nilssen-Love, Miguel Mira or Gabriel Ferrandini, all share the same method of opening the concept of real-time composition to as many perspectives as possible. With one foot in modern jazz and the other in free improvisation, what he likes most is to play in the jazz idiom, without any tunes or preconceived structures, but forging a work of strong structure, clear direction and deep meaning, in real-time. So, his improvisation, although not free in formal terms, is free anyhow in its strategies and in the open spectrum of possibilities it offers musicians working with him. And that ambiguity is what interests him.

In September 2001, Amado joined brothers Pedro and Carlos Costa to start the label Clean Feed, totally devoted to record creative contemporary jazz and improvised music. Very quickly, Clean Feed found itself at the vortex of the international creative jazz scene, releasing projects that reached far beyond what was initially imagined. In 2005, Amado left the company and started his own label, “European Echoes”, focusing mostly in his own work. Since then, he is spending more and more time with his own projects, with music and photography. He also writes on a regular basis for one of the most prestigious Portuguese newspapers, Jornal Público. He leads the projects Lisbon Improvisation Players and his Motion Trio with Miguel Mira and Gabriel Ferrandini, and tries to mantain regular collaborations with his other projects; the trio with Kessler and Nilssen-Love, the trio with Zíngaro and Filiano, and the quartet with Taylor Ho Bynum, John Hebert and Gerald Cleaver.

If anything, we can applaud the work done by Pedro Costa of Clean Feed to get Portuguese musicians of quality visibility and especially audibility outside of the country. One of these musicians is saxophonist Rodrigo Amado, featured here in the past few days with three excellent albums. His Wire quartet consists of Hernani Faustino and Gabriel Ferrandini, the rhythm section - if I can use that word - of the much acclaimed RED Trio, and with Manuel Mota on guitar, featured before on this blog on various guitar reviews. Amado is a fierce saxophonist, but his sound his warm and deep, which he manages to maintain even in the more savage moments. He is not Brötzmann or Gustafsson or Dunmall or Perelman or Gjerstad. His sound is warm and gentle like a summer breeze, even when the breeze gets to storm level, it is never bone-chilling, it keeps its warm round tone.

With the Wire Quartet, the band improvises freely, without prior themes or agreements, music flowing as it is, in the moment but with a great sense of direction, and with Amado leading the quartet through moments of calm intensity, of more nervous agitation, of increases speed and volume, and all nuances in between. Faustino and Ferrandini I no longer need to acclaim, as I have done that sufficiently before, these guys know their craft - technically - and their art - musically - to co-create to move as one to emphasise to color to propulse forward to go against the grain and to support. Mota's guitar is the disruptive element in the band. His harsh dry sound is the ideal counterbalance of the sax, offering a strange tension of extremes, yet they move so well in the same direction that the disruption becomes a real partnership, like rocks in a stream creating torrents. "Abandon Yourself", the first track, is almost half an hour long, and moves like a river from quiet brook over wild rapids to quieter places again, with Mota's noise forcing Amado into savage outbursts and Amado's sax pushing Mota into unexpected moments of sensitive gentleness.

"Surrender", the second piece is shorter and a real slow free improv piece introduced by Mota's guitar, and again the guitar's short bursts and sprinkles of notes are in a constant countersound to Amado's long and sustained wails, full of tradition and bluesy inflections. The album ends in beauty, with a track called "To The Music", again starting with sounds that grow organically out of silent first moves and gentle countermoves and subtle pushes forward, until the total sound emerges with solid foundations and volume, offering Amado the chance to shine, to soar, to sing his lyrical jazzy phrases full of agony and excitement propulsed forward by the rhythm sections and chased by the mad guitar of Manuel Mota, like a clash of two traditions merging into one coherent fist of music.