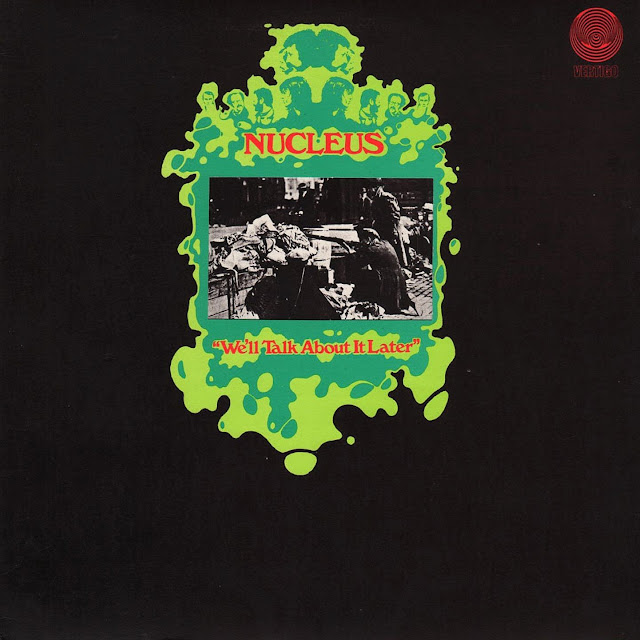 Ian Carr was at the forefront of jazz music for over 40 years. He began in his home town of Newcastle-Upon-Tyne, where he joined his brother Mike's modern jazz group, the EmCee Five which ran successfully from the late 1950s until the early 1960s. He then co-led the innovative modern British jazz group the Don Rendell/Ian Carr Quintet which released 5 albums on EMI Columbia's "Lansdowne Series" label. The Rendell-Carr Quintet is regarded by many as one of the most influential, important and original modern British jazz groups ever. After the break-up of the Rendell-Carr Quintet, which also featured pianist Michael Garrick, Ian Carr went on to form the iconoclastic jazz-rock group Nucleus, which represented the United Kingdom at the 1970 Montreux Jazz Festival and won the award for top group that year. They also played the Newport Jazz Festival in the USA on the strength of Montreux.

They released 12 albums either under the Nucleus or Ian Carr name between 1970 and 1980 and toured extensively worldwide. Carr wrote all the music for three of these albums ("Solar Plexus", "Labyrinth" and "Old Heartland" of which the first two received bursaries from the Arts Council of Great Britain) and he wrote 8 of the 9 tracks on "Out of the Long Dark". He also made significant contributions to the recordings of compositions by jazz composer Neil Ardley on the albums, "A Kaleidoscope of Rainbows" (with Nucleus), "Harmony of the Spheres" and "Zyklus" and to jazz composer and pianist Keith Tippett’s jazz orchestra Centipede on the album "Septober Energy". He was also a founder member of the United Jazz and Rock Ensemble big band which made over 10 albums between 1977 and 1999 and which continued to perform until 2002, in which year it gave a series of farewell concerts.

Nucleus' second album has been hailed by many as a masterpiece of British jazz-rock and I can only fully concur! The parameters were set with the 1970 debut "Elastic Roc" and the same crew kicks it up a notch on "We'll Talk About It Later", released 1971. Well, it's time to talk about it now. What an incredible and timeless piece of music this is. Tighter than a Republican Tax legislator, the flow of tidy compositions wreak impossible pleasure to the unaware audiophile, dense tapestries of brassy sound from the sax, oboe and trumpet, raucous guitar friction from axe God Chris Spedding and a taut rhythm section that steers the music brazenly forward. Even after 40 years, the material resonates with shimmering grace and elegance. Many ensuing bands listened fixedly and were duly inspired by the brilliant tunes laid down on this vital recording. Blastoff with a rollicking Karl Jenkins composition "Song for the Bearded Lady" which would be remodeled on the 1974 "Bundles" album as "Hazard Profile 1", a pervasive riff that seeks to hypnotize and make comfortably numb, featuring some Ian Carr trumpet magic, Spedding's sexy guitar moans and some propulsive drumming from John Marshall, perhaps the most underrated drummer in prog. Thrill seekers will get their jollies here.

For those who worship the bass guitar altar, "Sun Child" provides a Jeff Clyne platform to rumble front and center, seduced by some scintillating collective brass work, funky wah- wah guitar that defies logic and possessed drumming. Sounds a lot like Roxy Music's "The Bogus Man" but without the synthesized Eno gloss. "Lullaby for a Lonely Child" coils out like a jazz reprise of ELP's "Take a Pebble", a gently, serene and percussive heavy piece that shudders and trembles with suave enchantment, giving lieu to some more Carr lung work. The monumental title track is a protracted bluesy jam that launches Spedding's guitar into deeper experimental expanses, letting all the soloists exploit their talent and inner muse to the hilt, thus creating an audio cacophony of utter urgency, something Led Zeppelin would do on "Dazed and Confused", for example. The colossal "Oasis" reveals in the course of its near 10 minutes the band's ability to seduce with atmosphere and not just chops, a sonic sanctuary where Brian Smith's sulfuric saxes, Jenkins' opulent oboe and Carr's trumpet and flugelhorn, all coalesce into a mesmeric refuge of sound. This is assuredly the jazziest piece yet, with a more obvious Miles Davis inspiration. The Clyne Marshall duo deal out some fine work, thus cementing the loosey-goosey improv into relaxed heights of accomplishment.

"Ballad of Joe Pimp" offers vocals that rekindle thoughts of early King Crimson and to a certain extent some of Zappa's oblique fixings or even a lighter version of Black Sabbath (the riff). Just tremendously creative stuff. "Easter 1916" is a jazz-rock adaptation of Yeats poem of the Irish uprising that ultimately led to some nasty executions. Musically, the powerful political emotions are delivered by some furious sax explosions and hyper polyrhythmic drumming from John Marshall who proves his mettle without a pause of any kind (his wrists must be sore as he takes this one home!). The mood is frenetic, raging, brittle and desperate. Unreal, and truely a masterpiece and timeless monument of contemporary rock music.

As an author, Ian Carr wrote several important books on jazz including "Music Outside" (1973) which was republished as a 2nd edition in January 2008; the authorised biography of Miles Davis, "Miles Davis: A Critical Biography" (1982) which includes a third revised edition (1998). This is considered by many to be the definitive biography of Miles Davis. He also wrote "Keith Jarrett, The Man and his Music" (1992) and was co-author of "Jazz, the Essential Companion" (1987) and "The Rough Guide to Jazz" (3rd edition, 2004). As a broadcaster he made many appearances on BBC Radio 3 including introducing a six part Jazz File series on Miles Davis in 2001. He was Programme Consultant for Mike Dibb's two-part Channel 4 television documentary "The Miles Davis Story", screened in April 2001. This attracted a record television audience for jazz of 1.2 million viewers. Similarly, he was consultant on Mike Dibb's documentary "Keith Jarrett - The Art Of Improvisation", screened on Channel 4 in December 2004.

Ian Carr was also an inspiring teacher and Associate Professor of Jazz at the Guildhall School of Music and Drama. He also taught at the Weekend Arts College for groups of young jazz musicians in North London and many of today’s jazz stars, such as pianist Julian Joseph and vocalist Cleveland Watkiss (both of whom performed at a tribute concert for Carr held at the Guildhall School of Music in November 2006) were inspired by him for his boundless enthusiasm and encouragement. In May 2001, Ian Carr joined his old partner Don Rendell for a reunion concert playing to a packed foyer audience at the Royal Festival Hall, in one of several concerts celebrating 50 years of the South Bank.

The trumpeter, composer and author Ian Carr was one of the United Kingdom’s most important figures in contemporary jazz music. As a musician, his contribution to jazz was exceptional and his musical legacy remains a huge influence on generations of musicians and audiences who often have been drawn to the many layers of jazz through an initial interest in Ian Carr’s music. His performances and recording work with his first major group, the Don Rendell/Ian Carr Quintet in the 1960s made him a legendary figure. However, it was his later group Nucleus which was responsible for spearheading a huge revival in modern jazz music in the 1970s. Ian Carr passed away on Wednesday 25 February 2009, aged 75.