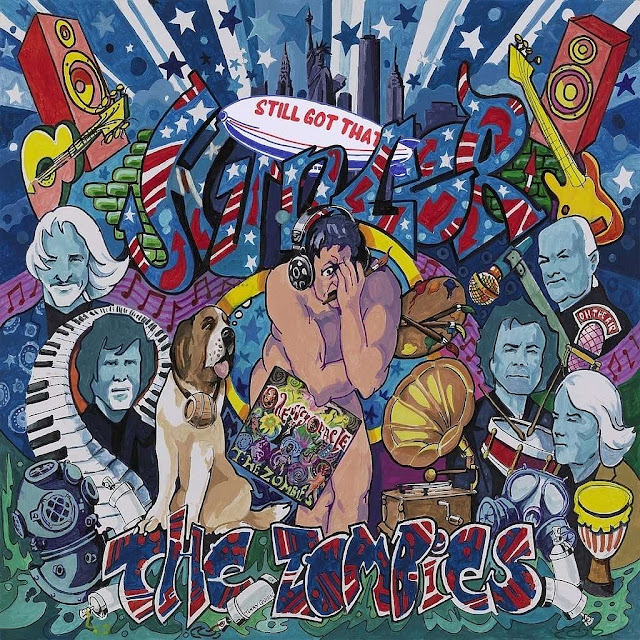 "Still Got That Hunger" was the sixth studio album by English rock band The Zombies, released on 9 October 2015. The band funded production of the album through the crowdfunding web site PledgeMusic, receiving donations from 958 pledgers and reaching 143% of its funding goal. Two of the songs on the album were remakes of earlier recordings by members of the band. "I Want You Back Again" was originally released by the Zombies as a single in 1965 and in the intervening time has been covered in live performances by Tom Petty, a self-professed fan of the band. "Now I Know I'll Never Get Over You" was originally released by Colin Blunstone on his 2009 solo album "The Ghost of You and Me". Rod Argent and Colin Blunstone, two true stalwarts of classy English pop, had reunited after three decades under the moniker of their former outfit, The Zombies.  Their reunion has been enthusiastically embraced by the public, thanks to a hot band, some superlative new material, and a stage repertoire that draws heavily upon their much-cherished catalogue of Zombies and solo hits.

In their day, the Zombies were one of the few English bands of the 1960s that enjoyed true global popularity, with two American number ones, chart records throughout the rest of the world, and a deep and lasting affection for their music. For instance, in early 1967, at a time when their career had almost ground to a halt in the UK, the band played to crowds of over 30,000 in the Philippines. And ironically, right after the band split, their final single “Time Of The Season” quickly became their biggest record – US radio plays for the latter song recently passed the four million mark. The Zombies’ first two American singles, “She’s Not There” and “Tell Her No”, also remain two of the most-heavily spun vintage hits on American classic-rock radio.

But beyond the statistics, the Zombies had several remarkable attributes that set them apart from other artists. The sheer consistent quality of Rod Argent and Chris White’s songwriting is rivaled only by Lennon and McCartney. Building upon the standard R&B and rock’n’roll influences, the Zombies introduced class and sophistication into a genre not noted for either, and in the most natural, unselfconscious way possible. And the songs were lent an extra dimension by the voice of Colin Blunstone, widely acknowledged as one of the finest singers Britain has ever produced. Rod Argent’s keyboard work is regarded as some of the most accomplished and inventive in rock. The Zombies’ canon belongs on the same shelf as the other major players of the mid-1960s such as the Kinks, Yardbirds and Animals; from their debut “She’s Not There” onwards, there was never at any point a drop in quality. The Zombies’ records are some of the best produced and distinctive in all pop music.

More importantly, the popularity of the Zombies’ music, in keeping with their name, shows no sign of dying. Their unsurpassed oeuvre continues to influence musicians around the world, whether they be original fans the stature of Tom Petty or Pat Metheney, or relative youngsters like REM, Beck, Pavement and Paul Weller. And contemporary cutting edge American and UK acts such as Fountains of Wayne, Spoon, Badly Drawn Boy, Belle & Sebastian and Super Furry Animals are just the latest in a long line of musicians to play homage to the Zombies, for thanks to high profile reissues like the definitive 1997 box set Zombie Heaven, each new pop generation has been able to discover for themselves the undiluted magic of the band’s catalogue.

In recent years, when the Zombies have been feted by pop’s hip aristocracy, it has been largely for their swansong, Odessey & Oracle (famously misspelled by the cover artist), from which “Time Of The Season” was taken. It was their second and final album, recorded in 1967 before they went their separate ways, and remains perhaps their greatest artistic statement. Odessey presents an evocation of memory that maybe has yet to be surpassed in pop music, with a peculiarly English yet universal slant on dreams, childhood and the attendant loss of innocence that derives from the passing of both. And it is a record today as celebrated and influential as the Beach Boys’ Pet Sounds or Love’s Forever Changes, recently ranked #80 in Rolling Stone’s 500 Greatest Albums of All Time, and #32 by the U.K.’s New Music Express in a similar list of British albums.

Upon the demise of the Zombies, Rod Argent went on to form the eponymously named band Argent, who had further success in the United States during the 1970s with the anthemic hits “Hold Your Head Up” and “God Gave Rock & Roll To You”. He has since had a varied and successful career in the field of record production, as well as frequently scoring for television and stage. Colin Blunstone meanwhile has remained a familiar chart presence in the UK and Europe through hits like “I Don’t Believe In Miracles” and “What Becomes of the Brokenhearted”, while his back catalogue, studded with gems like the album One Year, boasts a solid cult following amongst musicians and fans ‘in the know’ (in addition to Zombies’ material, Rod and Colin feature excerpts from both of their solo careers in the current show).

In 1998, these two exceptional musicians decided to join forces again after thirty years, cognizant that their musical partnership is far more than the sum of the parts. They also have the added benefit of a splendid, entirely complementary band, which includes former Argent and Kinks bassist Jim Rodford,  his son Steve on drums, and acclaimed session player Tom Toomey on guitar. In 2001, Blunstone and Argent released the first recorded fruits of their collaboration in the album Out Of The Shadows. This was followed up in 2004 with As Far As I Can See…, released in the U.S. by Rhino Records.  Featuring 10 new tracks, plus a re-working of Blunstone’s hit “I Don’t Believe In Miracles”, the album is colored by The Zombies’ trademark minor-key melancholy along with Blunstone and Argent’s explorations of new musical territory.

This is also the first new recording released under “The Zombies” name since Odessey & Oracle - a move Argent had resisted for years, in respect to the band’s legacy. “Ever since The Zombies split up in 1967, we have always resisted re-forming despite being offered lots of money,” explains Argent. “We didn’t put the band back together then because we have always wanted to look forward, and it has always seemed wrong to put the band back together again simply to make a quick buck.” However, commenting on the new album, Rod reveals that the specter of the Zombies is a natural result of his and Colin’s renewed partnership: “When we played the first mixes back, Colin and I were surprised to hear many resonances of our first band on the record, because they weren’t achieved consciously,” says Argent. “Suddenly, and for the first time in all these years, it felt honest and right to include the name ‘Zombies’ somewhere on the album. It still feels important to include our own names as well - a way of expressing something about the future as well as acknowledging the past.”

The album has another special connection to The Zombies’ storied past. Paul Atkinson, one of the group’s original guitarists and a legendary music executive, earned a special A&R credit on As Far As I Can See…for his efforts championing the album. Blunstone and Argent recently played a benefit concert at the Los Angeles House of Blues to honor their friend and bandmate, who sadly died prior to the album’s American release. The album also features former Zombies member Chris White contributing guest vocals on three songs: “Memphis,” “I Want To Fly,” and “Look For A Better Way.” Their return to the concert stage is of particular importance to fans, since many never had the opportunity to see the band live during its brief existence in the 60’s (especially since a large number of their fans were born after the original line-up disbanded!).  Their live performances were recently captured on a double CD and DVD, Live At The Bloomsbury Theatre (released in the U.S. by Rhino in 2007), and their appearances in North America have included the “Little Steven’s Underground Garage” and “HippieFest” tours, as well a stint for Rod Argent in the 2006 line-up of Ringo Starr’s “All-Star Band”.

March 2008 marked a true celebration of joining the old and the new, when the current Zombies line-up was joined onstage by the other surviving original members, bassist Chris White and drummer Hugh Grundy, for a series of special concerts at London’s Shepherds Bush Empire, which featured the first-ever live performances of Odessey & Oracle in its entirety.  This momentous event, awaited by many for decades, was filmed for a future DVD release, and was attended by fans ranging from Robert Plant to members of Snow Patrol.

The Zombies are cited by the mercurial Courtney Love; and as influences by Badly Drawn Boy, Paul Weller, Super Furry Animals, Magic Numbers, Billy Joel, She & Him, Foo Fighters, Fleet Foxes, The Vaccines and the Arctic Monkeys, among others. Recorded for their Golddiggers album, The Beautiful South released their version of  “This Will Be Our Year” as a single. Just recently, Neko Case and Nick Cave recorded “She’s Not There” for the premier episode of HBO’s ‘True Blood’ fourth season.  The Zombies’ songs are regularly covered live by such varied artists as Beck, She & Him and Belle & Sebastian, and used in films and TV shows (‘Dear Wendy,’ ‘Awakenings,’ ‘Kill Bill 2,’ ‘The Simpson,’ among others – evidence that their music really is as fresh and relevant today as it ever was. The Zombies’ touring band features original members Colin Blunstone (lead vocals) and Rod Argent (keyboards & vocals), plus Jim Rodford (bass), Tom Toomey (guitar) and Steve Rodford (drums). They played live dates in the UK in 2009 and again in 2010, also touring that year in France, Spain, and the USA. They kicked off a successful U.S. tour in September, 2011 and returned in the summer of 2012, to even larger and more enthusiastic audiences.