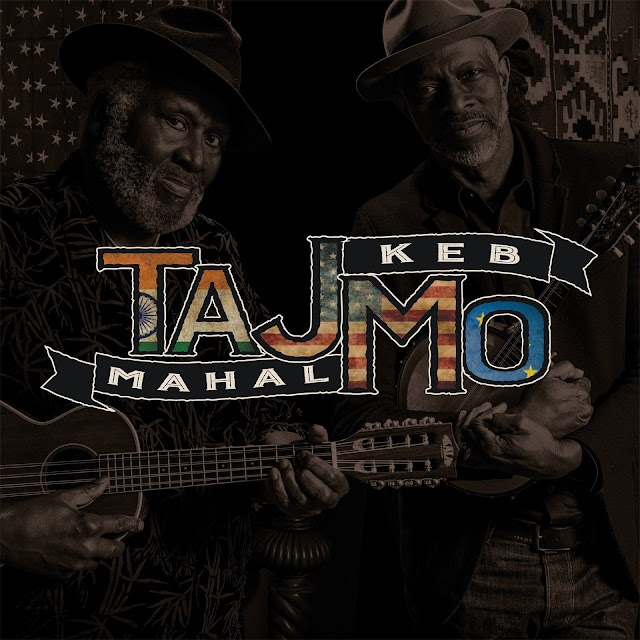 Kevin Roosevelt Moore, known as Keb' Mo', is an American blues musician and four-time Grammy Award winner. He is a singer, guitarist, and songwriter, living in Nashville, Tennessee. He has been described as a living link to the seminal Delta blues that travelled up the Mississippi River and across the expanse of America. His post-modern blues style is influenced by many eras and genres, including folk, rock, jazz, pop and country. The moniker Keb Mo' was coined by his original drummer, Quentin Dennard, and picked up by his record label as a street talk abbreviation of his given name. Keb' Mo' started his musical career playing the steel drums and upright bass in a calypso band. He moved on to play in a variety of blues and backup bands throughout the 1970s and 1980s. He first started recording in the early 1970s with Jefferson Airplane violinist Papa John Creach through a Rhythm'n'Blues group. Creach hired him when Moore was just 21 years old; Moore appeared on four of Creach's albums: "Filthy!", "Playing My Fiddle for You", "I'm the Fiddle Man" and "Rock Father". Keb Mo's first gold record was received for a song, "Git Fiddler", which he co-wrote with Papa John on Jefferson Starship's "Red Octopus". "Red Octopus" hit number one on the Billboard 200 in 1975.

Moore was also a staff writer for A&M Records, and arranged demos for Almo Irving music. Keb' Mo's debut, "Rainmaker", was released on Chocolate City Records, a subsidiary of Casablanca Records, in 1980. He was further immersed in the blues with his long stint in the Whodunit Band, headed by Bobby 'Blue' Bland producer Monk Higgins. Moore jammed with Albert Collins and Big Joe Turner and emerged as an inheritor of a guarded tradition and as a genuine original. Keb' Mo' has appeared on stage (1990-1993) in several versions of the musical Spunk, a play by Zora Neale Hurston a legendary African American playwright from the Harlem Renaissance. His character, Guitar Man, learned while he was an understudy to 'Chick Streetman', played all the actual music in the play while performing. The character of Guitar Man is the foundation for his current stage persona.

In 1994, Keb' Mo' released his self-titled album, "Keb' Mo'", which featured two Robert Johnson covers, "Come On In My Kitchen" and "Kind Hearted Woman Blues". In the Martin Scorsese miniseries 'The Blues', Keb' Mo' states that he was greatly influenced by Johnson. Keb' was the runner-up for Best New Blues Artist at The Long Beach Blues Festival when he was spotted by Steve LaVere who owns the publishing for the entire Robert Johnson song catalogue (1992–93). Keb' Mo's self-titled album was released on Okeh Records, a vintage revival division of Sony Music. In 1996, he released "Just Like You", his second album, which featured twelve songs full of Delta rhythms. He won his first Grammy Award for this album, which featured guest appearances from Jackson Browne and Bonnie Raitt. On June 10, 1997, Moore performed on the television program Sessions at West 54th. He joined musicians Laval Belle on drums, Reggie McBride playing bass, and Joellen Friedkin on keyboards to perform fourteen songs, some from each of his albums. Blues pianist Dr. John also made a guest appearance. This session (known as "Sessions at West 54th: Recorded Live in New York") was shown on television, but was not released as a DVD until late 2000.

In 1998, Moore was involved in the multi-artist project "Begegnungen (Encounter)" by Germany's rock superstar Peter Maffay. They performed together a new version of Mo's "Am I Wrong" on the album and some more songs in the 30 concerts at the arena tour later the same year, documented on the live album "Begenungen Live", released in early 1999. A further guest of Maffay at the Begegnungen album and tour was Sonny Landreth and many more artists from every continent. "Slow Down", his next album, was released in 1998 and featured twelve songs. It earned him a second Grammy Award. The album begins with the song "Muddy Water", a tribute to Muddy Waters. It also features a song entitled "Rainmaker", which had been released previously on his first album, eighteen years prior. His fourth album, "The Door", was released in 2000. The same year, Keb' Mo' released "Big Wide Grin", a children's album featuring many songs from Moore's own childhood, along with some newer children's songs and some by Moore himself. In 2001, he appeared on Sesame Street with Kermit the Frog, Grover, Elmo, and other muppets performing the song "Everybody Be Yo'self". The album includes an original arrangement of "America the Beautiful," which he performed years later on the 2006 series finale of The West Wing, "Tomorrow," in which he appears as himself to perform the song at the inauguration of (fictional) President Matt Santos.

In 2003, Martin Scorsese collaborated with many blues musicians including Keb' Mo' to put together a series of films entitled 'The Blues'. Following its release, several albums were released in accordance, some were compilations, some new collaborations, and Keb' Mo' released an album in the series featuring a handful of existing recordings from "Keb' Mo'" to "The Door". On February 10, 2004, he released "Keep It Simple" which earned him a third Grammy Award, again in the contemporary blues genre. Later that year, he released his sixth studio album, "Peace... Back by Popular Demand". On January 28, 2018, Keb Mo won his fourth Grammy for best Contemporary Blues Album, for his collaboration with Taj Mahal, "TajMo". Moore released "Suitcase", on June 13, 2006. His touring band following the release included Reggie McBride on bass, Les Falconer III on drums, Jeff Paris on keyboards, and Clayton Gibb on guitar. On October 20, 2009, Keb' Mo' released the live album, "Live & Mo'". "Live & Mo'" was the tenth studio album by Keb' Mo'. It was released on October 20, 2009. It was his first album through the Yolabelle International label which he started after leaving Sony Music in 2004. It is his first live album release, and it is intertwined with studio tracks hand-picked by Mo' himself to go side by side with the live tracks. The album is underlined with soul, and jazz, and has a laid-back feel to it. At the 2010 Crossroads Guitar Festival, Keb' Mo' performed an acoustic set with Stefan Grossman and an electric set with Vince Gill, Albert Lee, James Burton, Earl Klugh and Sheryl Crow. He joined the finale with most of the day's performers.

In early 2014, he was nominated for three Grammy Awards for Best Americana Album ("BLUESAmericana"), Best American Roots Performance (“The Old Me Better”) and Best Engineered Album Non-Classical ("BLUESAmericana"). In May, he appeared alongside Metallica at MusicCare' 10th Annual MAP Fund Benefit Concert at Nokia honoring Ozzy Osbourne and Jeff Greenberg. In October 2014 he honored the Everly Brothers, at the Rock and Roll Hall of Fame’s 19th annual Music Masters® Series, and in November he honored Mavis Staples alongside Bonnie Raitt, Gregg Allman, Taj Mahal and Grace Potter, at Chicago’s Auditorium Theatre for celebration of Staples’ life and career in honor of her 75th birthday. Also in late 2014 he was featured on a Jackson Browne tribute album, "Looking Into You: A Tribute to Jackson Browne". In 2015 his album, "BLUESAmericana", won the 'Contemporary Blues Album' category at the Blues Music Awards. He has been supportive of charity Playing For Change since its inception and recently appeared in a video with Keith Richards' singing Bob Marley's "Get Up, Stand Up". He appeared on two tracks from the "Playing For Change: Songs Around The World" that was released on June 17. The album had over 180 musicians from 31 countries, including Keith Richards, Sara Bareilles, David Hidalgo, Cesar Rosas, and Taj Mahal. He donates 5% of "BluesAmericana" to the charity.

In late 2015 he performed at a special concert hosted by Barack Obama called 'A Celebration of American Creativity: In Performance at the White House'. It was shot and filmed in the East Room of the White House. Other performers included Smokey Robinson, James Taylor, Buddy Guy, Queen Latifah, Usher, Trombone Shorty, MC Lyte, Audra McDonald, Esperanza Spalding, Brian Stokes Mitchell and Carol Burnett. It commemorated the 50th anniversary of Lyndon Johnson's National Foundation on the Arts the Humanities Act. Keb' Mo' released a live album, "Keb' Mo' Live - That Hot Pink Blues Album" on April 15, on Kind of Blue Music/RED Distribution. Keb' Mo' partnered up with Taj Mahal to release a joint album "TajMo" on May 5, 2017. The album has some guest appearances by Bonnie Raitt, Joe Walsh, Sheila E., and Lizz Wright, and has six original compositions and five covers, from artists and bands like John Mayer and The Who. The album won the 2018 Grammy for Best Contemporary Blues Album.

In 2004, Keb' Mo' participated in the politically motivated Vote for Change tour alongside Bonnie Raitt and Jackson Browne, with whom he originally recorded the title track from the album "Just Like You". Keb' Mo' is part of the No Nukes group which was against the expansion of nuclear power. In 2007, the group recorded a music video of a new version of the Buffalo Springfield song "For What It's Worth". Keb' Mo' uses several types of guitars, including electric guitars, acoustic guitars and resonator guitars. He has a preference for red guitars, as he says on his website: "I have a history with red guitars. My first electric was a red guitar." He mostly plays on a red custom Fender Stratocaster which features two single-coil pickups, and one humbucker and is much modified from a regular Stratocaster model. On stage, he prefers a red Hamer guitar with Gibson P-100 pickups. Two of his electric guitars were lost in the 2010 Nashville flood: an Epiphone Sheraton and a Danelectro Selectomatic. He owns a variety of acoustic and resonator guitars, including a Gibson artist model, a guitar made for him by James Goodall, a National Style N, a National Resorocket, a Gibson ES-335-shaped resonator guitar with a P-90 pickup he bought in a Nashville club and got fixed.