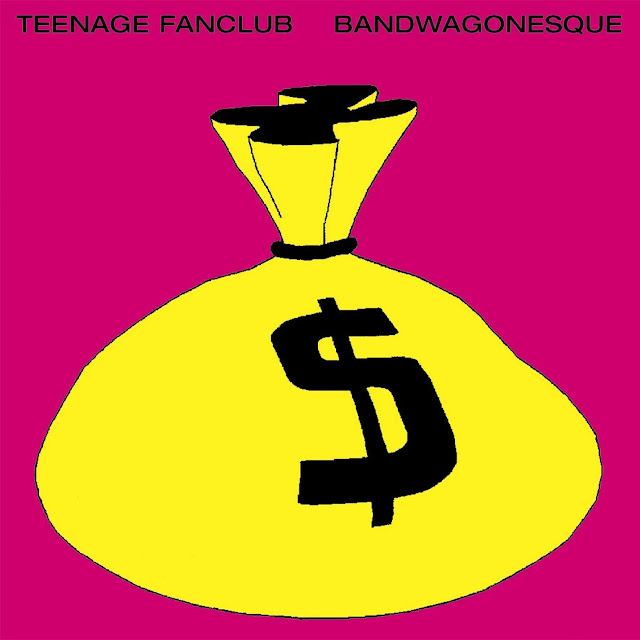 Outside of Glasgow (quite literally), Bellshill in Lanarkshire must be Scotland’s epicentre of indie-pop, and with ambassadors Teenage Fanclub, how can one argue with that assertion. Growing up with The Teenage Fanclub in the 90s, and sticking with them decades on, the spotty college-kid fans of yesterday are now willing to play them loud and proud, back-porch-stylee, from their multi-storey verandas. Vocal frontmen-messengers-three, stalwarts Norman Blake, Raymond McGinley and Gerard Love, have never wavered from their sludgy power-pop agenda, albeit with a plethora of other alternative projects in their way. Equally at home at refreshing the wheelie-bin of cult acts such as Big Star, Badfinger and Dinosaur Jr., Teenage Fanclub are to Bellshill what Neil Young is to Toronto.

Blake had been the most active musically of the three singer-songwriters (and guitarists), his earliest work with Duglas T. Stewart in mid-80s combos, The Pretty Flowers and BMX Bandits; the former act was also a stamping ground for Vaselines-bound Frances McKee, while The Soup Dragons alumni (including his Faith Healers cohort, Sean Dickson), were integral in getting the latter act off the ground. Not content with relying on small change from these rudimentary combos, The Boy Hairdressers were formed in 1986 from the ashes of The Pretty Flowers, although when Stewart and Dickson were weighed-under by other aforementioned commitments, Blake had to enlist the help of McGinley (guitar), Joe McAlinden (violin, bass), Jim Lambie (vibraphone) and Francis Macdonald (drums), to record the quintet’s one and only platter for 53rd & 3rd: "Golden Shower", released January 1988.

Teenage Fanclub emerged out of the pack when Blake, McGinley and Macdonald recruited third singer (and bassist), Gerard Love. Signed to Paperhouse Records (Matador in the US), the indie-rock quartet suffered their first casualty when Francis went off mid-session to join that other Glasgow institution, The Pastels; his berth was filled by Brendan O’Hare. From the inspired chaos of the abrasive "Everything Flows" single, and its sludgy parent debut album, "A Catholic Education" (1990), Scotland had something to compete with burgeoning post-Neil Young grunge scene about to explode from over the big pond. To allegedly appease a 2-set contract with Matador Records and delivered in double-quick spare time after the recording of the next set proper for new masters, Creation (Geffen in the States), the sub-standard, "The King" (1991), was not what was expected of the mighty TFC. The fact is that under direction from producer Don Fleming, the intentionally sprawling set should’ve been either limited at the pressing stage, rather than withdrawn after only one day in the shops; covers of Pink Floyd's "Interstellar Overdrive" and Madonna's "Like A Virgin", gives one some impression of the haphazard nature of this misnomer.

Still, although disgruntled at this cheap shot, patient fans were back on board when `Star Sign’ and `The Concept’ (songs from their subsequent Top 30 set, "Bandwagonesque" (1991), also hit a minor placing in the charts. The term slacker rock was surely coined with this bunch of cheeky Weegie wide boys in mind and, if it was lazy to compare their honey-in-the-dirt melodic discord with Dinosaur Jr., that was nothing compared to the laid back, laissez faire philosophy that fuelled, if that’s not too strong a word, Teenage Fanclub’s ramshackle racket, both on stage and in the studio. By the release of the aforementioned Fleming-produced "Bandwagonesque", the quartet were sounding more professional, crafting an album of languorous harmonies and chiming guitar ("What You Do To Me", "Alcoholiday" and "Is This Music ?") that was a thinly veiled homage to Big Star, as well as taking in such obvious reference points from The Byrds, Buffalo Springfield, The Beach Boys et al. Ironically, rather than propelling Teenage Fanclub into the big league, the album seemed instead to merely rekindle interest in Big Star’s back catalogue and after a honeymoon period of being indie press darlings, the backlash was sharp and swift. The fact that the self-produced, "Thirteen" (1993), the title taken from Alex Big Star’s best Alex Chilton-penned number, lacked their trademark inspired sloppiness didn’t help matters any. Not that the band were overly concerned. They crafted modern retro more lovingly than most, and had a loyal following to lap it up. While it reached No.14 in the charts and showcased a couple of fine 45s, "Radio" and "Norman 3", it’ll always be remembered for its epic Neil Youn & Crazy Horse-esque curtain-closer, in homage to Byrds geezer, "Gene Clark".

A subsequent charity song for Bosnia under conflict ("Mine Exclusively’") recorded with Alex Chilton, was available to buy direct from the New Musical Express. Better still, was an unlikely amalgamation of rock and rap, `Fallin’’ (a minor UK hit), from the auspices of Teenage Fanclub and De La Soul, spawned from the Judgment Night movie soundtrack. The Fannys, with Paul Quinn replacing the Telstar Ponies-bound O’Hare, further developed their niche with "Grand Prix" (1995), and if it was that reliably trad West Coast-via-Glasgow-roots sound one was after then Teenage Fanclub were your bag. Once again, with the songwriting credits split three ways (as with the affiliated vocals), Blake’s "Neil Jung" and "Mellow Doubt", Love’s "Sparky’s Dream" and "Don’t Look Back", and not forgetting McGinley’s "Versimilitude", were defining moments from Caledonia’s own Crosby Stills & Nash. While Teenage Fanclub wore their influences more proudly than any other group (with the exception of Oasis), they did it with such verve and style that it would’ve been churlish to have written them off as mere plagiarists.

Their next effort, "Songs From Northern Britain" (1997), was their most considered release to date, sharpening up their sound and arrangements to an unprecedented degree. But if that’s what it took to come up with something as engagingly swoon-some as McGinley’s "I Don’t Care" or Love’s "Ain’t That Enough", no one was going to make much of a fuss. While the Top 3 set linked a route from the Highlands of Scotland (as depicted by a group photo-shoot taken by David Milne) to the West Coast of America, further hits came via "Start Again" and "I Don’t Want Control Of You". Now on the roster of the mighty Columbia Records, Teenage Fanclub (complete with the addition of former BMX Bandits man Finlay MacDonald) returned to the fold via album No.6 proper, "Howdy!" (2000). Slightly back to basics and reminiscent of Big Star (once again!) and The Hollies, the album only just managed to gain a Top 40 placing; the appropriately-titled single spawned from it, "I Need Direction", only just dented the Top 50. Drummer and original member, Francis Macdonald (no relation to Finlay, incidentally), subsequently superseded Quinn for a second single collaboration ("Dumb Dumb Dumb") with daisy-chain hip hop stars, De La Soul, although this failed miserably with the record buying public.

Teenage Fanclub were back to basics again (this time on Stephen Pastel’s Geographic imprint) come their short-but-sweet set, "Words Of Wisdom And Hope" (2002), a record that saw them collaborate with former Half Japanese songwriter, Jad Fair. Ditching their more commercial rock flair, Teenage Fanclub went for something a bit rougher, all thanks to Jad, hammering out tracks "I Feel Fine", "Vampire’s Claw" and `Near To You" (the single) to brilliant effect. A link-up with sound sculptor John McEntire perhaps wasn’t so eyebrow raising giving the traditionally string link between Glasgow and the American underground. And recorded at John’s Chicago studio, "Man-Made" (2005) wasn’t such a departure from the band’s hippy-harmony sound. The main difference was the Tortoise guru’s beavering keyboard (and even harpsichord) filigree, spacing out Teenage Fanclub’s West Coast signature to the point that it occasionally resembled "Eight Miles High"-era Byrds, or a more adept garage-psych combo instead of the usual Big Star and Crosby Stills & Nash.

A Top 40 entry, the album preceded the band’s contribution to "Late Great Daniel Johnston: Discovered Covered" (2006), a half covers and half originals tribute (also featuring the likes of Beck, Eels, Calvin Johnson and Bright Eyes) where the Glaswegians performed "My Life Is Starting Over" along with Jad Fair. Over the course of their long-standing career, Teenage Fanclub covered more than their fare share of songs, and here are some B-sides one might’ve heard: "Don’t Cry No Tears" and "Burned" (Neil Young), "The Ballad Of John And Yoko" (The Beatles), "Life’s A Gas" (T. Rex), "Free Again" and "Jesus Christ" (Alex Chilton), "Try And Stop Me" (The Creation), "How Many More Years" and "Nothing To Be Done" (The Pastels) and a handful of others. Extending the band to become a sextet, with the arrival of bassist Dave McGowan, Teenage Fanclub’s long lay-off was put aside with the 20th anniversary set, "Shadows" (2010). Deciding to self-finance the record on their own PeMa imprint (Merge in the States), the choruses were easy on the ear, verging on twangy country folk-rock. Blake’s "Baby Lee", Love’s "Shock And Awe" and McGinley’s "The Past", were probably best served up to acolytes of the Laurel Canyon, rather than of "Northern Britain", but hey: Old Blighty was always into a nice melody, or two.

Of a couple of extracurricular Teenage Fanclub spin-offs, Norman Blake’s Scottish-Welsh link-up with Euros Childs (ex-Gorky's Zygotic Mynci) was the first to be released. Simply titled, "Jonny" (2011), the eponymous album also featured McGowan and BMX Bandits’ Stuart Kidd (on drums), and there was plenty to pick from the Wings-styled 17 ditties on show; "Wich Is Wich", "Candyfloss", "English Lady" et al, had elements of folk, glam and baroque psych-pop, the bulk with leanings to Childs’ side rather than that of Blake’s; the indie folk-rock act, Snowgoose, featured McGowan and Kidd, plus Blake on guest vox. Gerard Love duly extended his abilities to form Lighthips, a solo project that took in veteran refugees such as International Airport’s Tom Crossley, Teenage Fanclub’s past and present (O’Hare and McGowan), plus Belle & Sebastian’s Bob Kildea. Although not that far removed from Teenage Fanclub itself, "Electric Cables" (2012), enabled Gerry to float his dreamy-pop style beyond the confines of his day-job band. Received with critical fervour, his pastoral garden of earthly delights come no better than "Sweetness In Her Spark", "The Warmth Of The Sun", "Stretching Out" and "Sunlight To The Dawn".

Now a resident of Canada after marrying a local lass, Norman Blake duly teamed up to form The New Mendicants, with fellow strummer Joe (of The Pernice Brothers) and drummer Mike Belitsky (of The Sadies). After a well-received "Australia 2013" E.O., the cosmopolitan trio delivered their debut set, "Into The Lime" (2014), think Hollies in indie mood, as unlikely as it seemed. Six long years since the 5-piece Teenage Fanclub had breached the airwaves with their bright and breezy, Byrds and Big Star-like folk-pop, 2016’s Top 10 "Here" stopped the rot. As with previous outings, tracks were individually offered up by the Caledonian Crosby Stills & Nash: Blake, Love or McGinley. Brandishing their melancholy melodies of mass despair-ation like there was no tomorrow, the anthems were of a lo-fi nature, transcending time and space between the warm and cosy ("With You", "I Have Nothing More To Say" and the cerebral "Steady State"), to the sharp and testing ("I’m In Love", "The Darkest Part Of The Night" and the starry-eyed "Live In The Moment"). Was anyone else shocked when they guested on the political Sunday morning Andrew Marr show ? The times were a-changin’.