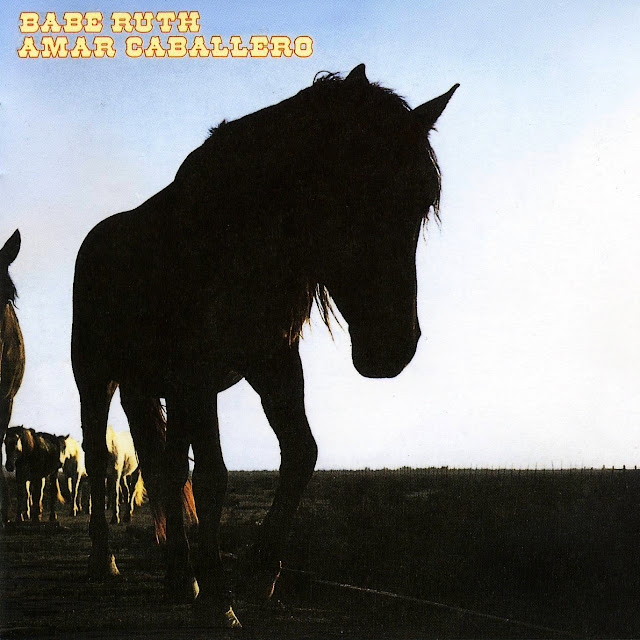 Living up to the legendary status of American baseball kingpin, Babe Ruth, was going to be as tough as the player himself, and coming from the heart of Hertfordshire in England, would make it somewhat tougher for the Hatfield-based 70s prog/hard-rock combo. Despite this, it was in North America, rather in Britain that Babe Ruth made their mark. The power-thrusts of teenage sensation Janita/Jenny Haan (and the solo guitar bursts of Alan Shacklock) were the group’s sex-on-legs focal point; her distinctive outfits and banshee screech recalling a raw Janis Joplin or Annie Haslam. Formed at first in 1971 as Shacklock, both Alan and Jenny (she’d spent some of her youth living in the States) enlisted other likeminded musicians Dave Hewitt (bass), Dave Punshon (piano) and Dick Powell (drums), who’d superseded original Jeff Allen, cemented their reputation as a promising live act with a debut album, "First Base" (1972); it must be noted that attendant funky shouter "Wells Fargo" was their inaugural Harvest Records 45, and not an un-associated Decca release in ’71 by Baby Ruth, "Rupert’s Magic Feather".

Consisting of half a dozen prog-length dirges, Haan could slide between the scales of pensmith Shacklock’s power-driven licks on `Joker’, while the plucky piano performance of Punshon was effective on the likes of Frank Zappa’s instrumental "King Kong". Surely one that got away in a rush for more conventional prog, `Black Dog’ (a song scribed by Jesse Winchester), matched that of their take on Morricone: "The Mexican"; the Spaghetti Western pattern was duly repeated on the "Wells Fargo" flipside, "Theme From A Few Dollars More". Sadly, although it boasted the sleeve design illustration of Roger Dean, the LP failed to chart in the UK, but went gold in Canada; it also dented the US Top 200. Taking a renewed funk-meets-orchestra approach, and with Powell and Punshon making way for Ed Spevock and Chris Holmes respectively, Amar Caballero" (1973), fell short of a home run or two. But for the provocative "Gimme Some Leg" (highlighting additional words by guest percussionist Gasper Lawal), "Lady" and a cover of The Capitols' "Cool Jerk", the group looked to a spent force.

Personnel changes seemed to take a three-strikes-and-you’re-out policy for Jenny and her Babe Ruth crew, a crew that now introduced Steve Gurl (from Wild Turkey) to sit in for the departing Holmes. Their self-titled "Babe Ruth" (1975) set positioned the quintet inside the US Top 75, and in Canada they had a massive following; larynx-lubed Haan could give Rush’s Geddy Lee a run for his high-pitched money any time. A third Ennio Morricone instrumental recreation, "A Fistful Of Dollars", gave Jenny an opportunity to take a breath, but surely she was why one bought into the Babe. A duet with Shacklock on flop 45, "The Duchess Of Orleans" and on William Bell and Booker T’s "Private Number", plus a further move into R&B/soul territory through Curtis Mayfield’s "We People Darker Than Blue", expanded her street cred abroad, although at the expense of the Brit-prog market. Shacklock chose this period to hand in his notice, his replacement being another Wild Turkey exile, Bernie Marsden, who’d later feature in numerous hard-rock acts including Whitesnake. Slicker and a return to harder-edged territory, Haan was again at her prime, raucous best on "It’ll Happen In Time", "Fascination" and "Tomorrow", three tracks from fourth album "Stealin' Home" (1975).

Then, the unthinkable, the loss of figurehead Janita Haan, who, one understands left on her own accord with Hewitt; the pair pursuing other directions in Jenny Haan’s Lion; as Jenne Haan, she managed only one single for E.M.I. "We Drove Em All Mad". In the meantime, a rather down and out Babe Ruth (featuring newbie singer, Ellie Hope, and bassist Ray Knott) completed one more LP, the forgettable "Kid's Stuff" (1976). Before Babe Ruth took their final bow, Marsden was replaced by 17-year-old Simon Lambeth. The cult of Babe Ruth, the band, continued when "The Mexican" was given a disco makeover by The Bombers in the late 70s, a feat recognised by re-mixer to stars (Madonna, et al) Jellybean Benitez, who re-styled the song, and a reinvigorated Haan, into underground dance-floor hits; in 2010, Deekline & Tim Healey featured/credited Babe Ruth song, "The Mexican", on yet another single effort. Probably spurred on by all the fuss, the original Babe Ruth (Jenny now under her married name, Janita Haan Morris) stepped up to the mark once again’ their 2006 digital comeback "Que Pasa", finding a home at Revolver Records in ‘09. Full of Western promise and Mexican flavours (via "Santa Ana" and Jerry Lordan’s "Apache"), the mainly Shacklock-penned set was worthy of inspection, if just to hear the wonderful Haan on versions of a re-vamped "The Mexican Millennium", the title track and a smouldering "The Blues".