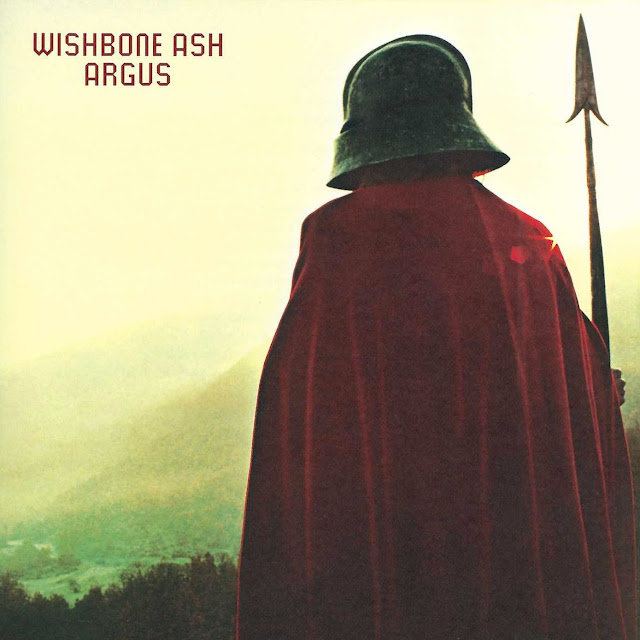 "Argus" is without question Wishbone Ash’s magnum opus. That much is hard to argue. What’s less clear is whether this is a progressive rock band; a hard-rocking yet innovative group of skilled musicians; just four guys who got lucky; or something else. ‘Something else’ is probably the closest answer. I have several other Wishbone Ash albums, and while a few of them are quite good, none exudes the kind of calm sense of confidence and self-assurance that this one does. The boys in the band must have felt pretty cocky when they laid down the last tracks on what they must have known would be considered a masterpiece.

There’s nothing particularly innovative about the style or arrangements of the seven songs which make up this album; heck, the Allman Brothers were doing the exact same kind of stuff but with a bit more flair, percussion, and soul far to the west of Devon about the same time. Country Joe & the Fish and Spirit were among many bands that predated Wishbone Ash in the realm of folksy, blues-tinted and guitar-driven mood music. There are easily dozens of similar bands that put out similarly inspiring sounds in the early seventies (Ramatam, Thee Image, Cactus, etc.), but none of these have left the kind of lasting impression that Wishbone Ash did with this album. Every track is a self-contained expression of peace, nostalgia, longing, sadness, and beauty, all rolled into one and lain out like a bare soul for the reflection and enjoyment of all who have partaken of them. The twin guitars and poignant harmonizing vocals have stood the test of nearly thirty-five years time flawlessly. Brilliant stuff in every respect.

The opening track "Time Was" would have been enough to make this album worth picking up all on its own. The gentle guitar and mellow singing that lead off the song give the impression this is a folkish melody, but eventually the tempo picks up and this turns into a touching lament-turned-love song. The soaring guitar licks and driving beat work themselves into a full-blown jam for what seems like an eternity before finally bringing it home with a flourish. Every time I hear this song (really, every time I hear this whole album) I wish I was sitting behind the wheel of an old muscle car just cruising down a coastal highway taking in a cool summer breeze, free of all the world’s crap and with a busty blonde in a billowy dress at my side. Daydreams were made for this kind of music, and vice versa.

"Sometime World" evokes many of the same emotions, but I think this is the track that first got people calling this progressive music. It isn’t, maybe, but the tempo shifts from ballad-like crooning into driving twin-guitar intensity is an absolute rush if you hear it with the car stereo’s volume turned to eleven. Try it some time: if your dial doesn’t have an 11, paint one on. Feel free to sing along too, especially if you’re in that muscle car and screaming down the highway. No one will care. I really shouldn’t drive while listening to music, I think. The timing of "Sometime World" seems designed to get one’s blood rushing to jut a little beyond the safety point just so "Blowin’ Free" can bring it back down to earth. Now that’s a great production technique! Still the twin guitars carry the rhythm, but this is closer to that folksy side of the band that makes them so endearing. I can think of a whole pile of ‘girl I can’t quite reach’ songs like this one from the seventies, but this one not only wears the scars of experience, it does it while seeming to celebrate the gut- wrenching experience of longing that so many of us have forgotten over the years. This one will bring those feelings rushing back, and will probably get you thinking about some old girlfriend as well. Enjoy.

"The King Will Come" is the rockingest song of the apocalypse ever made. At times it almost seems like a celebration. It just occurred to me that one of the great things about this album is that it makes the journey through the lands of a hundred human emotions, and it showcases each one with a knowing resignation that each of these emotions and experiences is essential to what makes us human. I wonder if these guys were into Zen or something ? Maybe. That wizened gristle can be heard in "Leaf and Stream" as well as anywhere else on the album. This acoustic and poetic folk ballad forms a peaceful interlude before the boys kick things up again with "Warrior", a war-cry for any of a thousand races who have pledged their souls to secure the freedom of their own destiny. This one brings me back to the real point of the album, the loosely-coupled theme of struggle and conquest and finally peace.

The peace comes with the aptly-titled "Throw Down the Sword", a reflective anthem of searching. The guitar work here is rather subdued and the vocals a bit discordant, full of the raw emotion of a weary soul. The sense of the uncompleted journey is completely intentional I suspect, and mirrors the unfilled search for meaning and conclusion that we all seem to live every day. A poignant ending to a brilliant album. It’s kind of frustrating that Wishbone Ash never again was able to capture the combination of seamlessly precise musicianship and honest emotion that this album evokes. But I suppose if they had it would only have served to cast a shadow on this classic, which would have been unfortunate in some ways. This is a classic, and one that belongs in every music lover’s collection.