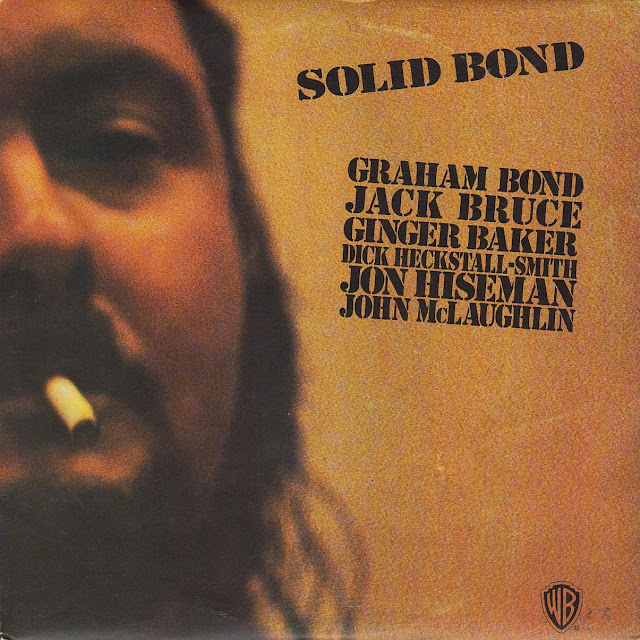 When "Solid Bond" was issued in 1970, it was no surprise that its cover prominently billed Jack Bruce, Ginger Baker, John McLaughlin, Jon Hiseman, and Dick Heckstall-Smith in addition to the man who actually led the band who recorded the material. For the leader of the Graham Bond Organisation was, in 1970, less celebrated than any of the afore mentioned musicians, particularly in the United States, where Bruce and Baker (as part of Cream), Hiseman and Heckstall-Smith (as part of Colosseum), and McLaughlin were all far more widely known than keyboardist-singer Bond himself. Yet as serious fans of 1960s British rock know, Bond made a hugely underrated contribution to blues-rock as leader of the group in which these musicians played before moving on to more commercially successful projects. And while "Solid Bond" might have at first glance seemed to be a collection of leftovers issued to exploit the fame of Bond's one-time sidemen, in fact the recordings, some from 1963, when Bond was still playing jazz, and some from 1966, when he'd fully delved into an idiosyncratic mixture of blues, rock, jazz, and soul, were not just of considerable historical interest, but also of substantial musical merit.

The three tracks on "Solid Bond" from 1963 were likely the most hotly anticipated by 1970 rock fans owing to the presence of Bruce, Baker, and McLaughlin, yet at the same time probably not at all like what most such listeners were expecting. Recorded live at London's Klooks Kleek club, these present the Graham Bond Quartet, as the band were then known, as a rather straightforward modern jazz outfit. Bond at this point was concentrating on alto sax rather than keyboards; there were no vocals; and, despite the inclusion of a Jack Bruce number titled "Ho Ho Country Kicking Blues", there was barely a hint of the blues and R&B that would by the following year supersede jazz as the band's main influences. Bond and McLaughlin split the composing credits for "The Grass Is Greener", while the third number, "Doxy", was a cover of an oft-interpreted tune by jazz sax great Sonny Rollins. Still, it's a valuable document of the musicians' little-known (in 1970, at any rate) straightahead jazz roots, though Bond and his group left these behind soon after McLaughlin left and saxophonist Heckstall-Smith joined in late 1963. Over the next couple years the Graham Bond Organisation, as they billed themselves, would record a couple LPs and a few singles that saw them embrace the British R&B boom wholeheartedly, albeit with a jazzier spin than most of the bands on that scene, emphasizing Bond's demonic organ and growling vocals.

The bulk of "Solid Bond", however, comes from a 1966 session recorded not long after Bruce and Baker had teamed with Eric Clapton to form Cream. With Baker replaced by young jazz veteran Jon Hiseman, the group entered the studio to cut nine tracks as a keyboards-sax-drums trio. Just as much as the mid-'60s recordings by the Bruce-Baker lineup, these reveal Bond as an originator of a highly original and invigorating blues-rock-R&B-jazz fusion, though owing to unusual circumstances they wouldn't see the light of day for several years. As Harry Shapiro reports in his 1992 biography Graham Bond: The Mighty Shadow, the material was recorded after the group were given 500 pounds to make a record by Polydor, the session for all nine tracks taking place at London's famed Olympic Studios between midnight and 6am. Graham and Dick were both in worlds of their own, remembers Hiseman today. I negotiated the deal and chose the studio with Eddie Kramer. An engineer most famed for working extensively with Jimi Hendrix shortly afterward, Kramer had already worked with Jon when Hiseman drummed on British jazz pianist Peter Lemer's album Local Colour.

At the time the trio entered the studio, continues Jon, Graham was incensed at what he saw as a betrayal when Ginger forced Jack from the band and then a few months later left it to form Cream with Jack. Partly out of pique and partly because the band was always in such financial trouble, he decided to play the bass with his left hand. This gave everybody a lot of freedom and I was able to develop my two bass drum playing without muddying up the bass parts. As I remember my goal was not to make any concessions to recording (which was very usual then) and to capture the live sound of the band; to that extent I think these tracks were very representative of the live show. I was most pleased with the sound at the time and it was a magical experience for me, and was the start of my real interest in recording and producing that led to me building my own studio in the 1982. Oddly, three of the songs ("Neighbour Neighbour", "Walkin' in the Park" and "Last Night") were re-recordings of tunes Bond had already done with the Bruce-Baker lineup on the Organisation's two mid-'60s LPs, while a fourth, "Long Legged Baby" had been cut by that band on their 1964 debut single. A fifth, "Only Sixteen" (a Bond original, not the famous Sam Cooke hit), had been in Graham's repertoire for some time, as he'd performed it on the BBC in 1965. "Contrary to popular belief there was always a shortage of material," Hiseman explains. "Graham, deep into a serious drug habit, was not very productive. Having talked up the chance to record for months he then had very little material, hence the repeats. Actually he never wrote enough to be able to weed out poor material or to give others a chance to express views. Graham was not critical at all of his own work. If he had managed to write it, it was great."

But Bond did come up with some quality new compositions that he recorded for the first time on this night. "Springtime in the City", "Can't Stand It" and especially "It's Not Goodbye" have the menacing quality unique to Graham in the British R&B/rock world, while "Green Onions" is a liberally jazzy interpretation of the classic Booker T. & the MG's instrumental. "I don't think 'copying' was part of Graham's vocabulary," observes Hiseman. "He considered himself a creative genius and tried always to surround himself with 'originals.' He was bright enough to realize that copies didn't count." Yet while the nine tracks would have provided the foundation for a solid LP, they would stay in the vault for some time. As for the 500 pounds they'd been given by Polydor to make the record, says Hiseman, "at the time both Dick and I were convinced Bond spent the money on heroin. It was the band's money, not just his, and we never saw a penny from those recordings. The personnel changed at Polydor at that time, and the chap who commissioned the recording was replaced. His successor hated the whole idea of Graham's music and his flamboyant outfits. His job was to get hits for the company and Graham's was not hit music, something Graham never came to terms with."

Indeed, the Graham Bond Organisation would not release an LP while Hiseman was in the band from around mid-1966 to late 1967, when he and Heckstall-Smith departed. After playing together briefly in John Mayall's Bluesbreakers, the pair soon formed a formidable blues-jazz-rock group of their own, Colosseum. Fittingly, the first track of Colosseum's debut album was a cover of Bond's "Walkin' in the Park", which Hiseman feels is Graham's best song, his classic contribution. Colosseum nearly got it away as a single hit nearly. According to Harry Shapiro's biography, "Solid Bond" was assembled in 1970 when the 1966 tapes, together with the 1963 live recordings, were sold to Warner Brothers for 5000 pounds. "Considering they were recorded in six hours the tapes must have been raw," says Hiseman in retrospect. "But I 'produced' the sound in that I spoke to Eddie Kramer about how I wanted it to sound, very upfront, and he agreed. When we were having trouble getting an upfront sound out of Lansdowne Studios with Colosseum I remember playing these tapes to Colosseum manager Gerry Bron as an example of what I was looking for and he was impressed."

Sadly, Bond never found the success his celebrated sidemen enjoyed in his own post-Organisation career, ending his life by throwing himself in front of a London tube train in 1974. But Hiseman retains fond memories of his one-time bandleader, summarizing, "I had a wonderful adventure with Graham and his madness has always had a place in my heart. It was an honor that he saw something in an amateur drummer and encouraged it by persuading me to turn professional in his band. If nothing else Graham taught me how not to run a band and I've tried not to live up to his example."