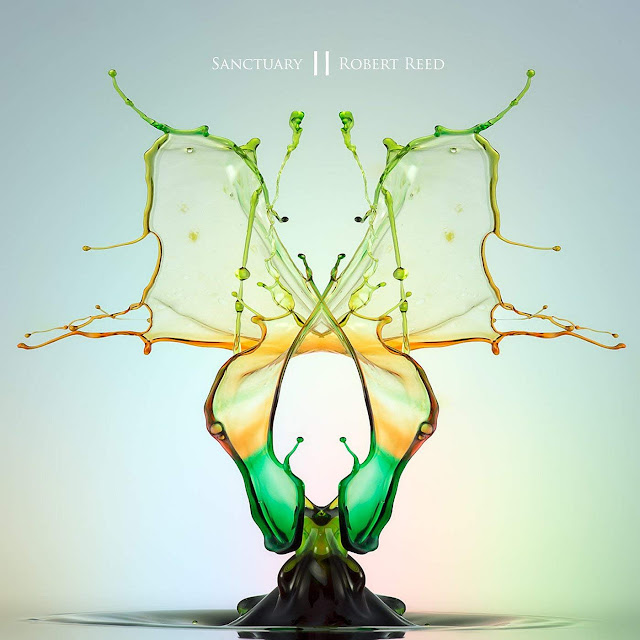 Welsh musician, producer and composer Robert Reed is mostly known for this association with female fronted proggers Magenta (as well as the large-scale if somewhat forgotten Kompendium project from 2012 that boasted the contributions of Steve Hackett, Nick Beggs and Mel Collins amongst others), but he also issues solo releases, currently focusing on a set of primarily instrumental `Sanctuary' works, the second release under that banner we find here arriving two years after the striking 2014 debut. The first album was frequently influenced by Mike Oldfield's classic era of works (completely by Reed's own admissions, though!), and the artist again takes a multi-instrument approach for another grand two-part vinyl length suite of symphonic passages filtered with Celtic and folk flavours, alternating acoustic/electric sections and chanted world elements, all meticulously weaving together with a careful sense of purpose and flow.

In addition to embracing Mike Oldfield's approach (as well as utilizing drum and recorder contributions from former Oldfield collaborators Simon Phillips and Les Penning), there's a rich and wide variety of influences peppered throughout `Sanctuary II' that should be pointed out, so that this project is not merely dismissed as simply some hero-worshipping remake. Looking at some of the highlight moments, the welcoming magical keyboard fanfare alongside crashing percussion that opens the album almost instantly reminds of the more uplifting moments of Yes and in particular Rick Wakeman's grandiose earlier solo works. Warm hand claps and Reed's reaching Flower Kings and dramatic David Gilmour-like guitar strains weave between female- chorus worldly chanting vocals, twinkling pretty chimes and Angharad Brinn's sighing ethereal voice.

There's plenty of soothing and reflective classical elegance and spiralling folk arrangements with flamenco-like ravishing guitar runs, whimsical recorder, fancy accordion and prancing madrigal flute-lifted interludes, with a cool fusion of heavier guitar bite and Simon Phillips' pounding drumming surprisingly emerging in a few brief moments. A spirited folk whimsy dances through Steve Hackett-flavoured ruminative acoustic strums, and overall throughout the two-part set there's still plenty of epic guitar climaxes and joyous synth trills that instantly remind of Reed's own Magenta band. All of these elements together prove to be infectious on multiple repeated listens, and it's hard not to be charmed and won over by this frequently uplifting and joyous piece of music.

While the appearing themes are perhaps not quite as memorable as those found on the first album, and the large increase in constant vocals (especially in the first half) perhaps challenges claims that this is an `instrumental' project, `Sanctuary II' is hardly a poor effort by any means, and one that improves immensely once the instrumental melodies settle in. Certainly those who loved the first album will find plenty to enjoy here, and it's a victory for lovers of varied, colourful and lavish symphonic music with a worldly flavour, another confident work of great inspiration exquisitely delivered by Mr Reed and his musical friends.

If there are any packages left of the special edition of "Sanctuary II" with bonus CD and DVD, that is the edition to go for here. With more than 3 hours of material that is a good deal no matter how you look at it. This is a case of the bonus material being of the same or similar quality as the main album, which probably indicates that Robert Reed is quite the perfectionist. Otherwise, this album in general is one that have Mike Oldfield fans written all over it in terms of a main target audience. Other than that, those who tends to enjoy music where folk music and rock music meet inside a progressive rock general context of the kind that veers towards atmospheric laden and ambient landscapes should find this album to be a rewarding experience.