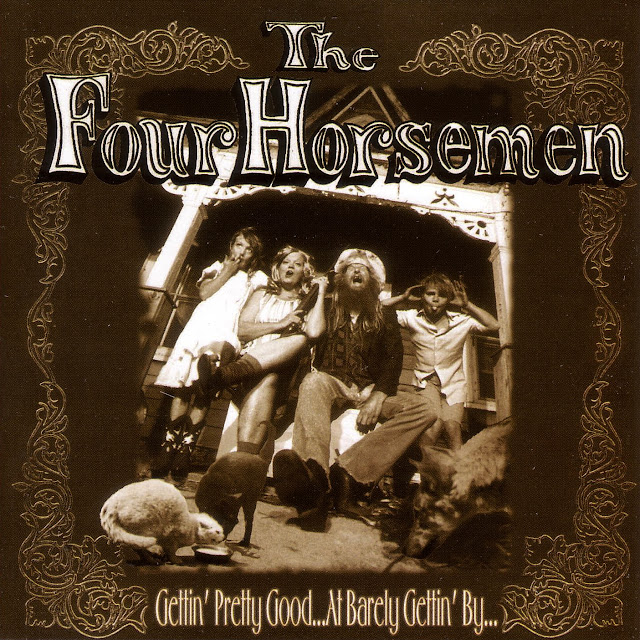 The Four Horsemen were really one band that should need no introduction. It all started with (ironically) five hard-partying guys from Los Angeles who hit the scene with their first full length album in 1991 to huge critical and commercial success. But then life happened. As with most of these bands, grunge came along and buried the whole genre of party rock, taking many bands down with it. Soon after the release of their debut album "Nobody Said It Was Easy", singer Frank C. Starr was re-arrested on drug charges and spent a year in jail as a result. Their record label dropped them and eventually Haggis (guitar) and Ben Pape (bass) got tired of the scene and quit the band. To make matters worse, drummer Ken Dimwit Montgomery died of a drug overdose in September 1994, and a year later, singer Starr was hit by a drunk driver while on his Harley. Starr spent four years in a coma, eventually dying in 1999. Guitarist Dave Lizmi put together a new lineup for the second album "Gettin' Pretty Good At Barely Gettin' By". Frank C. Starr managed to record many of the vocal tracks before his accident, and the addition of Pharaoh on Bass and Randy Cooke playing drums all combined to produce a respectable follow-up to "Nobody Said It Was Easy".

"Gettin' Pretty Good At Barely Gettin' By" was a little more relaxed, and considerably more thought provoking than the first record. The band had clearly matured due to the tragedies which befell it. At the same time, "Gettin' Pretty Good At Barely Gettin' By" was a solid hard rock offering. The Four Horsemen had been called country rock, stoner rock, biker rock, whatever. They knew good time party rock. Several of the songs, including the lead off track "Still Alive and Well", were tributes to either fallen members or the resiliency of the band itself. The title song opened with a dreamy flange guitar, and cutted into a serious groove.  Production was excellent and every instrument came out clean and clear. "Drunk Again" was flat out party rock with a little story to tell about dealing with a breakup. "Livin’ These Blues" was a mid tempo blues rocker with a catchy chorus. "Song For Absent Friends" was exactly what you would expect given the band’s troubles. An acoustic ode to Dimwit, it was personal and no doubt therapeutic for the band. The next track "Keep Your Life" switched immediately away from the prior depressing song and was dare I say a happy song.  Sorta, anyway.

"Hot Rod" linked back to The Four Horsemen’s first album with some crazy guitar work and intensity. That was real driving music. "Rock My Universe" was another solid rocker, with a memorable chorus. From the very first sustained power chord of "Back In Business Again", my absolute favourite track on this excellent album, the listener knows this is going to be an ugly tune. It tells the story of the band and its record company troubles and is a strong song. "Hit the Road" was a hillbilly stomp in good fun, and "Keep On Keepin On" was a road song at its best. The thing about The Four Horsemen is that even going back to "Nobody Said It Was Easy", they could write anthemic, catchy, sing-along tunes. "My Song" is very much like that, as is the final track, "What the Hell Went Wrong". Now full disclosure. The Four Horsemen’s two studio albums were required listening during a long time. When good hard rock was going downhill fast, these were some of my go-to best choices. That said, I don’t think I’m alone. Black Stone Cherry in particular has a harder edge, but I can still hear comparisons over 20 years later.

All in all, The Four Horsemen were quite literally a shattered band come 1996. Five years on from their simplistic but infectious retro-rock debut, they'd been dropped by Def American, been abandoned by their main songwriter guiding force in founding guitarist Haggis, and, most heartbreaking of all, lost drummer Ken Dimwit Montgomery to a drug overdose. As the band's last remaining original members, it came down to guitarist Dave Lizmi and troubled singer Frank C. Starr (more on him later) to assemble a new lineup and attempt to shoulder the load themselves on the snidely named Gettin' Pretty Good at Barely Gettin' By. And they did an OK job. The album still featured much of the Four Horsemen's stripped-down, hard-rocking style, but standout cuts such as "Hot Rod" and the poignant "Song for Absent Friends" generally lacked the Southern Skynyrd flavor, and especially the power boogie AC/DC crunch of old. Instead, the album mostly resorted to a mellower, more soulful, decidedly sleeker Black Crowes-type groove for tracks like the title song and "Drunk Again" (note background lady singers).

A few songs also forced the "we're still rockin''' storyline ad nauseam (see cheesy opener "Still Alive and Well" and the edgier, frankly biographical "Back in Business Again"), while others simply lacked originality (for example, "Livin' These Blues," which apes the debut's hit, "Tired Wings," a tad too closely). Still, the fact that's it's clearly inferior compared to its predecessor shouldn't entirely detract from this album's good-time blue-collar rock & roll, and fans of the Horsemen will likely want to give it a chance anyway. Sadly, Gettin' Pretty Good at Barely Gettin' By proved to be the final musical testament for singer Starr, who passed away under tragic circumstances a few years later. "Gettin' Pretty Good At Barely Gettin' By" is a great biker rock album with many many good moments. Open a bottle of beer and listen to this album.