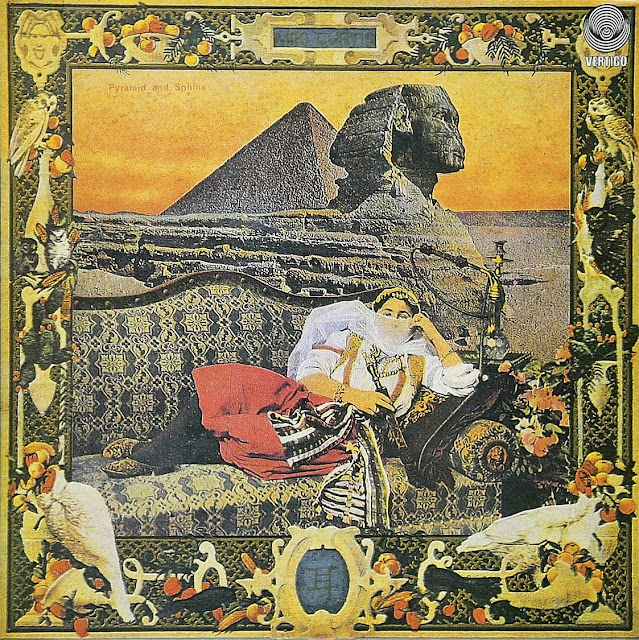 Miki Curtis made his musical debut in 1958. Back then, the twenty year old was a rockabilly singer. This was just the beginning of Miki Curtis’ musical journey. By 1970, Miki was a member of Samurai. They released their debut eponymous album in 1970. It was well received upon its release. Nowadays, "Samurai" is considered a minor classic. However, there was no followup to "Samurai" released. Instead, the band Samurai split-up. For Miki Curtis, another chapter in his career was about to unfold. This was life as a solo artist. Miki Curtis signed to the Vertigo label, and began work on his debut solo album "Mimi The Fast Ear". For his debut album, Miki Curtis collaborated with lyricist Michio Yamagami on nine tracks. The were a potent partnership, who together, penned the majority of "Mimi The Fast Ear". Miki wrote the music and Michio the lyrics. Their collaborations were "Duel Under The Setting Sun", "The Sun Goes Down Again", "The Love of Duke R’s Wife", "Ruined Kingdom", "World Of Mojo", "Golgita The Pirate", "Children On A Hilltop" and "The Wounded Swan and This Measure of Happiness". The lyrics to another track on "Mimi The Fast Ear", "Forty Days On A Stoned Out Camel" came courtesy of John Redfearn and Mike Davis of Samurai. Again, Miki provided the music. With ten tracks written, now it was a case of recording them. So, Miki and his band made the journey to Victor Studio.

Recording of "Mimi The Fast Ear" began in October 1971. Miki had put together some top musicians for what was a hugely ambitious album. Joining the rhythm section were a horn and string section. Then there joined by banks of keyboards and synths, plus a myriad of exotic instruments. Some of the musicians played on most of the tracks. This included Yujin Harada, the drummer from Samurai, Miki’s previous band. Other musicians featured on just a few tracks. All of them however, were playing their part in what was a hugely ambitious and groundbreaking album, "Mimi The Fast Ear". It was produced by Muki and Masaharu Honjo, and completed in January 1972. After recording of "Mimi The Fast Ear" was complete, the album was mixed by Norio Yoshiawa. He had been part of the project since day one, and was responsible for recording "Mimi The Fast Ear". Once Norio had mixed "Mimi The Fast Ear", the release date was scheduled for April 1972. That wasn’t far away. Before that, critics and cultural commentators had their say on "Mimi The Fast Ear". They hailed the album one of the most ambitious and innovative Japanese albums of the early seventies. This genre hopping album was the latest chapter in the Miki Curtis story. The former rockabilly singer had created a career defining album, one that was variously progressive, psychedelic and sometimes, otherworldly. That was all very well, but would the record buying public get "Mimi The Fast Ear" ?

When "Mimi The Fast Ear" was released in April 1972, it didn’t sell in vast quantities. Fans of Samurai were keen to hear what Miki was doing now. Other record buyers were curious when they saw "Mimi The Fast Ear" distinctive ear. Its psychedelic cover offered a myriad of musical mysteries. So, they too tried "Mimi The Fast Ear". Since then, "Mimi The Fast Ear" has become something of a cult album, which I’ll tell you about. Opening "Mimi The Fast Ear" is "Duel Under The Setting Sun". A frenzied strummed guitar is joined by stabs of piano. They’re panned left. Meanwhile, strings are panned right, bells ring out and a trumpet sounds. It’s as if a psychedelic Spaghetti Western is unfolding, and Miki is about to ride out into the desert for a "Duel Under The Setting Sun". As the strings dance and rhythm section provide the heartbeat Miki delivers a dramatic vocal. Later, a quivering guitar cuts through the arrangement. Just like the other instruments, it’s dropped in at the right time. This results in a genre melting, cinematic track where Miki draws inspiration from psychedelia, soundtrack rock and pop. A crystalline guitar creates a mellow introduction to "The Sun Goes Down Again". Meanwhile a bass plays subtle and a piano adds a wistful sound. Miki’s vocal is tender and heartfelt. Nothing is allowed to overpower his vocal. It takes centre-stage as he offers hope, hope for the future. Miki optimistically sings; “if things are tough today, tomorrow will soon be here, on this beautiful track.

The arrangement to "The Love of Duke R’s Wife" quivers, before a horn sounds. This is the signal for Miki’s vocal to enter. He’s accompanied by the rhythm section and piano. Occasionally, a horn interjects as Miki tells the story of a short-lived relationship between Duke Renard’s wife and a young aristocrat. As the arrangement almost waltzes along, the story unfolds. Wistfully, Miki sings of that the young aristocrat: “fell in a battle, dying on a distant field.” He brings the lyrics to life, while an organ and melancholy drive the arrangement to its dramatic and heart wrenching crescendo. "Ruined Kingdom" is very different from the previous track. It has a mellow, feel good sound. That’s down to the choice of instruments. A piano, ARP synths and steel guitar join the rhythm section and acoustic guitar. This seems to inspire Miki, as he delivers one of his most effective and emotive vocals. Against an atmospheric, dreamy and almost otherworldly arrangement he tells the story of the "Ruined Kingdom". Just like the previous track, "World of Mojo" has a spacious track. However, the arrangement is much more understated. Mostly, it’s just  an acoustic guitar that accompanies Miki’s wistful vocal. Later, a flute and then dulcimer interject. Adding a psychedelic twist, is Mojo The Cat, who snores gently. However, mostly, it’s just Miki and the acoustic guitar that play starring roles on this quite beautiful track.

The sound of waves breaking opens "Golgita The Pirate". Soon, the rhythm section, piano, organ and bursts of horns combine. They set the scene for Miki, who sings of the hunt for "Golgita The Pirate". As the ARP synthesizer buzzes, the piano is panned left and the rhythm section right. Later, an organ is panned hard left as the jaunty arrangement takes shape. By then, the hunt for Golgita is in full flight. A battle takes place, and Golgita is shot. There’s a twist in  the tale. When Golgita’s hat is taken off, they discover a beautiful woman, they all prayed and tenderly laid her to rest. So vivid is the imagery, that "Golgita The Pirate" is like a short story put to music. "Children On A Hilltop" sees another change of style. Much of that is down to the choice of instruments. An ARP synthesizer is deployed while the drums, bass and piano play more prominent roles. Similarly, Miki’s impassioned vocal is louder and joyous. It’s as if he’s based the "Children On A Hilltop" on his own childhood, and is happily reminiscing. Wistful and beautiful. That’s the word that springs to mind when one first hears "The Wounded Swan". It’s a slow, string drenched ballad. Just the rhythm section, piano and acoustic guitar accompany Miki. Gradually, the story takes shape of the "The Wounded Swan" that’s shot and left behind. It’s unable to make the journey back to its birthplace. So effective is Miki’s delivery of the lyrics, that "The Wounded Swan" takes on a cinematic quality. One can imagine "The Wounded Swan" watching as its friends vanish into the distance.

From the opening bars of "This Measure of Happiness", it’s apparent that something special is unfolding. With just a piano and the rhythm section for company Miki delivers a truly heartfelt vocal. He seems to have reserved his best vocal for this beautiful paean. The cosmic sounding "Forty Days On A Stoned-Out Camel" closes "Mimi The Fast Ear". For many people this experimental fusion of psychedelia, avant-garde, experimental and free jazz is the high point of "Mimi The Fast Ear". It’s certainly unlike the rest of the album. A droning, spacey sound sits above the arrangement. Meanwhile, the rhythm section play slowly. Miki’s vocal is deliberate and dramatic. So are the harmonies. When they drop out a blistering guitar solo replaces it. Along with the droning, otherworldly sound, they take centre-stage. Then the rest of the band set the scene for Miki and the harmonies. When they drop out the final forty seconds feature a myriad of bubbling, gurgling sounds. This ensures that "Mimi The Fast Ear" ends on a surreal, psychedelic and progressive high.

All these years after the the original release of "Mimi The Fast Ear", Miki Curtis’ debut album is now a cult classic. It’s much more appreciated than it was in April 1972. Back then, this genre-defying album passed most people by. Many of the people that heard "Mimi The Fast Ear", didn’t know what to make of it. Partly, that was because its such a varied, and eclectic album. Miki Curtis flits between genres on "Mimi The Fast Ear". There’s everything from sixties pop, psychedelia, progressive rock,  jazz and rock, to elements of avant garde, experimental, free jazz. The use of synths, especially the ARP show that Miki Curtis was an innovator. He brought musicians onboard who were pioneers, and knew what instruments like the ARP were capable of. They created a myriad of disparate sound, including some that can only be described as otherworldly. It seemed that Miki Curtis was determined to challenge musical norms. Other times, he seemed quite conservative. That’s the case on "Mimi The Fast Ear" ballads. Mostly, Miki is accompanied by an understated and traditional arrangements. This allows him to breath life, meaning and emotion into Michio Yamagami’s lyrics. Ballads like "The Sun Goes Down Again", "Wounded Swan" and "This Measure Of Happiness" are among "Mimi The Fast Ear" highlights. Then on other tracks, Miki lets his imagination run riot.

None more so than "Forty Days On A Stoned-Out Camel". It must have sounded truly innovative when "Mimi The Fast Ear" was released in 1972. With its myriad of otherworldly sounds, it’s still a captivating track. So, is Ruined Kingdom, with its lysergic sheen. Then there’s the cinematic sounding "Duel Under The Sun" and "Golgita The Pirate". Both are rich in imagery, and transport the listener to another time and place. This is just another reason why "Mimi The Fast Ear" is a cult classic. That’s despite the unorthodox use of panning. Listen carefully to "Mimi The Fast Ear", and the listener will hear that instruments are arranged very differently to most albums. On one track the drums were panned to the right. Usually, the drums take centre-stage. Then on other tracks, the use of panning results in what’s almost an unbalanced sounding arrangement. It takes a bit of getting used to, but adds to "Mimi The Fast Ear" inherent charm. The occasional unbalance mix can be forgiven. Especially, since in 1972, the technology available wasn’t as advanced as it is today.  This meant that recording an album as ambitious and innovative as "Mimi The Fast Ear" was quite an undertaking. Somehow,  recordist and mixer Norio Yoshiawa, plus producers  Miki and Masaharu Honjo managed to do so. They, and everyone involved with Miki Curtis’ genre-hopping debut album "Mimi The Fast Ear" should be proud of an album that’s variously ambitious, innovative, progressive, psychedelic and often, beautiful. That’s why "Mimi The Fast Ear", this cult classic, is finally being appreciated.