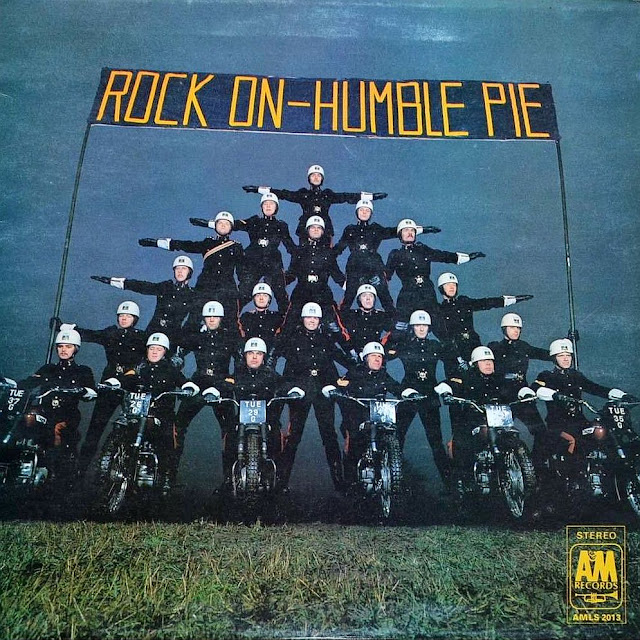 "Rock On" was the fourth album by Humble Pie, released in 1971. It reached #118 on the Billboard 200. It was the last Humble Pie studio album to feature guitarist and vocalist Peter Frampton, who embarked on a successful solo career. "Rock On" saw Humble Pie establishing the heavy blues rock sound they became famous for, led in no small part by their new manager, Dee Anthony, after the collapse of Andrew Loog Oldham's Immediate Records. But this was not where Frampton wanted to be and within a year he had quit the group to pursue his solo career and take his music in a more acoustic direction. Most of the songs on "Rock On" were performed live on tour before being recorded for the album. Steve Marriott turned the production into a studio party of sorts, featuring numerous guest performers from the world of blues and soul. Distinguished performers such as PP Arnold, who Marriott knew very well from his Small Faces days, Doris Troy who had a US hit in the early 1960s with her own self-composed song "Just One Look" (later covered by The Hollies), and Claudia Lennear (who had sung backing for artists such as Joe Cocker, Freddie King and Gene Clark), were featured on this album.

The album features the classic rock song "Stone Cold Fever" written by band members Marriott, Ridley, Frampton and Shirley. Steve Marriott's ballad "A Song For Jenny" (written for first wife Jenny Rylance) features The Soul Sisters (Doris Troy, P.P. Arnold and Claudia Lennear) on backing vocals. B.J. Cole contributes pedal steel guitar. "Strange Days" is a ballsy blues rock song, in which Marriott's powerful vocals soar as close to a live performance as any on this album. The vocals have a delayed echo, sounding grounded yet "out there"; and Frampton's guitar solos weave throughout. It is also the longest song on the album. "Sour Grain" was a joint composition by Peter Frampton and Steve Marriott, keeping the same tempo as "Shine On", but with just Marriott on vocals. Everybody agrees that "Rock On" is one of Humble Pie's best albums, if not the best one. On this album the band really proves why in the early Seventies it was considered one of Britain's greatest Rhythm & Blues outfits. They are becoming thoroughly Americanized by this time, much more so than their principal concurrents, The Faces: Country, Blues and Bluegrass influences are all over this album, but Steve Marriott adds to everything his impeccable vocal stylizations, really bothering to sing and, okay, maybe 'articulate' instead of just barking and shouting his way through all the songs. And the band shows itself a tight and compact unit; not as tight as the Stones, but I don't blame them for that. I mean, none of the songs ever really fall apart or degenerate into noisy bummers; Shirley's drumming is tight enough to prevent them from doing that, but loose enough to give the band some opportunities for improvised jamming. Meanwhile, Marriott tosses out crunchy, awesome riffs, Frampton blasts the house to pieces with magnificent leads, and occasional guests, like Bobby Keyes on sax, provide great embellishments as well.

The heavy tracks should be played really loud in order to feel their power, especially the monstruous jam "Stone Cold Fever" - a track after listening to which I hardly understand the need for Aerosmith's existence on the planet. Marriott howls out the paleolithic lyrics like a prime caveman while beating the shit out of his guitar, Frampton gives out an impressive impersonation of Santana, and the track ends with a little guitar heaven as both play that generic, but unbeatable riff in unison. There's also a terrific cover of Howlin' Wolf's "Rollin' Stone", heavily recommended for all heavy lovers of heavy blues; Steve's singing on that one is magnificent, a prime example of 'putting the soul and spirit into the blues', and Frampton really intrigues me with his playing on that one. The solo part is awesome once you listen to it in headphones; Wilson & Alroy were right in comparing Frampton with Page on that one - he plays the same barrages of echoey, flashing licks that distinguish Page's work on Led Zep's best album (the first one), and that's a fantastic listening experience.

However, the album is diverse enough, and it's not just the heaviest numbers that make the grade. Many subgenres of roots-rock are tackled in many interesting ways, some of which are quite unique. Okay, maybe "A Song For Jenny" isn't too unique, but you can't get away from the fact that the main acoustic melody of it is just as memorable as it is gorgeous, which is only proved for the fact that McCartney later nicked that same acoustic riff for his pretty ballad "Mama's Little Girl" - be it intentionally or subconsciously, it really doesn't matter. But what about "79th And Sunset" ? I love that song, and, shame on me, I even like the misogynistic lyrics. They rank among the most interesting misogynistic lyrics I've ever witnessed, by the way. How about this: 'Well this yellow haired snake sits snug as a bug/Got more angle than a toby jug/Star lock hair pins, honey has faults/Shows her legs when opportunity knocks/Underneath her red sweater/She's a big-deal go-getter/There'll be some dramas inside your pajamas tonight'. And I could go on, too, but I won't, because I'm not here to give away the lyrics. Instead, I'll just say that the saloon piano is tremendously tasty, Marriott's tongue-in cheek intonations are hilarious, and the doo-woppy backing vocals and Frampton's simplistic, but enthralling licks are absolutely endearing.

Frampton's main highlight on the record, a Bo Diddley stylization entitled "The Light", is quite catchy as well; bassist Greg Ridley breaks in with an overtly stupid country rocker ("Big George"), highlighted by its own stupidity and Bobby Keyes' beautiful sax solo. And the magnum opus of the record is a really strange number appropriately called "Strange Days" which begins its life as a piano-guitar fast jam before turning into an eerie chant about an FBI employee - three years before Mick Jagger took the theme and perfected it on "Fingerprint File". Again, Steve is the main hero, turning this into a real theatrical performance: his singing ranges from a shaky, trembly murmur to all-out screaming, and the song can get really scary at times. I'm sure the record will keep on growing on me yet, like most prime Rhythm & Blues recordings do. There's probably nothing particularly great about it if one just disassembles it to individual pieces, but when all the elements of the band's 1971 style are taken together, this makes up for some truly great Rhythm & Blues and a style you certainly couldn't find anywhere else. Like I said, this is the vibe that Aerosmith were probably feeding on in the beginning of their career - they just made everything a wee bit heavier and faster and swapped the funny and interesting lyrics for idiotic ones. If you're a big Stones or Faces fan, try it, you'll like it.