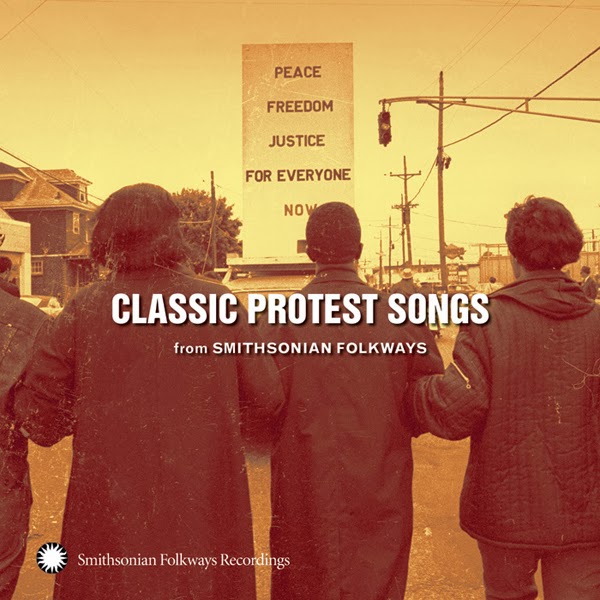 War, social injustice, personal plaints, and calls for action have long fueled musical creation and performance. In Classic Protest Songs, Mark Gustafson and Jeff Place tapped the historic Smithsonian audio collections to compile 22 songs favored by leaders of antiwar, civil rights, industrial labor, farm worker, and other struggles to air their grievances. Woody Guthrie, Lead Belly, Janis Ian, Big Bill Broonzy, Pete Seeger, Barbara Dane, Guy Carawan, Phil Ochs, and other marquee artists let their voices ring out with calls for peace and justice.
From the booklet: "Over the years, Folkways Records (now Smithsonian Folkways) has produced and distributed high-quality recordings of American folk music. Moses Asch, founder of Folkways, made a commitment to artists that their Folkways recordings would never go out of print. The Smithsonian keeps that tradition alive. This recording is intended as an introduction to many of these recordings, a chance for listeners to experience them, perhaps again, perhaps for the first time. The Smithsonian has subsequently acquired other fine small labels, and this disc includes recordings from the Monitor and Paredon labels. The songs presented here come mainly from the 1940s to the 1960s.

Many people mistakenly believe that "protest songs" originated with guitar-playing folk singers in the 1960s. It is highly likely that some form of protest lyrics have existed as far back as humans have made music. Songs have been associated with almost every human conflict in history. In the British Isles, ballads about the latest current events and issues were printed on pages of paper and sold for a few pennies, and these publications were called broadsides. Many songs and rhymes we all know well began as topical or protest songs, their original meaning now lost. "Froggy Went-a Courtin’" has been traced back to the 16th century and discusses a royal romance. "Little Jack Horner" is about a disreputable tax collector in the days of Henry VIII. In the United States, many complaints of the American colonists about the British were accompanied by associated songs. Since the invention of audio recording, many songs of protest have been recorded. Many of the early country and blues recording artists worked as sharecroppers or in factories. Support for labor struggles and feelings of anger were put into words and performed. There are songs of the sharecroppers, songs of the textile workers, songs of the railroad workers, songs of the miners—and the list goes on. Collections of these songs have been published, and many of these old 78s have been reissued on compact discs.

The 1930s found a group of academics, composers, journalists, and musicians in New York at the beginning of the great "folksong revival." These individuals came from the far left politically and championed the folklore and music of the people. Among this musical world were great popular songwriters, such as Earl Robinson, Yip Harburg ("Somewhere over the Rainbow," "Brother, Can You Spare a Dime"), and Lewis Allan (see track 12), and their lyrics frequently dealt with social issues. It was out of this environment that Folkways Records emerged. Some artists active in New York in the early 1940s were Woody Guthrie, Pete Seeger, Josh White, and Lead Belly. In this environment, through Asch and then later Disc Records, they expressed themselves politically, and Moses Asch always felt that his records were a vehicle for his artists to speak. One of the great singing groups of the time was the Almanac Singers (Pete Seeger, Woody Guthrie, Bess and Butch Hawes, Sis Cunningham, Millard Lampell, Lee Hays, and others), whose repertory consisted of songs for the common people´s struggle.

Asch’s studio always involved a racially mixed group of musicians, and some of the black musicians present found it safe to express themselves openly in their lyrics in ways they could not in their places of origin. An integral part of the civil-rights movement was its use of song. As long as Africans had been in the United States, they have used song to communicate their response to their situation. When white owners banned drums because they felt the slaves might be able to communicate with each other by drumming, the slaves adopted Christian hymns, such as "Oh let my people go!" in which the images of imprisoned Jews became metaphors for their condition. The song "Follow the Drinking Gourd" was a veiled reference to the North Star and the path northward, to freedom. Worksongs and shouts included commentaries on bosses and owners. Country bluesmen included references in their songs to the problems they had living in the South. Charley Patton sang of the evil sheriff Tom Rushen. The civil-rights movement adapted a body of black traditional music and hymns to new uses (Bernice Reagon, notes to SFW 40084).

In the late 1950s, the folksong revival reached its apex. Folksongs became the most popular music in the United States until the great "British Invasion" of 1964 brought rock and roll back to the top. Students across the country took up guitars and banjos. Many of them built their careers on the work of the folksingers that had proceeded them, important figures such as Guthrie and Seeger. As the politically repressive times of the McCarthy years waned, the political left felt that it could express itself again, and many of these statements took the form of folksongs. Sis Cunningham and Gordon Friesen started Broadside magazine in 1962 to publish newly created "songs of conscience." Broadside was the first magazine that published songs by Janis Ian, Bob Dylan, Tom Paxton, Phil Ochs, Eric Andersen, and others. The appearance of Bob Dylan on the music scene changed the musical approach of almost every current musician; many started writing and trying to sound like him, even though he had based his own persona on Guthrie. It’s the image of Dylan with a harmonica rack and a guitar that became the caricature of the "protest folksinger." As quickly as he had arrived, he moved on to other musical endeavors. Besides Broadside were individuals who published and supported topical music. The great bible of the folksong movement, Sing Out! magazine, published new and old protest songs (and still does). Former Sing Out! editor Irwin Silber and his wife, activist and singer Barbara Dane, opened Paredon Records in New York in 1970 to document the music of social political movements worldwide.

African-American folksinger Jimmy Collier pointed out that if you want to get your message across, it’s best to use the music of the community that you wish to communicate with. Collier found that the urban black community did not respond to new words to American folksongs, but it did respond to new words to rhythm-and-blues songs (personal communication, 2000). As the folk revival ended, hard-edged new songs began to be written using folk-rock and rock music. Punk rock exploded on the scene in the late 70s with the Sex Pistols and their attacks on Margaret Thatcher’s administration with "God save the queen and her fascist regime." Protest lyrics are easily found in rap and hiphop. The early 21st-century war in Iraq has led to a new round of antiwar songs. Much as Broadside and Paredon Records became an outlet for writers of political song, national networks of such writers still exist; there are newsletters, websites, house concerts, and self-produced cassettes. Seattle resident Jim Page is an example of this: he plays on the street and produces recordings that illustrate his feelings. Billy Bragg adapted Lead Belly’s "Bourgeois Blues" into "Bush War Blues" and distributed it through the internet.

In 1987, Ralph Rinzler, folk musician, record producer, and talent scout for the Newport Folk Festival, and then Assistant Secretary for Public Service at the Smithsonian Institution, negotiated the donation of the Folkways label to the museum; the following year, the Smithsonian Folkways record label was founded. Rinzler had been involved in earlier Folkways albums, and he knew the value of the collection. Smithsonian Folkways has always set out to reissue material from its archives with expanded liner notes and updated sound. It has since acquired other smaller, like-minded record companies: Cook, Paredon, Dyer-Bennet, Fast Folk Musical Magazine, Monitor, Collector, and M.O.R.E. These labels comprise what is called the Smithsonian Folkways Collection, and they include folk recordings in their catalog. More than three thousand titles are available through Smithsonian Folkways via on-demand compact disc and on-line digital download. This recording hardly breaks the surface of the repertory of songs that are out there. Some "classic" protest songs are not on this disc because this collection draws exclusively, as do all of the releases in this series, from the body of material in the Smithsonian Folkways Collection. This collection is meant to be a series of doors to lead listeners into full recordings by these artists. If you enjoy it, many more great recordings are out there".