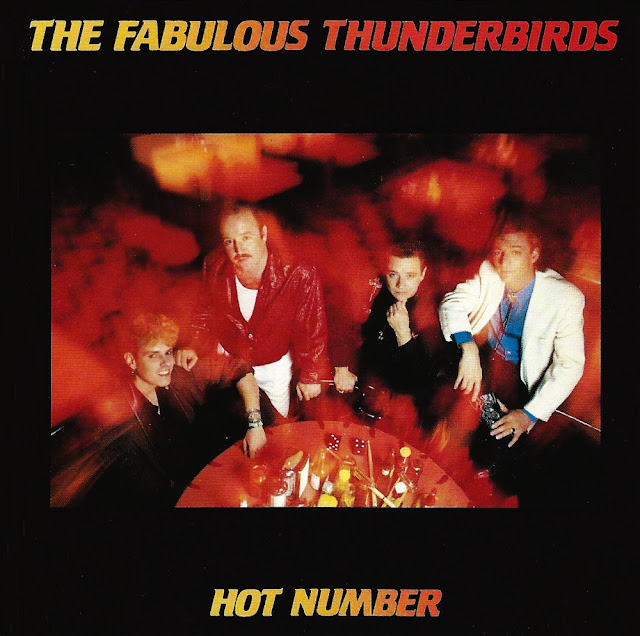 After performing for several years in the Austin, Texas, blues scene, The Fabulous Thunderbirds won a recording contract with Takoma Chrysalis Records and later signed with Epic Records. In 2011, they signed with Severn Records. Their first two albums were released in 1979 and 1980, with Kim Wilson's lead vocals and harp, Jimmie Vaughan as lead guitarist, and Keith Ferguson on bass guitar. Mike Buck was on drums for the first album but left the band and was replaced by Fran Christina on the second. Both albums initially sold through the small number printed (about 3000 units) and are now regarded as significant blues recordings. The Thunderbirds' blues style mixed Texas blues with the harmonica-laced swamp blues sounds of Slim Harpo and Lazy Lester - both of whom the Thunderbirds covered. The band's third album, Butt-Rockin', released in 1981, took the band closer to old rhythm and blues and added additional musicians playing piano and brass.

Although The Fabulous Thunderbirds had become favorites of fellow musicians - opening shows for the likes of the Rolling Stones and Eric Clapton - and had been critically well-received, the band's records did not sell well. Chrysalis dropped the band following the release of the album "T-Bird Rhythm", leaving the band without a contract for four years. While still in limbo, The Fabulous Thunderbirds continued to play concerts across the U.S. During this time, bassist Keith Ferguson left the band and was replaced by Preston Hubbard, a former member of Roomful of Blues. Also during this time, the band was heavily featured on the 1983 Carlos Santana Album "Havana Moon". In 1985, the band finally landed another recording contract with Epic/Associated. The single "Tuff Enuff" was featured in the 1986 film Gung Ho. It was also featured in the film Tough Guys, as was the follow-up single, "Wrap It Up", which went to number 50 on the Billboard Hot 100 chart. "Tuff Enuff" remains the band's only Top 40 hit, peaking at number 10 on the Billboard Hot 100. The album "Tuff Enuff" went gold in several countries and was subsequently certified platinum in the United States, with sales of over 1 million. The band's music was also used in the 1987 movie Hot Pursuit. The Vaughan–Wilson composition "Twist It Off" appears in the 1987 Michael J Fox and Joan Jett film Light of Day and on the issued soundtrack.

The Fabulous Thunderbirds' next album, "Hot Number", fell off the charts quickly. Jimmie Vaughan has said that he didn't like playing on this album because the band used a horn section. Jimmie's rhythm playing had always been the anchor of the band, and though he may have had to sublimate his ego here, allowing the horns to take the spotlight on some songs (he barely plays at all on "Streets of Gold"), he is still very much in his element. It seems his frustration has carried over into his playing, with great results. His guitar tone is clean, hot and sounds downright angry in most places. This creates a great contrast to the mellowing uptown horns, organ and piano parts on many songs. Listen to "How Do you Spell Love", a re-recording of the same song from "T-Bird Rhythm". His rhythm part is simple, but the combination of heavy amp tremolo and his biting lead tone make the song snarl with conviction and maybe more than a little frustration. It sounds as if he's trying to take over the band with his sound.

It's the same on "Hot number", one of my favorite T-Bird songs, where the lead fits the lyrics to a T. There are some obvious carryovers from "Tuff Enuff". "It Comes To Me Naturally" is an example about a guy who can't control himself in any bar full of women, with a typical stripped down and supercharged Jimmy Reed style rhythm part from Vaughan. Jimmie's use of a long scale guitar, a habit I think he picked up from Dave Edmunds (what's Jimmie doing picking up habits from a Brit anyway ?), is used sparely but effectively, as in "Don't Bother Tryin' to Steal Her Love". "Stand Back" is an excellent example of the tension between guitar and horns that pervades this record, and it's perfect as the first song. "Love in Common" is a great song about a relationship between a down home Southern guy and his uptown northerner girlfriend. "Wasted Tears" is a melancholy song about a broken up relationship with soulfull horn and organ parts and a 1950's sounding tearjerker guitar part. It's great that Jimmy and the guys didn't waste any tears when they made this album. Kim wilson plays harp and sings with perfection. All in all this record has a more uptown, mainstream rhythm and blues feel than other T-Bird albums, but that doesn't take away from the T-Bird sound, it adds to it, and it's good, it's good.

Following the album "Hot Number", their recording of "Powerful Stuff" was a success, based in part on its inclusion in the 1988 film Cocktail. The band then embarked on a long series of lineup changes and albums throughout the 1990s. Long-time drummer Fran Christina left in 1996 and went on to join with Marcia Ball and later Doug Sahm's "Last Real Texas Blues Band". Jimmie Vaughan left the band to play in a duo with his brother Stevie Ray Vaughan; following Stevie Ray's death in 1990, Jimmie pursued a full-time solo career. The Fabulous Thunderbirds replaced Vaughan with two guitarists, Duke Robillard and Kid Bangham. Doug "Kid" Bangham left the band after three years to pursue a solo career and open the Carver School of Music and the Carver Institute of Rock in Carver, Massachusetts. In the early 1990s, Kim Wilson recorded a pair of solo albums while continuing to tour with The Fabulous Thunderbirds. In 1994, the band recorded its ninth album, "Roll Of The Dice", which was released on Private Music in 1995. "High Water" followed in 1997, although this was actually a collaboration between Wilson and studio musicians Steve Jordan and Danny Kortchmar issued under the Fabulous Thunderbirds name. Former bassist Keith Ferguson died of liver failure on April 29, 1997, at the age of 50.

On the evening of February 16, 2000, The Fabulous Thunderbirds were the first band ever to be broadcast on the Internet using high-definition cameras. The companion DVD, Invitation Only, is one of the first high-resolution multi-track recordings of a live concert event. The companion CD "Live!" was released in 2001. The band recorded "Painted On" in 2005, produced by Steve Berlin (of Los Lobos) and featuring Rachel Nagy of the Detroit Cobras on the track "Love Speaks Louder Than Words". Guitarist Nick Curran joined Wilson on vocals for "Two Time Fool". Bassist Ronnie James and guitarist Troy Gonyea toured with Booker T. Jones in England in 2009, with the addition of guitar player Marc Ford from the Black Crowes and Darian Gray on drums. The band released the album "On The Verge" in 2013. In 2016, Kim Wilson announced that The Fabulous Thunderbirds for 2016 will be Steve Gomes on bass, Kevin Anker on keyboards, Wes Watkins on drums, with holdover Johnny Moeller on guitar. This lineup plus drummer Rob Stupka recorded the album "Strong Like That" released in August 2016. Former bassist Preston Hubbard (born on March 15, 1953 in Providence, Rhode Island) was found dead at his home in St. Louis, Missouri, on August 17, 2016, at the age of 63.