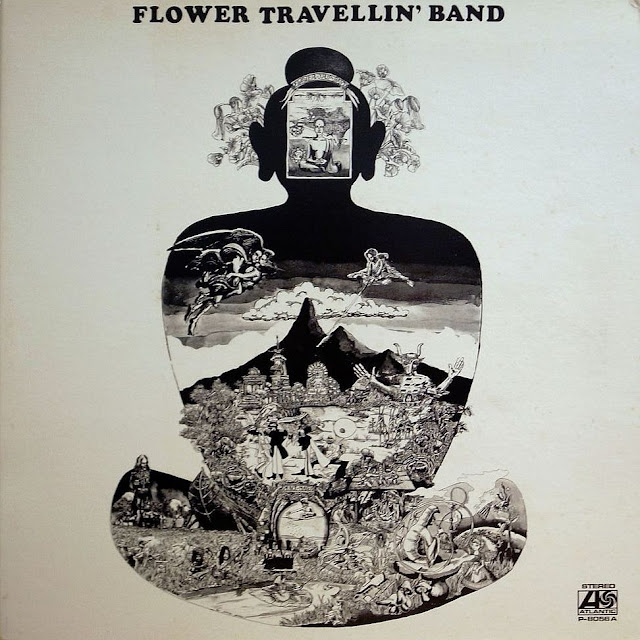 "Satori" is an album I heard a lot about, and its cultural and musical significance is obvious. I first picked this one up a few years ago, but at the time, found myself scratching my head as to what made it so great. The music was very unusua, raw and unpolished; not the type of Space-Rock I was used to hearing out of the UK around the same time. However, after owning it for a little while now, I finally see the appeal. This is very strong, heavy and forward-thinking music. Even if it doesn't sound like it at first, you must remind yourself that this album came out in an era that had yet to really hear a lot of the stuff done on this album. Sure, there already were plenty of psychedelic Rock works out by 1971, thanks in no small part to acts such as The Beatles, Pink Floyd, The Moody Blues and Frank Zappa, among others. However, the rough, hard-edged atmosphere heard on this record was something that in my opinion wouldn't become the norm for another couple of decades. In that sense, Satori is very ahead of its time, and I wouldn't be surprised if it served as an inspiration for many heavy/psychedelic rock acts that came after it.

Flower Travellin' Band take many influences on themselves, here, such as Black Sabbath and Led Zeppelin, but there is still plenty of originality and 'music of the future' type moments on the record that it makes it very much worthwhile, in my view. It may take some time to get into the swing of things, especially if you're not expecting it, but it's worth it once you allow yourself to appreciate this work on its own merits. It just happens to be really damn good, as well. It's very dark and full of doom, so I don't recommend listening to it when having a bad day, but the darkness is merely a result of the heavy psych-rock the band emits throughout. The cover art is beautiful, but don't let that fool you; the music held within is, more often than not, rather dreary. The piece is comprised of five parts, all bearing the name of the album itself. Each movement is a little different, and makes for some good variety. Some tracks are better than others, but no track is completely weak or lacking. There is plenty of substance, here.

''Part I'' starts off with a brief sound of dead airwaves beeping, then some light cymbal crashing from Wada. Then, silence. Suddenly, one of the most unsettling musical moments of my life breaks in: ''Gaaaaaahhhhhhhhh!!!!!!!'' ''Du na da na, du na da na, du na da na, du na da na!'' go the guitars, and then Yamanaka begins to sing proper, but not before throwing in some more wailing for good measure. His Japanese accent is obvious when singing the English lyrics, but it never gets all that bothersome, and at least you can understand him, unlike the earlier Eloy works. This song simply goes through the same motions a couple of more times before suddenly ending. It's an okay track, but not as good as what will follow.

''Part II'' is already off at a better start, with a very catchy drum beat and some heavy rocking rhythm guitar accompanying it every now and then. The lead guitar parts during this first part are pretty interesting as well, but it isn't until around a minute forty that they really shine. Some really awesome fade-in-fade-out volume swell effects are performed while holding a solid, crunching guitar chord. It very much gives the song's atmosphere a sense of psychedelic dread, which I'm sure is what these guys were going for. For a little while, the drums are allowed to break free, playing that contagious beat on their own, unaccompanied, until around 4:02, when the volume swell guitar effects come in again, this time even more melodic and effective. I swear, my mind jumps to more modern trippy rock bands like Tool when I hear these moments; and this was back in 1971! truly music that was ahead of it's time. Anyway, the lead guitar parts continue in the left channel, while the psychedelic guitar effects continue in the right, now encased in a good dose of reverb, adding that trippy effect even more. This goes on for awhile very successfully until 6:48, when everything seamlessly and effortlessly snaps back into the main riff. That's when the song ends. It's a brilliant piece of psychedelic rock music.

''Part III'' has a much more subtle beginning than any of the previous tracks, with distant sounds of what sound like either thunder cracks or explosions. Either way, this is soon followed by a dread-laden bass line that carries the listener into the darkness. 1:25 sees the first full-fledged guitar riffing of the track, and it's the most Sabbath-esque tune heard yet on Satori. This continues on for much too long without really changing, and it's probably one of the least-pleasant moments on the record for me. Finally, after what feels like an eternity, a little over five minutes into the song, things finally switch up, and it gets interesting. For the next twenty or so seconds, an amazing musical breakdown makes way for the excellent guitar solo soon to follow. Once it hits, there is no stopping it. It's not super fast or technical, yet it always makes me groove whenever I hear it. Here, Hideki Ishima really shows what he is capable of conveying through his instrument; intense, heavy psych-rock. Around seven minutes and eighteen seconds in, things come to a crashing halt, and the dark, spacey soundscapes begin. This band does an awful lot with so little, as most of these trippy musical moments are handled simply through the unusual way they choose to play their instruments; as mentioned before, this album is a very bare-bones type of recording, Not much post-production seems to be at work here, and anything you hear that sounds particularly unusual was most likely produced live in the studio (except for the moments in which Ishima had to double track over himself, due to the lack of a second guitarist, of course). Recapitulating my least-favorite guitar riff (but not for too long), the band then goes into one final, frantic blast, before ending the song on avery strong note.

''Part IV'' has the best opening off all these tracks, and start out very clean and bluesy before switching into the distorted, raw riffing that they do so well. This time, it's all very well-contained and doesn't go on for too long. About a minute and a half in, Yamanaka starts spiting out the lyrics in an almost spoken word style that reminds me a lot of Jimi Hendrix's vocal style. Wether or not this was intentional or not, I don't know, but it works. One of the groovier, more enjoyable parts of the album for me. Again, musically, these guys sound ahead of their time. Every once and awhile, between the vocalized verses, the guitar comes in with a very heavy vibe that I swear to god puts me in kind of the thrashier Metallica days. Again, not in terms of speed or technicality, but in terms of attitude and approach. This band sounded like bands that didn't even exist yet at the time, and to me that is worth noting, because it's more than a little impressive. A very Prog-Metal type of odd rhythms come in, then suddenly everything becomes incredibly smooth and groovy. This is my favorite musical moment on Satori, and it hits around 3:57 of this track. Harmonica, aye? Absolutely, and it works incredibly well here, up against the stomping, chugging rhythms produced by the bass, drums and electric guitar. it's absolutely brilliant. Hey, guess what? We're only halfway finished with this song!

5:41 marks another fantastic guitar solo from Ishima, and he's completely on top of his game, here. Wada is no slouch, either; his tight, rhythmic backbeat helps keep all of this intense rocking in check, and while not overly frilly, the man's drumming ability certainly can't be ignored. This section of the song goes on for quite a long time, but never gets boring, unlike previous overly- long moment on the record, and then everything else breaks away except for drums and harmonica. Soon, the other instruments begin to re-introduce themselves one by one, this time accompanying the main riff that the harmonica is providing. Finally, around 8:46, things come back around to that initial riff, and Yamanaka does his thing once again. These guys are great at bringing their musical journeys back around to where they began, thus giving each song on Satori a very symmetrical feel. It means that the album never wanders too far away from itself, and all the music enclosed stays concise. One final blast of energy bring this rocking track to a resounding close. The drumroll at the end is especially tasty.

''Part V'' is the last song, and starts off more intense and complex than any of the others that came before it. Sudden start-stops, and a very Ozzy-like vocal howl comes very shortly into the game, and the clean guitar arpeggio picking heard off in the distance backing this up is enough to send shivers down your spine. This is probably the darkest song, and you can definitely hear the Black Sabbath influence here quite a bit. But it doesn't mean this song is completely unoriginal; it just means it may sound more familiar to you than the other tracks. The long-held breaths from Yamanaka are clearly meant to simulate fear, pain, dread, etc. It works, but it may not me as pleasing to your ears as other, more musical moments on the record. Jun Kosugi's bass is the most notable here, and it backs up Ishima as he plays quite possibly his most emotional guitar solo. Overall a very good track, full or darkness and while the Sabbath similarites will be obvious to you, think of a more modern act that has managed to pull this type of dark, beautiful stuff off quite well. Opeth is what comes to me. Fair comparison? Well, perhaps you will feel differently about it, but I wouldn't be surprised if this album didn't influence Mikael Akerfeldt at one point or another. After all, it's highly regarded among many doom-rock followers, and I'm sure the man heard it sometime in his life. This track (and album) finally ends on a very spine-chilling note, with a final soft chord being played, followed by the distant crash of a gong. That ends the magnificent journey that is Flower Travellin' Band's Satori.

Now the question is, should you buy it for yourself ? I think so. I think, even if it doesn't become a favorite of yours, you'll be glad that you own it if not for the simple fact that it holds so much relevance and importance among many serious music fans. It's still a fairly underground work, as well, which gives it a certain stigma, and I think all of those factors (including the music itself, of course) combine to make a very good case for owning this one. Expect the unexpected, and cherish the darkest moments, and you'll love Satori. What you mustn't do, however, is hold the album to some insanely high expectation. It's old, rough around the edges, yet at the same time, very much worth listening to.