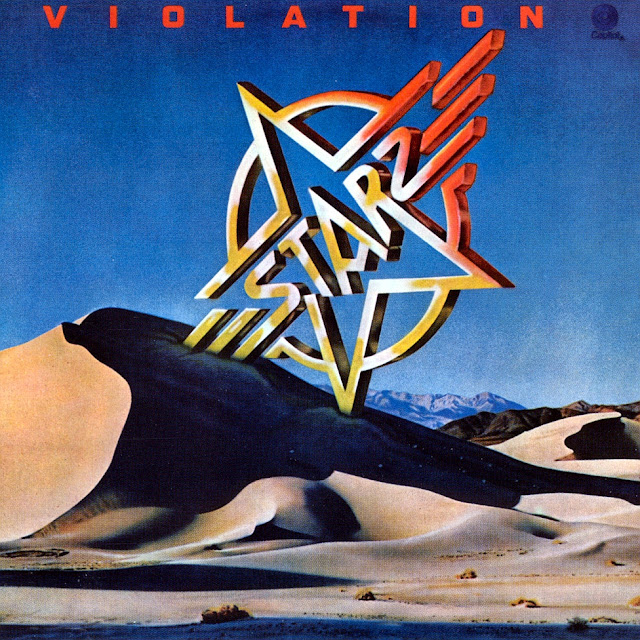 They had it all: Songs that managed to be both rocking yet melodic (think a merger of Cheap Trick, Aerosmith, and Kiss), a hunk of a frontman, a pyro-heavy stage show the featured lots of shooting sparks, the same management as Kiss, but for whatever reason, Starz just didn't hit the big time. The group's roots can be traced back to the early-'70s pop band Looking Glass, which scored a number one hit single, "Brandy (You're a Fine Girl)" in 1972. And it was Looking Glass' rhythm section that would be transplanted to Starz: bassist Peter Sweval and drummer Jeff Grob (who went under the colorful name Joe. X. Dube upon becoming a member of Starz), who were joined by guitarists Richie Ranno and Brendan Harkin, as well as singer Michael Lee Smith (brother of '70s teen heartthrob Rex Smith). Signed to Capitol Records, the label issued the self-titled debut from Starz in 1976, followed by "Violation" in 1977, "Attention Shoppers!" in 1978, and "Coliseum Rock" in 1979. Along the way, the group issued their share of arena-worthy anthems ("Detroit Girls," "Violation"), had some close calls with songs that should have been hit singles ("Cherry Baby," "Sing It, Shout It"), opened for the era's biggest bands (Bob Seger, Ted Nugent, Rush), and Ranno even guested on Gene Simmons' 1978 solo album. But Starz just didn't translate to the masses, and by 1980, they were kaput.

In the wake of their split, the group retained a sizable cult following, as quite a few hair metal acts later in the decade were quite vocal about their Starz fandom (Poison, Cinderella, Bon Jovi). A steady stream of releases from the vault appeared, especially after the launch of the official Starz website, including a live set recorded in 1978 that has been reissued several times over the years, "Live in Louisville", which offers proof that Starz could easily stand alongside the era's big boys of rock (despite including some of the most ridiculous stage raps you'll ever hear on a live recording). The early 21st century saw all of the group's studio albums remastered and reissued via Rykodisc, which resulted in Starz reuniting for live shows, something they've sporadically done ever since. Starz' sophomore album, "Violation", was quite similar to its predecessor. Jack Douglas was still the band's producer, and Starz continued to favor the type of slick, commercial hard rock that would be called pop-metal in the '80s and early '90s. This 1977 LP didn't establish Starz as major players in the pop-metal field; the New Yorkers did have a small following, although not a huge one. Nonetheless, this is an enjoyable record. Tracks like "Cherry Baby" and "Rock Six Times" are certainly decent. Most of the time, Starz vocalist Michael Lee Smith sings about the same things that Kiss and Sweet were singing about in the '70s; namely, all-night parties and wild young women in tight dresses. Starz's lyrics, as a rule, were meant to be fun, not profound, and while Violation didn't go down in history as one of pop-metal's all-time classics, it's worth hearing if you're a fan of the style.

Starz was formed out of the ashes of the early 1970s pop music band, Looking Glass, which had the No. 1 hit single "Brandy (You're a Fine Girl)" in the summer of 1972. After lead singer Elliot Lurie left Looking Glass in 1974, the three remaining members (keyboardist Larry Gonsky, bassist Pieter Sweval and drummer Jeff Grob, who adopted the stage name Joe X. Dube) teamed up with Michael Lee Smith (vocals) and guitarist Brendan Harkin to continue the band and soon changed their name to Fallen Angels. In September 1975 they were joined by former Stories guitarist Richie Ranno. After keyboardist Gonsky was dropped from the group, they changed their moniker once again (to Starz) and pursued a more heavy metal direction. Kiss manager Bill Aucoin was introduced to Starz via his right-hand man Sean Delaney, who had befriended Pieter Sweval, and Aucoin began handling Starz in late 1975, helping them to get signed to Capitol Records in early 1976.

Their major hit single "Cherry Baby" in the spring of 1977 came from the album Violation, produced by Jack Douglas of Aerosmith fame. Jack Douglas produced their first two albums Starz and Violation. Most fans consider Violation their best album and compare it stylistically to Kiss and Aerosmith output. Their third album, the self produced "Attention Shoppers!", was more in the vein of power pop than heavy metal and featured a Cheap Trick influence in songs like "X-Ray Spex". Brendan Harkin and Pieter Sweval were asked to leave the band after Attention Shoppers!, reportedly since they wanted to continue in that record's musical direction, while the others favored a return to the harder sound of the first two releases. On their final Capitol album, "Coliseum Rock" (produced by Guess Who producer Jack Richardson), Harkin and Sweval were replaced by Bobby Messano on guitar and Orville Davis on bass. Previously Orville was the bassist for the southern rock band Hydra who released multiple albums in the mid-70s. His contributions can be heard on the first two LP's: 1974's "Hydra" and 1975's "Land of Money". After leaving Hydra, Davis joined Rex, a hard rock outfit fronted by Michael's brother Rex Smith, who went on to TV and pop stardom in the late 70s and early 80s.

After leaving Capitol, Starz split up in 1979 and Dube and Ranno put together a trio with bassist Peter Scance called Hard Core. In 1980 Starz reunited with a lineup of Smith, Ranno, Harkin, Orville Davis and Doug Madick (later with Prism), a drummer who was working with Smith at the time. The group played clubs up and down the East Coast in what amounted to a farewell tour. In 1981 Smith, Ranno, Madick and Peter Scance regrouped. At first they were to continue as Starz but decided to change their name to Hellcats. Hellcats recorded five new songs and released them as an EP on the small Radio Records label in 1982. Radio Records, unfortunately, went out of business not long afterward. Another mid-80s lineup of Hellcats with Ranno and Scance, this time with Perry Jones on lead vocals, also went nowhere after putting out another record in 1987 on the King Klassic label as well as a 4-track EP in 1988.

Brian Slagel of Metal Blade Records contacted Ranno in 1989 telling him of his longtime admiration of the band and asked if Ranno held the rights to any of the band's material. Ranno stated he owned two unreleased live shows and allowed Metal Blade to compile them as Live in Action, which contained cuts from a 04.08.1976 Cleveland show and a 30.03.1978 radio promotional show in Louisville, KY previously known as Live in Louisville. The release of Live in Action was a precursor to the 1990 release of the four Starz studio albums on compact disc as the inaugural releases by Metal Blade's "Classics" imprint. The albums have subsequently been re-released on CD (by other labels and the band themselves) several times, most recently in 2005 with bonus tracks primarily made up of material from the band's days as Fallen Angels, as well as a few songs from the 1992 reunion independent album, "Requiem".

Ranno eventually ran into their former producer, Jack Douglas, at an Aerosmith concert and he expressed an interest in doing another Starz record. So in 1990, Michael Lee Smith and Brendan Harkin came to NY to join Ranno in writing and recording five new tunes. Doug Madick played drums on the new project as Dube had left the music business to work as an architect and Harkin played bass, since Pieter Sweval had died of AIDS earlier that year (on January 23). Since the band was unable to acquire a new record deal, the songs were put out (with some live tracks and other odds and ends) on their own label, Drastic CD, in 1992 as the aforementioned "Requiem". After this, Ranno continued on his own with the Richie Ranno Group, which put out a CD, "RRG", in 1996.

Ranno was approached in 2003 by a British promoter who wanted to bring Starz over to the U.K. This failed to pan out but the surviving original members (Smith, Ranno, Harkin and Dube), with new bassist "Insane" George DiAna, regrouped that same year for a number of successful club dates, culminating in the two-day 2005 "Starzfest" held in Teaneck, New Jersey, which featured the entire band joined by Bobby Messano and Orville Davis. They played their entire album catalog, including songs which had never been played live before. Two concerts in California were also performed in late 2005, one recorded for a television special. In addition, a show recorded in Cleveland, Ohio in 2004 was released on CD in late 2006. The Ohio show was done as a 4 piece since Harkin had missed his plane flight to Cleveland. In 2005 Messano once again replaced Harkin as guitarist and Ranno also did shows with DiAna and Dube as the Richie Ranno All Stars.

Former Ted Nugent drummer Cliff Davies filled in for Joe X. Dube for a Starz show in San Francisco in October 2007; for additional shows in California in April 2008, Billy Howe filled in on guitar for Messano. Former Kiss guitarist Bruce Kulick did the honors at that year's Kiss Convention on May 3 in Secaucus, NJ. But in 2012 Messano was replaced by new guitarist Steve DeAcutis. Then Alex Kane took over the second guitar slot from DeAcutis in 2013. And Kane played guitar and Ginger Wildheart subbed on bass for a one night only gig in the UK at The Garage, London in London's Highbury section on December 2013. Although not being able to build up major commercial success and not well remembered, Starz has proven to be influential far beyond their commercial success. Several 1980s glam metal artists, including Poison, and Nikki Sixx of Mötley Crüe, cite Starz as a primary influence. Ginger of the Wildhearts has also cited the band as an important influence, and Kerrang! magazine included the first two Starz albums on their list of the most important heavy metal albums of all time.