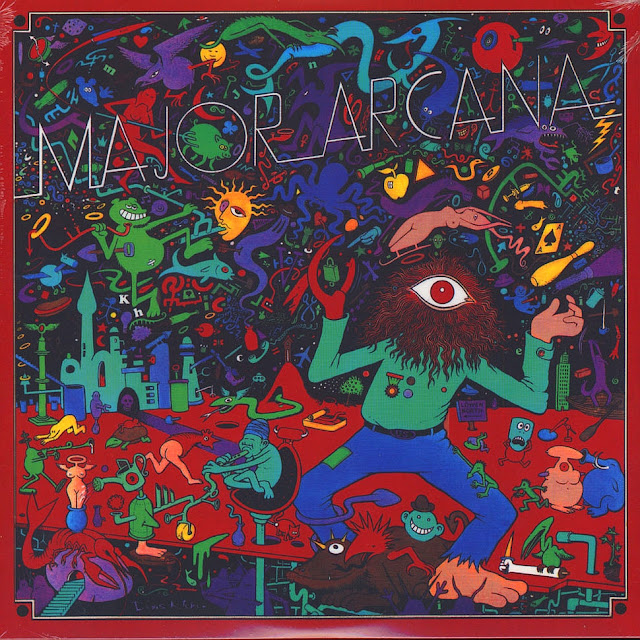 The Major Arcana or trumps are a suit of twenty-two cards in the 78-card tarot deck. They serve as a permanent trump and suits in games played with the tarot deck, and are distinguished from the four standard suits collectively known as the Minor Arcana. The terms "Major" and "Minor Arcana" are used in the occult and divinatory applications of the deck, and originate with Jean-Baptiste Pitois, writing under the name Paul Christian. Michael Dummett writes that the Major Arcana originally had simple allegorical or exoteric meaning, mostly originating in elite ideology in the Italian courts of the 15th century when it was invented. The occult significance only began to emerge in the 18th century when Antoine Court de Gébelin (a Swiss clergyman and Freemason) published Le Monde Primitif. The construction of the occult and divinatory significance of the tarot, and the Major and Minor Arcana, continued on from there.

For example, Court de Gébelin argued for the Egyptian, kabbalistic, and divine significance of the tarot trumps: Etteilla created a method of divination using tarot: Eliphas Lévi worked hard to break away from the Egyptian nature of the divinatory tarot, bringing it back to the tarot de Marsailles, creating a "tortuous" kabbalastic correspondence, and even suggested that the Major Arcana represent stages of life. The Marquis Stanislas de Guaita established the Major Arcana as an initiatory sequence to be used to establish a path of spiritual ascension and evolution. Finally Sallie Nichols, a Jungian psychologist, wrote up the tarot as having deep psychological and archetypal significance, even encoding the entire process of Jungian individuation into the tarot trumps. These various interpretations of the Major Arcana developed in stages, all of which continue to exert significant influence on practitioners' explanations of the Major Arcana to this day.

Collectors have long known about Milwaukee's Major Arcana, but I'm surprised it hasn't attracted more mainstream attention. Jim Spencer originally made his name as a writer and publisher, responsible for a series of early 1970s underground magazines, including Freek.  He also found time to record a pair of mid-1970s solo LPs that attracted local attention, but did little on the national scene. In 1974 he decided to form a band, recruiting the talents of bassist Michael Burdecki, lead guitarist Randall Dubis, and percussionist Jim Kitchen.  Released on Spencer's own A Major Label (which also released the highly sought after "Anonymous" album), "Major Arcana" served as a showcase for Spencer who handled all of the vocals and was credited with writing, or co-writing nine of the ten songs (the one exception being a cover of the traditional "Greensleeves"). Propelled by Spencer's likeable voice (for some reason every time I listen to the LP I think of Jack Black in 'High Fidelity'), musically the album was hard to describe since it bounced all over the horizon including stabs at conventional blues, commercial ballads, folk-rock, Dr. John-styled funk ("Papa Doc") and even jazzy interludes.

Curiously lots of reviews have slapped a 'psych' label on the LP. Frankly that's the one genre I just don't hear much of - maybe a little in side two's "Down Under Blues" and the closing "Greensleeves".  Maybe I'm simply going deaf. In spite of some cheesy synthesizers, co-written with Milwaukee poet Charles Dynzof (aka Chuck Simmons), "Western Wind" started the album off with a stunning ballad, with "Shake Me" and "Steal Your Love Back Home" turning in equally engaging mid-tempo pop pieces.  It wasn't perfect. "Deanna Durbin Blues'" and "Fran's Blues" were okay, if unexceptional blues numbers. Interestingly guitarist Dubis went on to pursue the genre in his post-Major Arcana career (see below).  Elsewhere, courtesy of buddy Sigmund Snopek III, the flute interludes quickly became an irritant. Still, the album's loose, low tech feel more than compensated for the somewhat fragmented musical lineup, making it a perfect LP to play on one of those cold, rainy or snowy Sunday mornings when you can't get much energy going.

Depending on which source you use, between 1000 and 2500 copies were pressed. Regardless, the LP is hard to find. Original copies are also worth owning for the cool Denis Kitchen cover art (the only album cover he's ever done), as well as the hard to find Peter Poplaski poster insert. On a related note, in 1999 Kitchen had artist Roger May convert the original print into 3D. I believe he had 100 copies printed and he sells signed artist print copies for $50 over the internet. Suffering from a number of personal issues and apparently heavily into drugs, Spencer died of a stroke. He was only 39 years old. In the late-1970s Dubis moved to Denver, Colorado where he ended up touring with a number of local acts including the late Son Seals and Sonny Rhodes. He also formed The Randall Dubis Band which has released a series of albums.