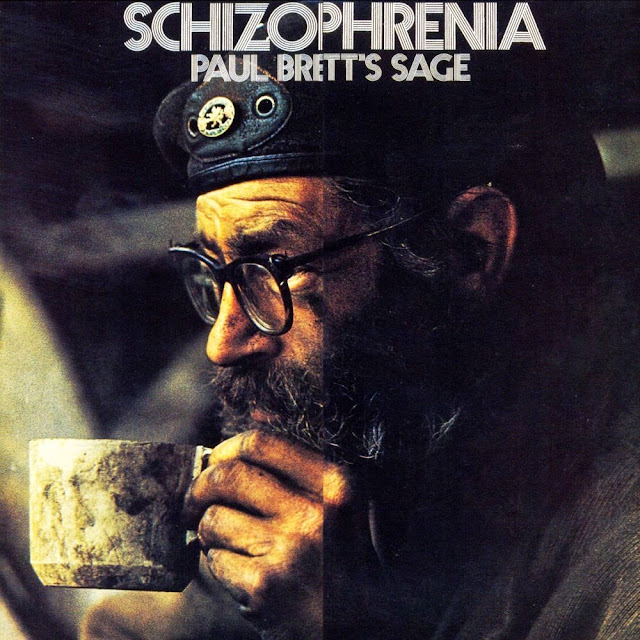 Paul Brett is widely regarded as one of the finest 12-string acoustic guitarists in the world and also has an amazing collection of guitars, something that he is probably better known for these days than his recorded output. Having been performing since the early 1960s he has contributed his skills to many records including those by Arthur Brown, Velvet Opera, Tintern Abbey, The Strawbs and Fire to name but a few. However, he also released a trio of albums with his band Sage between 1970 and 1972. All three albums were initially released by Pye Records, either on the main label, or in the case of the latter two albums, on their Dawn imprint label. By the time of the second album, "Jubilation Foundry", the band's name had changed to the more grammatically correct Paul Brett's Sage and Nicky Higginbottom had been replaced by Stuart Cowell, a second guitarist. Although Higginbottom had gone, some flute playing persists, particularly on the opening track "Cottage Made For Two". In other changes, there is more harmony singing and a greater use of orchestrations (by Mike Gibbs) plus an overall rockier feel, although both Brett and Cowell still provide plenty of acoustic in-put throughout the album, such as on their guitar playing on "Pasadena Days" and piano playing on "Keeper Of My Heart", both written by Steve Voice, the younger brother of conga, bongo and anvil (!) player Bob Voice. The simplicity of this latter song, along with the gorgeous arrangement blending strings, wind and brass, made this a killer love song.

There was also an expansion in the styles of music covered, with both sides of the single from the album "Goodbye Forever" and "Good Old Fashioned Funky Kind Of Music" being somewhat atypical and although interesting, not the strongest tracks on the album to my mind. (As an aside, the marketing prowess of Pye Records is exemplified by the single being wrapped in a sleeve featuring a photograph which included Higginbottom!). "Tuesday Evening" featured some great harmony singing from the whole band, as did "Help Me Jesus" during which Voice gets the most out of his bongos. However, it was the title track, featuring the aforementioned anvil, that took the credits with some fine playing by the ensemble, haunting lyrics and a great dirge-like quality. The three additional tracks were from an EP that was released between the first and second album which featured "Reason For Your Asking" from the debut album as lead track. Stylistically, the tracks were more akin to those on the first album, acoustic with added orchestrations on the first two tracks, with "Everlasting Butterfly" being the standout number, and a more upbeat chant on "To Everyman (Freedom)".

"Schizophrenia", the third and final album, saw the group reduced to a trio with the departure of bassist Dufall. Although not replaced, the bass playing is uncredited, Brett's old friend from the Fire days, Dave Lambert, by this time a member of The Strawbs, added piano and organ to a few tracks. From the opening grooves of "Custom Angel Man" a new heaviness to the material could be heard with electric guitar hammering between the speakers. There was still an underlying acoustic vibe with piano and acoustic guitar forming the backdrop. Twin electrics also grace the marvellous "Song Of Life - Song Of Death", possibly the only other 'rock' song besides Greg Lake's "I Believe In Father Christmas" to include sleigh bells! The vocals are also quite a bit rougher, giving the songs a harder edge, although the harmonies were still present on more commercial numbers like "Charlene" and the acoustic numbers like "Tale Of A Rainy Night" which really emphasises just how proficient Brett was on the guitar.

"Slow Down Ma!" is all over the place tempo wise, with a frantic rhythm set up by the congas of Voice accompanied by a real drum kit, played by another Strawbs member, Rod Coomes. The gentler passages have some nice lap steel guitar to add texture. Two instrumental numbers, "Limp Willie" and "Bee" are great guitar showcases, the latter featuring a solo acoustic and the former a couple of electrics, along with the sleeve note "Drink eight double rums and you can no doubt make up your own words"! As one might expect from the title, "Take Me Back And I Will Love You" is a sweet ballad, well mostly, it all gets rather heated at the end and seems to lose its original intent. "Autumn" once again harks back to the style of the original album with flute and oboe (played by Rob Young), acoustic guitar, bongos, harmony vocals and some very tasty electric guitar. A wonderful song. "Dahlia", a non-album single, has been added to complete the entire reissue of the songs of Paul Brett's Sage. A good tune that differs from the rest of the group's output in that it features some great violin work. This is undoubtedly by Mike Piggott, who replaced Cowell in the last line-up of the band, despite the sleeve notes stating that the violinist never recorded with the group, Piggott's web site states that he recorded with Brett in 1972, but no other details are given.

Paul Brett (born 20 June 1947 in Fulham, London) played also lead guitar with The Strawbs (though he was never actually a member), The Overlanders, The Crazy World of Arthur Brown, Elmer Gantry’s Velvet Opera, The Velvet Opera, Tintern Abbey, Fire, Roy Harper, Al Stewart, Lonnie Donegan, and switched to twelve-string guitar in the 1970s. His first twelve-string guitar suite, "Earth Birth", was released on his own label, Phoenix Future, and was produced by artist Ralph Steadman of Fear and Loathing fame. Critical acclaim led to Brett being signed on a four-album deal with RCA Records. His K-tel "Romantic Guitar" album went platinum in the UK, but Brett stopped recording soon afterwards. He started recording again in 2000, with long-time friend and fellow twelve-string guitarist, John Joyce.

Brett wrote for music magazines Melody Maker, Sound International and International Musician and continued working in the music industry in the later part of his career. He now writes a regular column for Acoustic, a magazine specializing in acoustic guitars. He is also the Associate Editor and Features Writer for Music Maker and Live in London magazines. He has appeared on BBC Television's Antiques Road Show and Flog It in the mid-2000s. There are now a range of critically acclaimed acoustic guitars available that Paul Brett designed for Vintage in the UK that are distributed Worldwide. www.jhs.co.uk for information. They carry individual name such as The Viator 6 and 12 string travel guitars, The Gemini, alternative baritone and 6 strings, The Viaten , tenor guitar, paul Brett signature 6 and 12 string guitars and the most recent released in 2017 is the Statesboro' 12 string which is a tribute to the blues legend Blind Willie McTell.