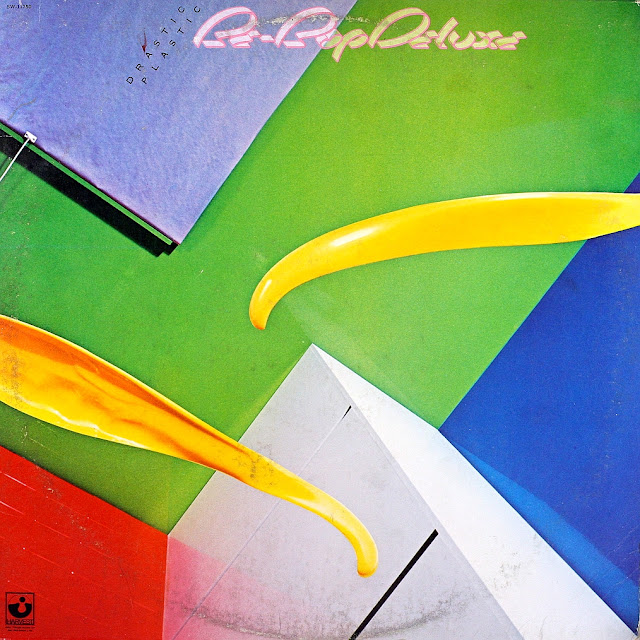 It seems very easy to mistake "Drastic Plastic" for a New Wave album, but if we are operating with genrisms in the first place, I would still rather think of it in terms of Glam Rock. Up to the very last moment of its existence, the Be-Bop Deluxe sound was loud, expansive, flashy, cocky, what­ever, even long after Nelson had reneged on the principle of choking his basic melodies with mountains of guitar improv. Yes, he did cut down on guitar heroics, add more keyboards, expand his horizons with new ideas, but "Drastic Plastic" still betrays a child of the early 1970s, as far as my ears tell me, at least. It is a good album all the same, and it may, in fact, even contain the single largest number of memorable hooks that Nelson ever had the chance to collect on a single LP. However, its being all over the place, as Bill explores page after page of the blues, pop, funk, hard rock, even rock­abilly books, is not necessarily a plus. The songs are not that good, and the overall impression is that of a highly experienced and talented, but kinda clueless artist in search of a new light for an old direction, so to speak. I enjoy this stuff, sure, but I am not certain if there would be any reason for me to come revisit it some time later.

"Electrical Language" is a pretty attractive power-pop opener with a romantic (not New Roman­tic, just Romantic) flavor and a very democratic balance between the synthesizers, now turning cold but still friendly rather than robotic, and Nelson's guitar. One could see where it might have been some invigorating introduction to a concept album of sorts, on how to express old feel­ings with new technologies, that kind of thing. Then, however, we start meandering. Titles like "New Precision" and "New Mysteries", especially if they are sitting right next together, suggest that the focus will be on technocracy, and both have a certain Gary Numan scent to them, but they are not exactly the epitome of admirable precision or deep thrilling mystery, they just kind of roll along to more or less the same martial rhythms, nothing too mystifying or terrifying about them. Rumour has it that Nelson was, in fact, closely monitoring the latest developments in his major idol's career, but these songs are nowhere near the psychic intensity of Bowie's Berlin trilogy, among other things, this is also because Bowie had Eno to keep him company (not to mention an occasional Robert Fripp as well), whereas the keyboards on "Drastic Plastic" are hand­led with taste and reservation, but without any seeming touch of genius.

Still, the record gets by merely on the strength of its bizarre plunges into the unpredictable. For instance, "Love In Flames" sounds like a proto-New Waver's parody on hard rock ecstasy, with a guitar-hero finale in which Nelson is channelling the spirits of Angus Young and Alvin Lee at the same time in a hilariously flashy mode. "Dangerous Stranger" is nothing if not a new-era re­write of Eddie Cochran's "Summertime Blues" (even the bass vocal line is retained from the ori­ginal), inessential fun but curious simply in terms of its existence. "Possession" is glossified garage, Alice Cooper style, all that is missing is that extra snarl in Nelson's voice to make the track register on the same shelf as something from Alice's own "Flush The Fashion".

Arguably the best track (although some competition is provided by the humorous catchy pop song "Panic In The World") is the album closer, "Islands Of The Dead", a fine tribute to Nelson's own departed father, no predictable sadness, no trivial sentimentality, just a solid folk-based art-pop song with a friendly pagan concept (others would have probably sung about the joys of Heaven; Bill goes beyond the boring tenets of monotheism). Still, it is not fabulous per se; its classiness is mainly provided by the context, writing a song about the dearly departed without falling on musical and lyrical clichés by the dozen is complicated even for a genius, and Bill Nelson does not quite fit my vision of genius (at the very least, just like Bowie, he is just too smart to let the genius come awake, and usually gets by through the force of intellect).

In any case, even if I do not see anything drastic about this plastic, this is yet another stimulating experience, rounding out a small, but remarkably even (with the possible exception of "Futu­rama", where I do not see eye to eye with the fans) collection with another respectable thumbs up. Less than a year later, Nelson would pull the plug on Be-Bop Deluxe, realizing that, in the im­mortal words of Decca executives, guitar bands are on their way out and finally shifting to the intellectual department of modern sound exploitation, leaving behind the seventies image of the brainy guitar rocker. Come to think of it, he may not have had another choice. But it was fun, although a very strange kind of fun, while it lasted.