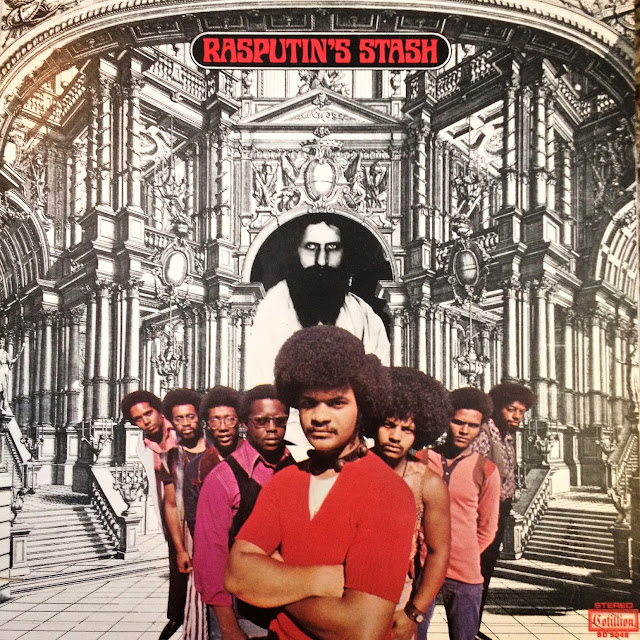 I've heard many other band names tossed around, trying to compare the sound of Rasputin's Stash; everything from Mandrill and Black Heat to a Parliament and Funkadelic hybrid. I can hear a little bit of all of those artists at certain points on this album, but the act that comes closest to their sound, in my opinion, is Tower of Power. Yeah, plenty of funky horn arrangements, the scratchy wah-wah guitar parts, some nifty keyboard flourishes and thumping bass. This album embodies all of the ingredients that made 1970s soul music so magical. Of course, these guys can play and sing well too. It's hard to figure out why they weren't better well known or didn't make more than a couple of albums. Whatever the reasons, this is a very impressive batch of tunes. This is a real find for lovers of 1970s funk and soul.

Chicago soul brothers Rasputin's Stash didn't hit the big time, but their quality funk deserves to be resurrected and enjoyed by future generations. What the band lacks in imaginative vocal styling, they more than make up for with instrumental prowess. Rasputin's Stash plays with a perfect combination of street-smart grit, professional level chops, and drug-savvy freakiness, rocking a funk that has proven popular with latter-day beat samplers. "Your Love Is Certified" leads off the debut, and it's the strongest cut, undeniable dancefloor bait with countrified slide guitar and a bracing horn arrangement. Keyboardist Vincent Willis wrote the tune and takes lead vocals, delivering silly lyrics like "Hey baby, when you come to me, I don't worry, 'cause it's C.O.D." with conviction, and it should have been a hit. The rest of the LP gets more progressive, surveying territory similar to what fellow travelers Funkadelic were exploring at the time (though without the sheer abandon of that amazing combo). "What's on Your Mind," "You Better Think," and "I Want to Say You're Welcome" are energetic pieces with great ensemble playing, but while quieter numbers like "Take Me Back" and "You Are My Flower" are well built, the lyrics and vocal performances are a bit banal.

The tracks with the most personality are a pair of hamhock-funky character studies that drip with greasy charm. After a brief spoken introduction from two jive cats sucking noisily on a joint, "Mr. Cool" slides in slow like the baddest pimp in the pool hall. Our hero brags about making it with "the president's old lady," displays his dark shades and white car, then claims to have been the first man on the moon. The chorus is marked with the declaration, "No jive, Gimme five," followed by an audible slap (later borrowed for the Beck song "High Five"). "Dookey Shoe" is more of the same, except this time the singer is preoccupied with his irresistible appeal to the women, being as he is a "nasty, nasty man" with a "dirty, funky plan in my hand." The camp factor of these tunes has grown over the years, but Rasputin's Stash was clearly out for laughs in the first place. There's a lot for serious funk mavens to play with in these grooves, and afro fetishists will probably want to buy a frame for the cover.

Paul Coleman always had a special appreciation for music, especially watching and listening to live music as a kid. He couldn’t get inside the joints but he could stand outside and listen. One summer day, while walking down the street, Coleman heard beautiful sounds coming from the third floor of this apartment building. He stopped and listened. It was nice, a man playing and singing at the piano. He found himself daydreaming. Coleman visualized himself learning to play and sing like that, and the spark was ignited. He listened daily, then did what he had to do. He couldn’t play, had no piano to even dream of working with, so as a kid he did the unthinkable, when crept in the basement window of a church where each Sunday he heard a piano playing. He was scared for sure, but did that about three days a week until he got busted; a janitor tip-toed up and scared the daylights out of me. Instead of calling the police like he thought he would, he gave me encouragement. He enjoyed Paul tinkering around on the keyboard, so that was the beginning; Coleman continued on. As he grew older he found himself singing all kinds of music from doo-wop to modern harmony groups and everything in between.

He sang in hallways vestibules and tunnels with guys that could really lay it out, all the while learning and practicing playing the piano. He never had a lesson until his father heard him play and he was so impressed he bought a piano for his talented son, a black Wurlitzer. He paid for one piano lesson then he died, that was rough. Then a neighbor said to young Paul: "come on over and we’d practice there daily". That’s where he met Jimmy Burns and Martin Dumas. It was on: the Fantastic Epics was it. This was a hot smoking show band, great singing, great musicianship and out of this world acrobatics, flips, flying though air, table walking, horns flaring, the whole nine yards. This hipness lasted until Paul got drafted into the army, one of the saddest days of his life. He went to basic training then received orders for Vietnam. He damn near shit his pants, then God revealed himself to Paul in the form of a Captain that stumbled into the officer’s club just in time to hear him play Dave Brubeck’s "Take Five". He was impressed and inquired about Paul's orders. Paul told him taht he had orders for Vietnam and he said "not anymore". Paul Coleman stayed stateside the whole time realizing how very fortunate and blessed he was.

Back home again, the chitlin circuit, a circuit you wanted to avoid, yet a circuit you inevitably had to deal with. It’s called paying your dues. Unfortunately many musicians never broke away from the chitlin scene. It took BB King almost a lifetime before he got his well-deserved recognition. The chitlin circuit is no fun: drugs, women and alcohol. Matinees at 12 o’clock noon every day for not very much pay and six sets a night, seven days a week. It’s where men survived and where men were destroyed. Only the troopers made it through. No matter how rough things were, Coleman and his new band would always get into it, no matter how tired or sick, they manage to feel it and make it happen. They loved what they did, living for the next gig. One thing about this band, everywhere they played they were accepted by black and white audiences. Before touring we worked more white clubs then black. Black clubs just didn’t pay very well and no one wants to work for pennies. A funny thing, every state they played in, their music was blasting all over the radio as they drove from state to state and every one of them had major trouble pronouncing the name Rasputin Stash. It was very irking to hear the name brutalized every time.

The name Rasputin's Stash represented determination in the face of all adversities, no matter what terrible blows were thrown at the band they grabbed the bull by the horns and rolled with the punches, a constant uphill journey they felt would be worth it in the final analysis. Playing music was much fun, and that’s what kept them going, knowing they were loved and appreciated. They followed their dreams, knowing that all positive work you put into life would manifest, this is the way life was supposed to be, and here they stand today. In a realm of survival uncertainty. The way the name was written on the first album, "Rasputin’s Stash" (with the apostrophe 's') was a misprint the record company caught too late. After pressing so many copies they decided to leave it, guess because of cost. But the name of the band finally was Rasputin Stash. It’s another bit of the very special luck the band experienced. This band picked up good management and was doing well for a short stretch when two individuals in their management team passed away and the business side was left hanging. Musical vultures began circling trying to steal whatever they could. This band has never been paid any royalties, making their life works a joke in the breath of thieves.

Let it be known, the masters for the second album Stash recorded ("Devil Made Me Do It") were stolen off the shelves of Streeterville Studios where they left them for safe keeping because they had climate control. Like, wow, what else bad can happen ? Well, they lost their guitar player, Martin Dumas III, he passed away, and what a loss. He was one of the dedicated writing musicians and they missed him dearly. Rasputin Stash - or the mispelled Rasputin's Stash is one of thegreat lost and well kept psychedelic soul & funk secrets from the 70s. Especially their first album ist outstanding and worth to listen to it. Still today.