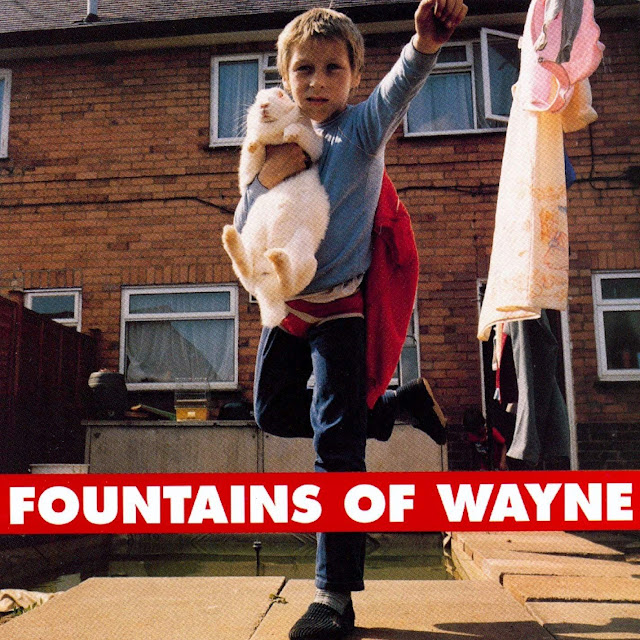 These days, it's really refreshing when you put a pop record on your stereo and proceed to have the songs firmly glued to your brain - not through the simple means of repeating the dumb chorus a couple million times, but through the slightly more demanding means of making it sound like it really matters. Sure it sounds like a rather primitive compliment, but what else do you expect ? This ain't no prog-rock, this ain't no technically immaculate heavy metal blitz with ten interlocking guitar parts. This is pop. This is entertainment. Prime entertainment, too, from a band whose name might associate more with a marketing brand than with a pop ensemble (oh, wait, it is the name of a marketing brand, isn't it ?) but whose music, from the very beginning, provides them with a firm position among the top acts of the decade. Comparisons are inevitable - Cheap Trick, Oasis, Blur, Big Star, Ramones, who else do you know ? - but it is pretty much pointless to try and distill the exact elements that the duo of Adam Schlesinger and Chris Collingwood contribute to the pool, because they don't, and they don't care. They love pop music, and they got a good ear for it, and best of all, they belong to that rare category which knows how to concoct power pop with more emphasis on pop than power.

One of the most frustrating things about bands playing happy pop songs with distorted guitars is that way too often, these two things just don't mesh together too well: the heavy guitar sound can obscure the melodies so much that in the end it seems like either the band in question is just masking the lack of talent with loudness, or else it just desperately tries to play as tough as possible so as not to pass for soft rock wimps which they actually are, no matter how much feedback they punch out of their instruments. Schlesinger and Collingwood avoid the trap. Oh, it's not as if the guitars weren't loud. They very much are exactly that. Loud, distorted, but notice that they almost never begin the song with loud distorted guitars. The melody gotta be fully fleshed out before the distortion takes over, and unless you've got a kinky habit of skipping the first minute and a half of every tune you listen to, you just won't be able to assume the "Sulking Grandpa" battle position and whimper about how these idiot punks have no melodies and webcams are destroying civilised culture, too. Fountains Of Wayne use their loudness cleverly, mainly in the function of a sticker saying "this is not retro, feel free to call it cool". The hooks are older than old; the attitude, though, is quite contemporary.

"Fountains Of Wayne" is a short album - twelve songs in all - but it needn't be longer; as it is, they get by with nary a single true filler track. Predictably, there's some faster songs, some slower songs, some sarcastic stuff, some condescending stuff, some mindless pap, some semi-serious statements. The only thing that is sorely lacking is sincerity - these guys are way too smart to be truly sincere. Sincerity - in simplistic pop music, at least - goes best hand in hand with naivety and ingeniousness, and these aren't the vices I'd be pushing on the authors of this music. "Sinceritoidness", maybe, never true heartfelt sincerity. Yet do I care? I don't. If I want me some refined, vintage sincerity, I'll take a Ringo Starr album, and considering that I'd normally take this Fountains Of Wayne creation over any given Ringo Starr record, you can see just how much this jaded cynical reviewer thinks of sincerity in the first place.

So! If you haven't heard any of these songs yet, make your day by downloading 'Radiation Vibe' (disclaimer: but but but but don't forget to wipe it off your computer without a trace after you done listening to it because you never know when a RIAA representative might stop by and lash out a web-crawling Martian tentacle rummaging through your recycle bin like the seasoned old hobo he really is!). Here's a classic lesson for all aspiring pop writers. Catchy chorus ? Well, who can live without a catchy chorus ? Not just mindlessly catchy, mind you - the vocal melody out there is twisted, unpredictable, yet never anything less than mind-blowing. "Baby baby baby come on what's wrong" - nice traditional starter. "It's a radiation vibe I'm groovin' on" - totally different vocal melody, yet fits in tighter than (dick joke censored courtesy of conservative academic mentality), and kudos for finding a previously unnoticed way of exposing the charms of the sun. (Did the Beach Boys ever use the word "radiation" ? Surely they wouldn't think of employing it in its positive aspect ?). "Don't it make you wanna get some sun", yep, it does all right. "Shine on shine on shine on" - a brilliant completion of the picture, and the main trick is not to forget to lower the tone on the final 'oooon!' - that's the ticket. In addition, there's a riff; nagging a bit, but memorable and, well, a riff is a riff, especially if it's a good one. Especially if there are funny funky wah-wah noises wrapped around it starting from the second verse. And funny use of feedback. And nice sunny harmonies.

A perfect way to start the album and easily the best song it is, but there's plenty of goodness in store as well. The chorus to "Sink To The Bottom" spooks me off and away a bit with its accentuated Oasiness (too much distortion and I've never much cared for the line 'I wanna sink to the bottom with you'), but the verses, with that little scraping sound (weird guitar tone strikes again!) against the main guitar melody still provide the necessary deliciousness. "Joe Rey" is a hyper-fast and hilariously punkish character assassination piece. Oh smarty smarty, they even get in the line about how he 'got seventeen different words for snow', but what they don't know is that the whole Eskimo story is actually more myth than truth. Smarty smarty smarty, they rhyme "cooler than I am" with "deaf girl named Diane". (I suggest they use "dumb guy named Liam" in concert from now on. It's a more precise rhyme and it's always fun to put down commercially oriented competition in new and creative ways). "She's Got A Problem" is a minimalistic ballad with arguably the juiciest, most colourful guitar tone on the whole album - it's almost a pity when they eventually drown it out in distortion, but apparently you can't go against the fixed laws of the genre. And the line "she's got a problem, and she's gonna do something dumb" sets new standards for misogyny. And that's just the first four songs. Hard to write about them without getting off topic, but, you know, this is great pop.

It's easier to write lengthy rants about bad pop - it's easier to explain why you consider something bad than good, in general. But you get my drift anyway. It's not a record where you should necessarily mention all the songs but somehow most of them seem to be begging me to advertise them with at least one turn of the phrase, and how can I refuse ? "Survival Car" rejuvenates the idea of cruising through NYC, something that I would never refuse myself. The chorus to "Barbara H." is perfect lonesome day Brit-pop even if it is all about life in Big Apple again. "Sick Day" is about an ailing girl again (sheez, these guys sure have bizarre fantasies), but it's touching and romantic in its own little sinceritoid way. "Leave The Biker" is about a strange love triangle - strange, but ever so actual, in fact, it's easily the most violent putdown of the "smelly biker" culture I've ever heard ('Now his friend leans over and says/Looks like we got us a fag/I wonder if that guy's read one word/That wasn't in a porno mag'). Nerds of the world unite, get your girls away from them bikers. They got crumbs in their beards. (Such a great, great manner of singing that line, by the way).

Only the last tune, "Everything's Ruined", sounds quite different from the rest, which is appropriate, because in good pop fashion, you have to close with a lullaby, and you got yourself one, except it's a little bit nightmarish in message, but then you don't have to listen to every line on the album, do you ? Instead, just revel in the dreamy guitars, hushed vocals, and gentle, solemn curtain-closing. No clear-cut hooks, but they deserve one passage of pure relaxing atmosphere after eleven jam-packed monsters in a row. Thirty-six minutes. That's more or less the length of a typical early Beatles album. And I'm not calling it delusions of grandeur - the trick is not to squish enough minutes of material onto a record, the trick is to squish in songs - entities - ideas - and they get in more of these in thirty-six minutes than many others do in thirty-six hours. And add to the good rep of NYC in the process, showing that life out there doesn't exactly begin and end with the Ramones.