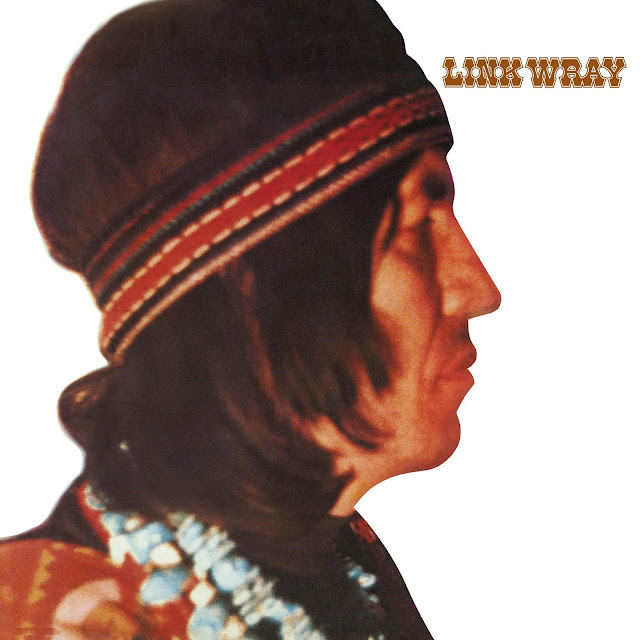 In 1971, Link Wray reinvented himself and made one of the greatest roots rock albums ever, full of fuzz blasts, gnarled folk, and backwoods gospel. Rock’n’roll doesn’t get leaner or more primal. here’s a long list of acts that the Rock & Roll Hall of Fame has shamefully failed to induct over the years, from Chic and Kraftwerk to Motörhead and Brian Eno. But to shut out the man responsible for both the power chord and distortion, the twin pillars of rock - a man who inspired the likes of Jimmy Page, Neil Young, and Pete Townshend to pick up a guitar, a man whose guitar tone was so menacing it was banned from radio play, despite the fact that the song in question, "Rumble", was a glowering instrumental. Rock, punk, garage rock, and heavy metal would sound drastically different were it not for the six-string stylings of Fred Lincoln 'Link' Wray, Jr.

Along with his brothers Vernon and Doug, Link recorded raucous early rock’n’roll, country, and rockabilly sides from the late 1950s into the mid-1960s. By the time rock became the established sound of the late ’60s, Wray had all but retired from music to be a farmer. But when the likes of Van Morrison, the Band, and the Rolling Stones turned to folksy Americana with albums like "Moondance", "Music From Big Pink", and "Beggars Banquet", Wray must have sensed an opportunity. Putting a tape machine inside a converted chicken shack on his brother’s property in Accokeek, Md. (soon deemed Wray’s "Three Track Shack"), Wray reinvented himself and made one of the greatest roots rock albums ever, full of fuzz blasts, gnarled folk, and backwoods gospel.

For any subsequent artist who has sought to strip the varnish and gunk built up around rock'n'roll, be it Nick Cave, PJ Harvey, the Black Keys, or the White Stripes, it doesn’t get leaner or more primal than this. Wray could wring profundities out of the barest of materials, which meant a three-track tape machine rather than the 16- to 24-tracks that were standard by that point. It meant 11 songs belted out by a man who lost a lung to tuberculosis contracted during the Korean War. The singular sound of the album is evident from the opening hymnals "La De Da" and "Take Me Home Jesus". Tempered by a rusted piano deemed so out of tune that the Wray brothers instead tuned down to it, those cracked chords filter down to Link’s coyote-like yowl and the raw harmonies that accompany it. But the album presents a far different Link than his early, black leather-clad greaser days. His voice is at times strangled and reminiscent of Mick Jagger and Bob Dylan; his devout lyrical concern came as the result of a religious conversion from when he contracted TB. And instead of that sinister guitar attack that defined his legacy, dobro and mandolin come to the fore. When Link did plug in his electric, the guitar was so loud that they had to drag the amp out to the yard and mic it through a window in the coop.

A gentler, wiser Link emerges again on "Fallin’ Rain" and "Ice People". The former sounds like a sequel to Dylan's "It’s All Over Now, Baby Blue", right down to its chord changes and the prophetic imagery of a spiraling world and blood on the ground. On the dobro-laced "Ice People", the rhyme of ice people not treating their fellow humans very nice might seem pat, but Link’s delivery makes the song effective. The piano echoes Burt Bacharach's "Walk on By", as Link sings about the hypocrisy of an inhospitable society that itself walks on the less fortunate and thinks "If you don’t go to war, You’re not living by the golden rule".

Listen to the simple and effective stomp of "Juke Box Mama" and you can hear the future tattoo of the White Stripes' "My Doorbell". As Wray and band create a bare-bones boogie out of a whipped snare, plunked piano, and scraped washboard, Wray’s dobro and electric guitar solo slithers around like a rattler in the near empty space. Similarly effective is the beat behind "Fire and Brimstone". An acoustic country blues guitar lick combines with a clattering beat made of drums, Coke bottle and cowbell, rattling as Link bellows about a harrowing vision of doomsday. But for all of its imagery of the sun standing still overhead and darkness on the face of the Earth, damned if Link doesn’t make end times sound like one ecstatic, howling hoedown. The garage rock stomper “God Out West” has Link’s fuzz guitar lashing at full blast as he sings the praises of the Lord so convincingly as to convert almost any agnostic. Between this and prominent placement in the recent music documentary 'Rumble: The Indians Who Rocked the World', (Link was three-quarters Shawnee), which traces the lasting influence of Native Americans on the American music vernacular, perhaps the Hall of Fame and its voters will finally see fit to put Link back on its ballot.