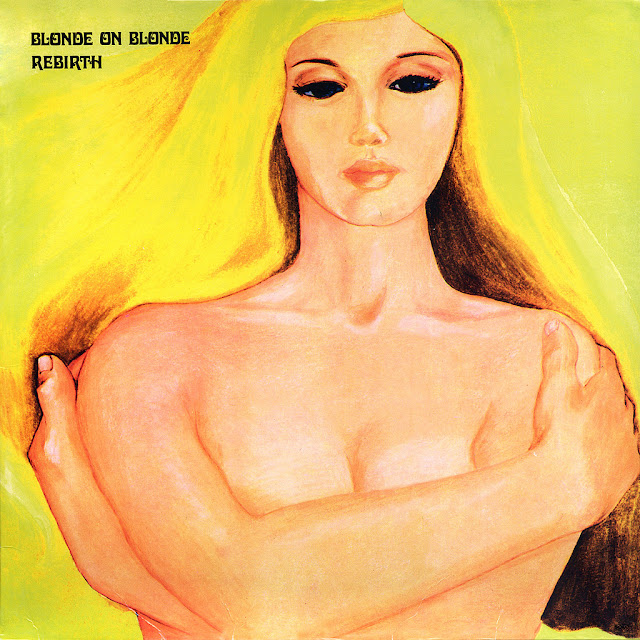 Blonde On Blonde (taking their name from Bob Dylan's 1966 album) were formed in Newport, South Wales in 1967 by drummer Les Hicks, bass guitar & keyboard player Richard Hopkins and guitar, sitar and lute player Gareth Johnson. The vocalist & guitarist Ralph Denyer was found via Melody Maker magazine, and Simon Lawrence joined the band playing 12-string guitar. In 1968 the band moved to London to give out concerts, and their publicity led them to be signed for Pye Records in late 1968. A single "All Day All Night" / "Country Life" was released in November of the same year. Then was recorded their debut long player ablum "Contrasts", which was issued by Pye Records in mid-1969 and produced by Barry Murray.

Musically the group was exploring the areas pioneered by 1967 psychedelic acts like Pink Floyd, Jefferson Airplane and Cream, but in a much larger scale of influences than them, having a more wider musical palette than the bands influenced which them, offering much to the listener open to their style, with slightly varying production quality. Their music is a dance between contrasts of free impressionism paired with predefined melodic more carefully constructed elements, varying from streetwise side to high levels of spirituality, from folk tones, classical guitar runs and mantra like instrumental runs, bursting with oriental musical influences, introducing cosmic drones running hypnotically on varying time scales, and all this paired with hard rock tones of heavy psychedelic guitar similar to Jimi Hendrix and 1960's work of Pete Townsend. There is also a strong drum/bass presence with tender pianos, cembalos and organs. Their lyrics are quite basic trippy poems, but also thoughtful, emotional and interesting at their best, little in the spirit of The Incredible String Band, which two songs they covered ("No Sleep Blues" and "I Need My Friend".) Also the most psychedelic records of The Beatles were an obvious influence (they covered "Eleanor Rigby"). There is melancholy in their music, but there is also hope and happiness among it. Like the name of their first album suggests, the band is full of contrasts, as different elements meet in successful manner, often interesting and unique results are born.

Dave Thomas, a forthcoming singer of the band, told that the source of these contrasts was their home area, which was heavily industrialized countryside. He replaced Ralph Denyer after the band had signed to Ember Records at the end of 1969, after the release of a single "Castles in The Sky" / "Circles". Ralph Denyer left to a band called Aquila, and Dave Thomas joined the band only a couple weeks before they performed at the second Isle of Wight Festival 1969 (funnily featuring also Bob Dylan). In addition of singing, Dave took an active role of song writing. His voice was soft, educated and had a pleasant vibrato, not reaching the high pitched fjord vocals of 1970's heavy metal bands. In late 1969 they recorded their 1970 released "Rebirth" album. When these recordings were finished, the band began filming for the BBC television Saturday Night Special "Whatever Next". They also gigged in London and at universities and colleges, town halls and clubs around the United Kingdom with bands like Deep Purple, Jefferson Airplane, Atomic Rooster, Genesis,  Wishbone Ash, Fleetwood Mac and Roy Harper.

During their brief existence from 1967 to 1971, Blonde on Blonde recorded just three albums. The first of these, "Contrasts" took the best part of two years to be released, but this album followed relatively quickly just over a year later. In between the first and second albums, lead vocalist and guitarist (and de facto band leader) Ralph Denyer left the band, to be replaced by David Thomas. (see the entry for Aquila on this site for details of Denyer's subsequent activity.) Given the major setback of Denyer's departure, and the difficulty the band had in coming up with material for "Rebirth", the omens were not good for the second album. It is therefore pleasing to report that this release is generally acknowledged to be the band's finest album. Given that this album dates from nearly 50 years ago, it may seem odd to talk about it as sounding dated. The fact is though that even in 1970, there was a retro feel to the music here. The sound is that of the period around the summer of love in 1967, replete with psychedelic lyrics and colours. Take for example the opening "Castles In The Sky", a song which was released as a single. The high pitched vocals of David Thomas and the harmonised ah-ah backing vocals might have achieved instant success had they been recorded just three years earlier, but to paraphrase another Dylan title, "The times they (were) a-changing".

Of the eight tracks in total here, five follow the relatively simple psychedelic pattern of "Castles In The Sky". They are certainly enjoyable, and sound like genuine proto-prog, the only problem being that by late 1970, prog had enjoyed its own birth. That is not to say there is not some good stuff to be found there. "Heart Without A Home" is a great 5 1/2 minute romp, with superb use of stereo (a sadly forgotten skill) and some really dirty lead guitar. "Time is passing" is a great piece of retro-pop, reminiscent of the style of Gary Puckett and the Union Gap. That leaves us with three tracks which actually constitute well over 50% of the album. The first of these, "Circles", continues the psychedelic atmosphere but in a far more complex and acidic way. There are nuances of the longer tracks of the Doors here, the track weaving through constant changes in tempo and melody. Once again, the lead guitar work is superb, even when it is shunted off into a single channel leaving just the drums in the other! While it all feels a bit disjointed, there is a definite appeal in the way the constituent parts make up the whole.

The longest track on the album is the 12 minute "Colour Questions". This monster sets off at lightning speed, sounding like an alternate take of Love Sculpture's interpretation of "Sabre Dance". Thomas soon steps in to bring some sort of order in the vocals, but even these are less structured than on the short tracks. The verses alternate with wild guitar segments which once again challenge the stereo separation to the full, while good old mellotron drifts in and out. The final track is actually a combination of two shorter tracks to form an 8 minute piece. "You'll Never Know Me / Release" is a more orthodox number, but features some exquisite piano. In all, an album which will appeal to those who enjoy the psychedelic music of the late 1960's more than those who seek the pioneering prog of the early 70's. While there are a few twists and turns here, including a couple of fine long tracks, this is essentially the sound of proto-prog recorded after the event.

Richard Hopkins (aka Richard John) was replaced in mid-1971 by bass, guitar and banjo player Graham Davis. This incarnation of Blonde On Blonde recorded October 1971's "Reflections On A Life" album at Monmouth's Rockfield Studios. That album goes most far in thematic contrasts, having their most experimental sounding moments in Syd Barrett resembling alienation and madness in it, coupled with straight boogie parts and beautiful melodic patterns. The album didn't gain commercial success, and after this the group disbanded. Their original 60's/70's vinyl recordings are quite expensive collector items, but luckily their records have been reissued comprehensively.