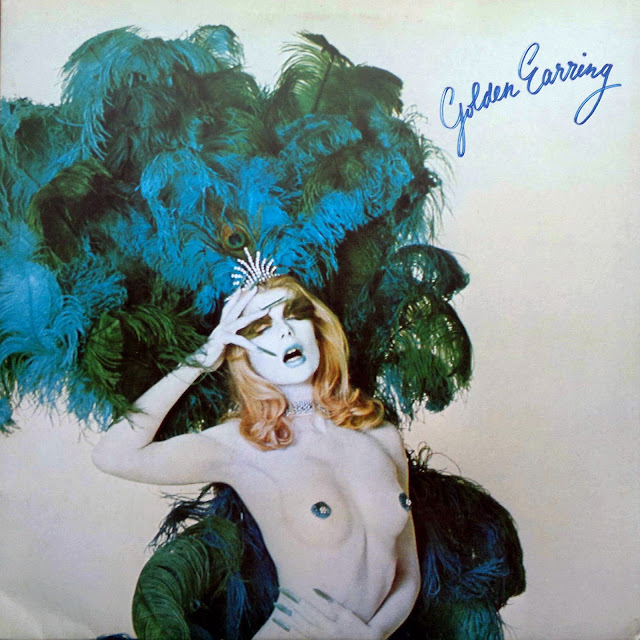 Golden Earring was formed in 1961 in The Hague by 13-year-old George Kooymans and his 15-year-old neighbour, Rinus Gerritsen. Originally called The Tornados, the name was changed to Golden Earrings, when they discovered that The Tornados was already in use by another group.Their name was from a song originally sung by Marlene Dietrich in 1947 and a hit for Peggy Lee in 1948, with which they opened their concerts. They achieve their first success in 1965 with "Please Go," as a pop rock band with Frans Krassenburg as lead singer. It reached number 9 on the music charts in The Netherlands. Their next single "That Day",went up to # 2 on the Dutch charts, stopped only by the Beatles "Michelle". Come 1968, they top the Dutch charts for the first of many times with "Dong-Dong-Di-Ki-Di-Gi-Dong," a song that spread their name through Europe. By 1969, the rest of the lineup had stabilized, with lead vocalist and multi-instrumentalist Barry Hay and drummer Cesar Zuiderwijk. As with many late 60s groups, they find themselves looking for their own style for several years before settling on straightforward hard rock, initially much like that of the Who, who invited them to open their 1972 European tour.

From 1969 and their first tour in the U.S., through their Europeen treks in the early 70s, the group slowly builds up a following. By '71, they are a regular presence on Dutch charts, and are starting to climb up the ladder in Germany. They sign on to the Who's Track label, which released a compilation of Dutch singles, Hearing Earring, helping the group break through in England. Already on the way up to stardom in Europe, 1973 becomes their big year.That most driven of driving songs is released on the world. Golden Earring have grabbed the golden ring with "Radar Love" and the album "Moontan". They hit the American market for long tours with such acts as Santana, the Doobie Brothers, & J Geils. The world seems theirs. But the lack of a follow-up hit ensured that their popularity remained short-lived in America, even though they remained a top draw in Europe over the rest of the 1970s, as their singles & albums continue their success.

1982 saw a brief American comeback with the album Cut and the Top Ten single "Twilight Zone," but as before, Golden Earring could not sustain its momentum and faded away in the U.S. marketplace. "Radar Love" even enjoyed a second round of popularity when pop-metal band White Lion covered the song in 1989. Golden Earring celebrated their 47th anniversary in 2008 and have been performing almost continuously since their foundation in 1961. They have had the same unchanged line-up of the same four musicians and friends since 1970, augmented time to time with a fifth member (Dutch keyboardist and leader of legendary band Supersister, Robert Jan Stips).

And for a band known to many for one of the all-time classic rock tracks - "Radar Love" - they are a group that has built up a solid & very varied body of work that will interest beyond the typical rock n roller. Most people know Golden Earring for their big hit "Radar Love" made popular from everything from huge amounts of airplay to appearances on The Simpsons and the like. Of course the band had many, many songs beyond that, despite how many people actually knew this fact, Moontan is their 9th album as they were founded sometime in the early 60s. The album itself has far better moments than just this one song as well, and people who are familiar with it often call it the band's most progressive album.

Playing an excellent mixture of progressive rock and pure classic hard rock, this album can really catch your ear off first listen. Of course it opens with the hit tune, "Radar Love", the pounding mini-opus with a driving bass and emotional voicing - and if you've only ever heard parts of this song and think it's a simple pop song do yourself a favor and really listen to it the first time you listen to this disc in its entirety, because it is very impressive in its whole form. Other songs on the first side prove to be just as impressive, and hey, there's only two of them. "Candy's Going Bad" is probably the most simple composition on the album, but it's still a good, lengthy hard rocker with an interesting story attached to it that makes it a worthy addition to the album. However, this is just where the album starts getting good, as from here on out no song will dip down bellow 8-minutes. "Vanilla Queen" is the next on the bill and it starts with a good 2-minutes of spaced out intro before it actually moves into the more hard rocking aspects. It falls back into a trance-like state just over the half way point and then takes a turn for the psychedelic once more as it moves into the brass and instrumental sections of the song.

And yet, the best is still to come as we move into the second side of the album. Big Tree, Blue Sea is disturbingly absent from the non-American version of the album, which is a shame, because this is likely the album's best individual song. Folk influences are abound in melody, but also in that Jethro Tull-like flute that's used throughout. Sweeping keyboards give a typically progressive sound to the album as well as it moves through some moments that could have been taken strait from Genesis's "Trespass" in their haunting tranquility, before moving back into moments of pure hard rock. An excellent number that does justice to owning one half of the second side. "Are You Receiving Me" is the final track by the American listing and also the longest. This one is powered by a Captain Beyond-like guitar riff and some excellent percussion, once again it moves through several moods, speeds and tones without ever slowing down the momentum of the track. This pulls together the final track of the album and makes for a satisfying finish.

If you've ever wondered about the reason for including Golden Earring on the Archives this album is probably not the only reason, but it serves as a great example. Multiple instrumental passages, complex arrangements, lengthy tunes, changes in speed and tone throughout each song - all the elements are there, and it even includes things like keyboards, flutes and brass instruments just to keep the people happy. Everything comes together so very well, and based on this one album it's actually a little difficult to see why the band wasn't added earlier. All that aside, this is certainly an album worth getting. Any progressive fan will be able to appreciate this album to a very large degree, and if you're going to be getting further into the band this is probably the best way to start. In terms of 'progressive-ness' this one ranks among the classics, and in terms of quality it does just the same. Make sure you check it out, because it's certainly worth the investment.