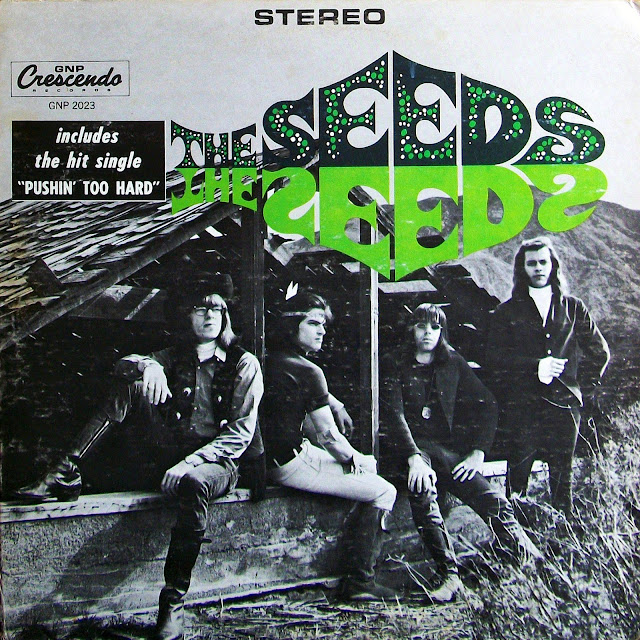 The debut album by The Seeds was indeed an audacious and brutal missive from a band of sneering reprobates with the merest of musical proficiencies but with unlimited punk attitude. At least, that’s how it must have seemed when The Seeds was released in June 1966. The world had already been introduced to Sky Saxon, Daryl Hooper, Jan Savage, and Rick Andridge on the group’s three singles, but this was an entire LP, and it didn’t let up from start to finish. The fact that they were actually nice, regular guys (generally speaking) was hard to tell amidst the demented clamor rising from the LP’s grooves. The music on "The Seeds" has its roots in the primitive garage sounds of bands like The Kinks but it’s further out there than anything else of the time. On this debut album, Sky Saxon and his gang tear through a collection of simple tunes at warp speed, doggedly recycling a limited repertoire of musical ideas and skills. What makes it hold up to repeated listens is the band’s sheer conviction. Every note is bursting with breathless emotion, technical proficiency be damned. In fact, the three instrumentalists, especially keyboardist Daryl Hooper, were quite adept at their instruments but the music of The Seeds did not call for clever tricks or complicated arrangements.

Resolutely sticking to its simplistic script, The Seeds commands attention. The music is simple: drums and electric guitar, with Hooper’s organ dominating. The intricacies of The Beatles aren’t to be found here. Much of the appeal is in Sky Saxon’s unusual voice, a nasal sneer to end all nasal sneers. Sky, aged 29, was so far ahead of his time that the world would take at least ten years to catch up. He spits out his boneheaded teen-angst lyrics, interspersing them with various grunts, howls and wails. The Seeds contains several engaging new ideas: ghostly proto-psych on "Can’t Seem To Make You Mine" and "Try To Understand"; fearsome voodoo punk on "Evil Hoodoo"; rambunctious defiance on "No Escape" and "Pushin’ Too Hard". The album suggests some of the avenues that the band would explore on its subsequent albums like "A Web Of Sound" and "Future". There is virtually no studio trickery or advanced musical theory applied to this album; while managing to avoid monotony, you can’t really say that it’s sophisticated. Which is kind of the point; there’s gold in the dirty ditches of the record’s dingy landscape. Aptly-named guitarist Jan Savage has few tricks up his sleeve; his short, simple guitar figures get their power from their economy, their magical and precise placement. Just a couple notes here and there add much to the structure of the music.

Similarly, Daryl Hooper sprinkles a few notes around when necessary, and it is his mid-60s sound that give many of the songs their soft, curious underbelly. Drummer Rick Andridge keeps the beat without a lot of clever fills. At times, different second guitarists would join The Seeds in the studio, including Russ Serpent; bass guitar (miscredited to Sky) was played by other guests, including Harvey Sharpe. ("Fallin' In Love" and "Evil Hoodoo" do not feature Andridge; an alternate drummer whose name is lost to history handles the duties on these two songs). All in all, with nothing but a couple pieces of warped lumber and a few ten-penny nails, The Seeds build a majestic garage-punk monstrosity of a skyscraper on their debut album. Sky Saxon’s lyrics on "The Seeds" are perhaps best left unmentioned. They seem as if they were written in about ten minutes, that’s for the whole album, and consist mostly of standard circa 1965 pop music clichés. 'Sky’s lyrics were infected by a wondrous charm', as a 2008 press release charitably worded it. Several of the songs include the phrase 'night and day'. Sky Saxon always needs your love both night and day and he’d never tire of urgently telling you. Of course, at the end of the day the lyrics really don’t matter on "The Seeds" anyway; it’s Sky’s glorious buzzsaw voice and the effusive wackiness of the music that spins your head around on each listen.

"Can’t Seem To Make You Mine" is slow and warbly, and this is the recording that the new band made at its very first session in April 1965 and which became their first single. Every member of The Seeds shines on this track, the musicians contributing admirably interlocking parts (especially Hooper’s groovy organ and Savage’s queasy answering guitar figures). Sky squawks and grunts and sighs through his aggrieved lyrics. This is "(I Can’t Get No) Satisfaction", played at half speed but no less frustrated. "No Escape" is a peppy two-chord party music, led by Daryl’s relentlessly chirping organ notes. Sky breathlessly cries for freedom, audaciously slipping frequently into something like a stoned, sandy southern drawl ("nowhere to RAWN, nowhere to HAD"). The band’s bellowed backing vocals are great, and give the song its unified gang feel. In "Lose Your Mind", Sky growls compellingly over a harsh Bo Diddley beat that’s punctuated on every beat by Daryl’s keyboard tones and a scuzzy harmonica solo. Nobody sounded more garage-y than this. ("Lose Your Mind" has been excised from some CD re-releases of "The Seeds", notably single discs that pair the band’s first two albums. If buying this album make sure it includes this track).

The following "Evil Hoodoo" might be arguably the most audacious song on "The Seeds". This repetitive, brutal five-minute slab of heavy metal garage mythmaking is great. Sky is wearing his most powerful rattlesnake necktie but remains vulnerable to a witchy woman and her wicked spells. Incessant 'whooooah' backing vocals, and the sustained insanity of the performance (edited down from fourteen minutes, as was the plan all along), contribute to the head-spinning atmosphere of this incandescent classic. Punk and psychedelia begin right here. "Girl I Want You", led by a fuzzy, electronically-enhanced keyboard and guitar figure, retains the sneering punk of the rest of the album but is one of its more melodic moments. Kind of like "Evil Hoodoo" after Sky has submitted to the woman and all seems well. Absolutely chaotic, but happy. Then comes "Pushin’ Too Hard". The big song, which would be The Seeds' only Top 40 hit and would help define the band for decades. Not unfairly, either: everything seems to come together on this magic performance, with its razor guitar, soft keyboards like a dark pillow, reliably exasperated Sky (who scribbled the words after an actual argument with a girlfriend), and just the right length and accessible production values for a wider appeal.

The following "Try To Understand": Released as an unsuccessful single in its own right before gaining legendary status as the B-side of "Pushin' Too Hard", this is like a fast version of "Can’t Seem To Make You Mine", with a to-die-for chorus and amazingly focused playing. That this song wasn’t a major hit in its own right is not an indictment of The Seeds nor of GNP Crescendo, but the record-buying public. This song is every inch the equal of "Pushin' Too Hard". Another statement of intent from Sky and The Seeds, full of raunchy guitar, queasy keyboard and guitar touches is the song "Nobody Spoil My Fun", and a scandalized Sky wondering why people always want to spoil your fun. Mid-tempo, echo'y bleariness to let you come down a little from the two sweaty classics that preceded it. "It’s A Hard Life" is a fast-paced, jittery punk with some inventive guitar weirdness and Sky calling for backup from the rest of the band who vocally support him with a throaty "Yeah!" in the song’s opening seconds. Jan hits his guitar strings with a physical ferociousness not heard in rock before on this track’s more manic sections.

"You Can’t Be Trusted": An adventurous structure finds the band soaring high and swooping low in between dramatic stops and gritty keyboard solos. Sky addresses yet another misbehaving woman, but this isn’t the warning of "Pushin' Too Hard", it’s a gleeful brush-off for good. The shortest song on The Seeds, which is saying something. A quick I-IV-V blues-style tune with some nice guitar touches and trilling keyboard part can be heard in "Excused Excused". Sky, who (guess what) "needs your love both night and day" objects to the fact that the girl only wants to be around him when things are good; when he’s down and really needs her, she just comes up with reasons that she can’t come around. He doesn’t even want her as a friend, not as hateful as "You Can’t Be Trusted" but close. The closing of the album marks the track "Fallin’ In Love". Recorded at the same session (without Rick Andridge) as "Evil Hoodoo", the album closer is a broad, good-timey performance that finds Sky, uncharacteristically, more subdued and conventional (despite his curious references to 'a purple cloud'). Hooper offers one of his more complex keyboard solos on the album, and "The Seeds" ends on a song that acts nicely as a cap to the madness that came before.