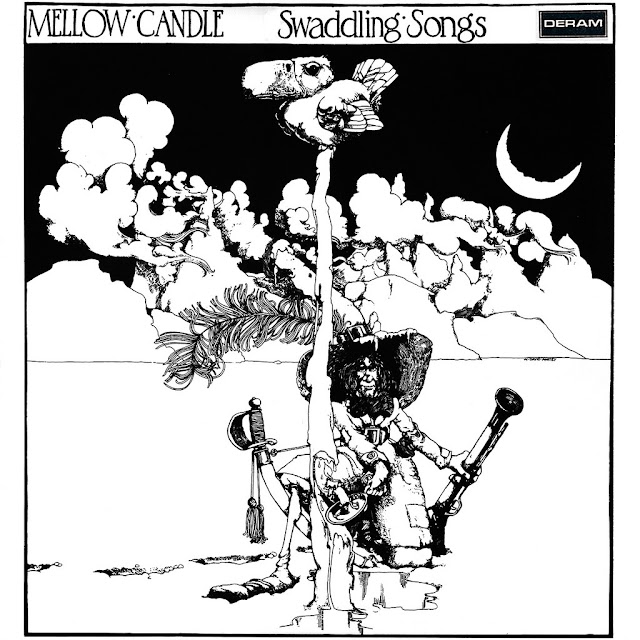 Originally from Dublin, Ireland, Mellow Candle specialised in imaginative psychedelic folk rock and early progressive rock, with the singing talents of two ladies (Alison Williams and Clodagh Simonds), in addition to bassist Frank Boylan, drummer William Murray and guitarist Dave Williams. They covered both ballad and rock domains equally well. The music displayed a prodigious degree of natural talent for songwriting, harmonizing, and arrangement. A folk-rock in the vein of Fairport Convention or Fotheringay.

"Swaddling Songs", their debut album is rich in varied and a true sonic marvel of beauty and simple melodies, and, most of all, a blending of two of the most beautiful voices in all of music. This is a fantastic album that deserves new discovery. A second album, "The Virgin Prophet", featuring unreleased and different versions of songs found on "Swaddling Songs", was released in the mid nineties. In some respects, I think this ranks with the best Fairport Convention, Pentangle and Renaissance albums at the top of the folk rock genre. I’ve heard several of these tracks from their "Swaddling Songs" in early form thanks to the 1996 rarities & demos release "The Virgin Prophet", and I have to say these finished versions benefited greatly from some studio polishing and production.

Mellow Candle are near-legendary in prog folk circles, and deservedly so. This was their only studio release, but every song here is a folk delight with mild psych overtones and occasionally even a little rocking out. Best of all, the band features a pair of women whose voices seem to have been made to sing folk music - Clodagh Simonds and Alison Williams. Both have rich, expressive voices that carry each tune to heights that a male troubadour would not have been able. The two of them also either wrote or co-wrote all but two songs on the album: "Vile Excesses" and "Buy or Beware", both of which are credited largely to Ms. Williams’ brother David. These are short songs in traditional folk form for the most part, all of them lasting less than five minutes with several of less than three minutes. But each seems to portray a complete thought or theme without coming across as rushed or incomplete, something novice folk bands sometimes have a tendency to do.

The instrumentation is pretty simple: bass, guitar, drums and keyboards (mostly piano). The bulk of the music comes from the voices of the two ladies, typically with one singing lead and the other harmonizing, but occasionally in duet. The two of them make for a beautiful medley of sound throughout. Most of the tracks are unhurried, introspective and somewhat earthy in tone. A few times David Williams ratchets up his guitar a bit with a combination of psych and mellow rock flair such as on "Lonely Man" and "Buy or Beware", but these times are few and far between. A few tracks like "Dan the Wing" and "Break your Token" have a decidedly Irish lilt to them, but mostly this is just some good folk music without pretension or pompousness. One track sticks in my mind as something I’m sure I heard as a youngster, the Mamas & Papas sounding "Buy or Beware". Ms. Williams and Ms. Simonds sound just like Mama Cass Elliott and Michelle Phillips. I don’t know if this was ever released as a single, but the line “I want no water with my wine” strikes me as something I’ve heard before.

This is a very easy to listen to album, and doesn’t really strike me as dated-sounding although the musical style was in decline even when this was recorded in the early seventies. No matter, prog folk fans hold the album in high esteem for the most part, and now that I’ve had a chance to play it a few times so do I. Four stars for the ladies and their accompanying men. Too bad Mellow Candle weren’t able to make more of a go of things back then, but this album leaves an impressive and lasting legacy. Highly recommended to prog folk fans for sure.