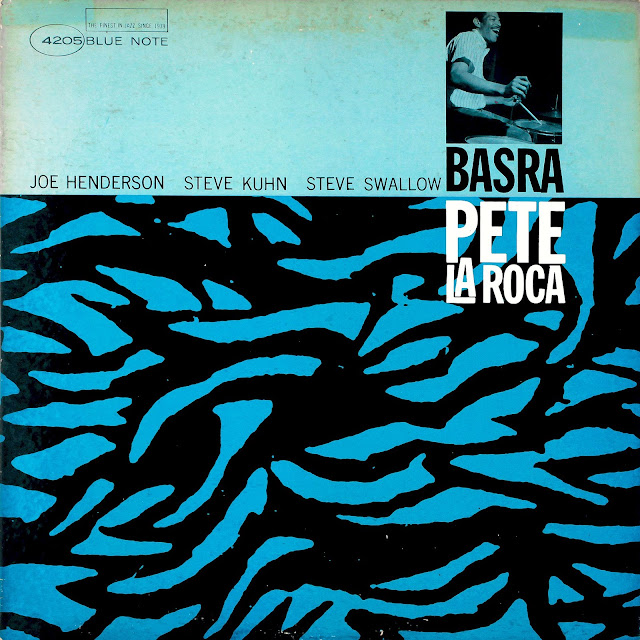 1965 was a stellar year for Blue Note records. The label had been consistently releasing great jazz albums since 1939, and in the 60s found a new breed  of musicians who blended the bebop and hard bop styles that identified the label during the 50s with new freedom and outward looking perspectives. Alongside albums by the established Lee Morgan, Dexter Gordon, Horace Silver and Jackie McLean, 1965 saw the releases of classic albums that pointed a way forward such as Herbie Hancock’s "Maiden Voyage", Bobby Hutcherson’s "Components", Sam Rivers’ "Contours", Tony Williams’ "Spring", Andrew Hill’s "Compulsion" and Don Cherry’s "Complete Communion". Among them one release is the often forgotten but no less brilliant, the sole album as a leader of Pete La Roca on the label, entitled "Basra".

Pete La Roca was born Pete Sims in 1938 and in his early years as a professional musician played timbales in Latin bands, a period that gave him the name La Roca (the Rock) and a distinctive style that manifested itself in his drum set accompaniment and solos in later years. His first major gig was with Sonny Rollins to who he was introduced by Max Roach, playing live with the master saxophonist between 1957 and 1959. A sole album with La Roca survives from that period, the 1958 Blue Note album "A Night at the Village Vanguard". From the afternoon set, "A Night In Tunisia" is a good example of La Roca’s driving style and soloing in a piano-less trio. Elvin Jones, who also played that gig in the evening set, remembers: "And we came out there on Greenwich Street by the Village Vanguard and Wilbur Ware was standing outside under the marquis, and when he spotted me he said, "Jonesy! Sonny’s looking for you". And I said, "Sonny who ?" I didn’t know Sonny. So Wilbur said, "Come on downstairs, he wants you to play with him". I figured we could go down here and get a drink here just as well as anywhere else. So we went down the steps. And Pete La Roca and Donald Bailey were playing, that was his regular trio. And I thought, "How am I going to play ? Pete La Roca’s playing. What am I supposed to do ?" So at any rate, as it turned out, Sonny wanted me to play that set with him. And I did. And that’s how that album came about. So those were Pete La Roca’s drums".

In 1959 La Roca played on Jackie McLean’s album "New Soil". The album might be considered a typical fare of well-played hard bop music but is significant for Minor Apprehension, a fast swinging tune written by McLean that was first recorded in 1955 as part of the Prestige album "Quintet/Sextet" by Miles Davis under the name Minor March. While the tune itself is still not distinctive, it features an outstanding drum solo by La Roca that predates some of the finest drummers of free jazz music in the 60s like Ed Blackwell, Tony Williams and Paul Motian. The solo is surprising, as it emerges out of nowhere after 5:00 minutes of fast swinging rhythm. The drums are suddenly left alone, and La Roca is not keeping time on his Hi Hat or Bass Drums like many swing or bop drummers do. The accents and fills drop seemingly in a time pattern known only to him. Maybe this was the first 'free time' drum solo captured on vinyl. Ironically, La Roca was not a big fan of free jazz: "Free music is in a constant state of surprise and, consequently, presents no surprise at all. So, I’m not really a fan of Free music. Having said that, Jazz is based on individual expression and I’m compelled to respect the Free player’s option to express himself as he chooses".

La Roca’s big chance came early in 1960 when John Coltrane formed his first quartet after leaving Miles Davis’ band, and due to the unavailability of the musicians he wanted (McCoy Tyner, Jimmy Garrison and Elvin Jones), started a group with Steve Kuhn on Piano, Steve Davis on Bass and Pete La Roca (recommended by Miles Davis) on drums. The band played for 10 weeks at the Jazz Gallery in New York. A low quality recording of La Roca from June 10 1960 survived, including "Every Time We Say Goodbye". La Roca fondly remembered those times: "It was the perfect time for me to play with John. He had recently recorded the album "Giant Steps". The title tune was difficult for me. It has a hard-wired harmonic rhythm (i.e., the pattern established by the points at which a new chord is played). Drummers use those points as accents or anchors. When they dominate, as in "Giant Steps", most drummers will do essentially the same thing and sound essentially the same. I never want to sound like every other drummer and, at the same time, I can’t ignore the character of the material. So, "Giant Steps" was difficult". Within a year Coltrane replaced all band members, formed his classic quartet and the rest is history.

For a number of years in the early 60s La Roca was the house drummer as the Jazz Workshop in Boston. Keith Jarrett, a student at the time, recalls playing with him: "While I was still at Berklee, I was working upstairs at the Jazz Workshop at the bar, accompanying singers, which I liked. We had a break, and I went downstairs and didn’t hear any music, and I thought what’s going on ? Herb knew me from Berklee big band class, and John said, so you want to play ? I said, "Yeah!" John said, "Ray’s late, we want to get started. Pete La Roca’s on drums". I said, "OK!" meaning, hey, OK, of all the drummers I had heard up until then, Pete was one of the guys I considered as one of the best examples of how you could play without sounding like anybody else. And his time concept was unusual and I realized this is not amateur night anymore! That was a wonderful few tunes".

In the early part of the 60s La Roca continued to record with some of the best names in Jazz. He was a frequent session drummer on various Blue Note records, including "Page One" and "Our Thing" by Joe Henderson, both released in 1963, and the live album "The Night of the Cookers" by Freddie Hubbard from 1965. La Roca established a lasting relationship with Pianist Steve Kuhn during the 60s. After the gigs with John Coltrane they recorded as a trio with Scott LaFaro in 1960, leading to Stan Getz using that trio in 1961, a short stint for La Roca who was replaced by Roy Haynes after a few weeks. Kuhn and La Roca played together again in Art Farmer’s band in 1964, after Steve Kuhn replaced guitarist Jim Hall. A nice video survived of La Roca with the original Art Farmer quartet, playing "Sometime Ago". The album "Sing Me Softly of the Blues" was released in 1965 on the Atlantic jazz label. The title track is a favorite Carla Bley composition that appeared years later on her "Dinner Music" album. In 1966 Steve Kuhn released the album "Three Waves" with Pete La Roca and Steve Swallow on upright bass. The album included another Carla Bley composition, "Ida Lupino" and a lovely ballad, "Ah Moore".

That same trio was the basis for Pete La Roca’s album "Basra" on Blue Note records, recorded on May 19 1965 with Joe Henderson on tenor sax. A gem among many wonderful albums the label released in the 60s, it starts with a song La Roca likely played during his Latin bands period, "Malagueña" by Ernesto Lecuona. The band’s take on the composition by the legendary Cuban composer, who escaped Fidel Castro’s regime in 1960 and moved to Florida, is an inspired group ensemble vamp propelled by La Roca’s cymbal work. Scott LaFaro used to complain during their gigs with Stan Getz that all he hears from La Roca is cymbals and he wanted more drums. I have no problem with that cymbal work on "Malagueña". La Roca had a knack for ethnic music, and when asked about this he said: "among the tunes I’ve recorded are "Basra" (Middle Eastern),  "Malagueña" (Spanish), "Drum Town" (African), "Nihon Bashi" (Japanese) and Turkish "Women at the Bath" (a set of six tunes based upon themes from various Middle Eastern countries and Turkey, intended to 'illuminate' the Ingres painting that is so named). One of my tunes, "Raga", is based upon a definition I once read of how an Indian raga is constructed, but I haven’t had the opportunity yet to record it". The highlight on the album is another example of using the essence of ethnic music in the context of jazz, the title track "Basra", a rhythmic 10 minute meditation based on a single chord. 6 minutes into the song La Roca plays another great solo. I love not only what he plays, but the tasteful gaps between his phrases. A key to great music is often the silence between the notes, and La Roca is a master of that.