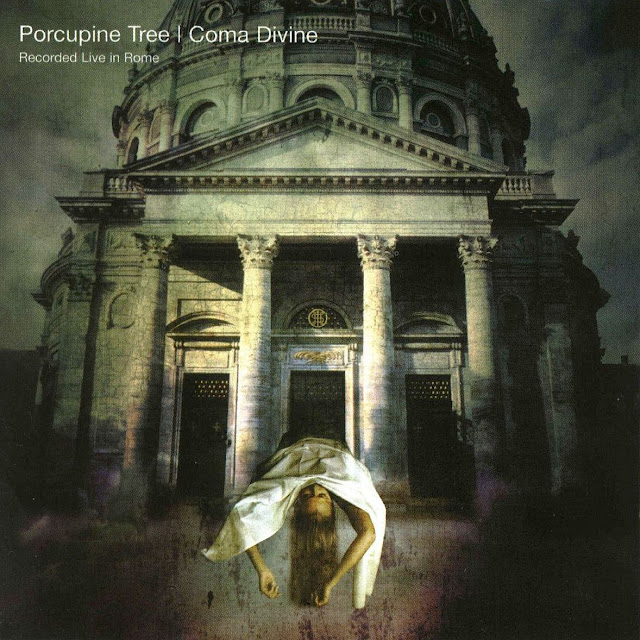 Porcupine Tree are incredibly hard to describe because their music doesn't fit into any one genre. I like the description on the back of the album "Signify" (one of my all time favorites). It says Porcupine Tree have managed to defy genres and blend together numerous ambient, rock and avant-garde styles to create a musical landscape that is both refreshing and compulsively seductive. "Coma Divine" is one of those live albums that I loved since the very first listen, one of those live albums which have caught my full attention, one of those concerts that I would have loved to attend, when all the music is almost perfect (or perfect) and you think to yourself "God, lucky people who attended to that concert, they had a wonderful night". I am pretty sure that sometimes the concerts that the band choose to record and then release as a live album or the DVD, are not necessary their best shows ever, but I am sure that they have to be something special as well, this time, the "Coma Divine" concert in Rome reflects the quality as musicians and composers of the band, linked as well with their excellent communication with the audience, you can notice it while listening to the album.

The band started as a solo project of singer-songwriter-guitarist Steven Wilson who, back in the early 90s, released a series of increasingly spaced-out ambient excursions. Porcupine Tree is one of the most innovative bands in prog today combining intense musicianship, unconventional composition and superb studio production. They are unquestionably one of the UK's most inspired and inventive rock groups. The bands 4th studio album called "Signify" saw Porcupine Tree truly gell as a studio band producing a blend of psychedelia, heavy rock, melancholic pop, kraut rock, and wild experimentation that brought the best out of each band member. Their latest two albums ("Stupid Dream" and "Lightbulb Sun") move the band further away from their influences and into their own catagory, by which other bands eventually will be compared. But if you are a fan of progressive, thoughtful, briliantly executed and flawlessly produced music, you will do no better than Porcupine Tree.

Porcupine Tree's eighth studio album, "Deadwing", was released in March 2005 by Lava Records / Warner Music. Less rock-oriented than the previous album "In Absentia", "Deadwing" is partially based on a "surreal ghost story" screenplay written by Steven and sometime Porcupine Tree / No-Man art collaborator Mike Bennion. The 60-minute, nine-track album contains material varying from short airplay-friendly songs such as "Shallow" to lengthier pieces like the 10-minute-plus "Arriving Somewhere But Not Here". Most of the music was written by Steven but the album features the largest amount of full-band compositions since "Signify" in 1997. The album also features guest appearances by Adrian Belew (King Crimson) and Mikael Åkerfeldt (Opeth). In 2007 the band scored it's biggest chart success to date with "Fear Of A Blank Planet". Featuring contributions from Alex Lifeson and Robert Fripp it made the album charts in both the UK and USA and saw them play to larger and larger crowds on the subsequent world tour. This uplift in fortunes was due in part to the band signing to Roadrunner Records who really got behind the band. In 2009 the band released "The Incident" their most ambitious work to date and also their most successful, charting highly in the UK, USA and across Europe.

But let's now get back to the incredible "Coma Divine" live adventure. The album is opened by a noisy, uplifting, and high energy instrumental with lead guitar as the main instrument backed up by spacey keyboard sound. It's really nice opening. When the CD reaches track 3 and 4 "Waiting Phase One and Two" this is where I first came to my orgasm about the music of the band. It's so simple, melody-wise. But it creates strong musical nuances that bring you an experience of another life that you never imagined before. True, this is not an exaggeration, it's a reality. All musicians play excellently in these two tracks. The guitar playing and vocal of Steven Wilson are both marvelous. The other noticeable thing in "Waiting" series is the very nice percussion, both . the play and the sound. Top class! Bass playing is also dominant. I have a habit of playing this two tracks as loudly as possible and getting louder at the interlude when guitar sound and bass backed by very dynamic drum playing come together harmoniously. This piece of music is really wonderful.

"The Sky Moves Sideways" opened with a very mellow intro and flows naturally to another piece of more upbeat music. It requires patience in listening to this intro. Yeah, patience and patience! But it's okay as you have just done with relatively energetic music of "Waiting" series. Then enters the guitar part and the music starts to uplift a little bit. Steven Wilson voice enters nicely here at around minutes 3:35 "We lost the skyline" backed by spacey keyboard. Nice entrance. Having finished with the firs vocals then the guitar enters nicely again. What a terrific segment here. And then at around minutes 7:45 the dynamic bass guitar comes into play followed by nice percussion and backed by spacey keyboard. Here we go, you don't need patience anymore as the music goes uplifting now. It's so energetic with solo keyboard. The ending part of this track closed nicely with guitar as lead combined with other instruments altogether. Top notch music.

"Dislocated Day" is an upbeat music with dominant bass playing. I don't need to elaborate any further as this track is really excellent. "The Sleep Of No Dreaming" is another nice track starts mellow and continues into more energetic music. Observe how Wilson sings this part "The Sleep Of No Dreaming", followed by his lead guitar. Very nice. Observe also the drumming style of this track. Cool. By the way, almost in every track there must be strange sounds produced either by guitar or keyboard. The sounds create great nuances of Porcupine Tree and I guess that this has become their musical identity. The rest of three tracks "Moonloop", "Radioactive Toy" and "Not Beautiful Anymore" are all excellent tracks that don't require further review. Marvellous. The only thing that I wanna mention is the piece at the opening of "Radioactive Toy" when Steven starts communicating with the audience and followed by clapping from the audience. It's great. This album is a perfect synthesis of the first phase of Porcupine Tree music, combining tracks of "The Sky Moves Sideways", "Up The Downstair" and "On The Sunday Of Life", beside incorporating some of the album "Signify". Well, my words won't be enough to show how great the album is, a magnificent work.