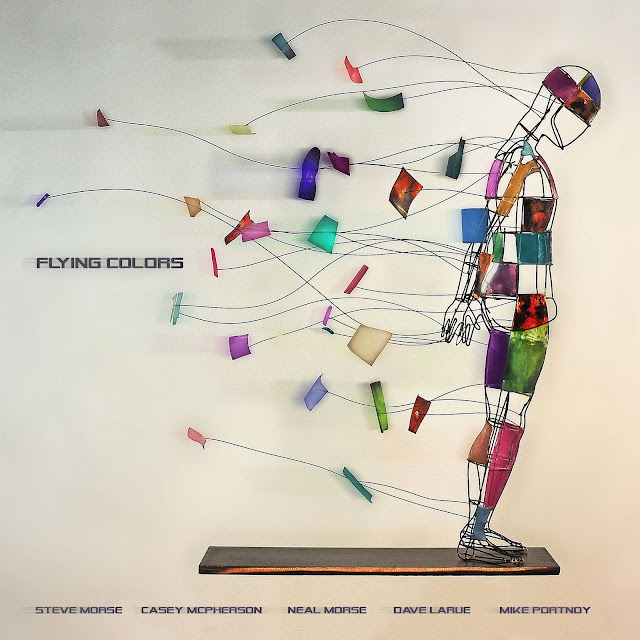 Here we had yet another super group and another band that Mike Portnoy was in ? Well, yes that is a fact and those of you that enjoy great rock music of all sorts should be rejoicing right now because a classic album is waiting to hit those starved ear drums and to relieve you of all the garbage that is out there on the internet and radio. This relief comes in the form of the new band Flying Colors. The members are Mike Portnoy (drums, vocals), Neal Morse (keyboards, vocals), Steve Morse (guitar), Dave LaRue (bass) and Casey McPherson (lead vocals). For those of you that are not familiar with the members in this band, everyone has impressive resumes. Mike Portnoy (Dream Theater, Transatlantic, Avenged Sevenfold), Neal Morse (Spock's Beard, Transatlantic, Solo), Steve Morse (Dixie Dregs, Deep Purple, Solo) and Dave LaRue (Dixie Dregs, Steve Morse Band) have a lot in common and are no strangers when it comes to their music and who they have played with. Casey McPherson seems to be the odd man out, but wait: It sounds like he has been with this group of players for quite some time after you listen to the album and he was indeed the perfect fit for this project.

Now you are probably thinking who is Casey McPherson ? I have a feeling once this album catches on, and it will mind you and very quickly, you will be hearing that name more often. One listen to "Kayla" and the range this guy has will serve as a welcome mat to any listener. His sweet yet powerful vocals set the tone for their music. He had an album out for Disney in 2010 titled New Morning that debuted in the Top 5 on two Billboard Charts. He is also from a band called Alpha Rev, and he was recommended by who else but Mike Portnoy. I think Mike should start his own label and hand pick talent, groom them, produce them, and then distribute their albums worldwide. He certainly has a knack for it. He did a lot of that when he was running the Progressive Nation Tours, and very successfully.

This self-titled release has a little bit of everyone in the music which means that stylistically you will hear just about everything. Now think about that for a moment. All the influences and talents of each band member colliding in the studio to bang out 11 tracks of glorious rock' or should I say they are flying their colors. That sounds exciting and it is, every second of it is charged with energy, outstanding musicianship and finely crafted songs ranging from over 3 to 12 minutes. So what you end up hearing is a steaming cauldron of rock, pop, progressive, funk, etc. over the course of this recording. All eleven tracks are excellent. With a lineup such as this that is what you expect but super groups do not always work out very well. I think what you have here is a bunch of ultra-talented guys having fun and allowing the magic to happen without personality or ego issue getting in the way.

You get that kicked back relaxed atmosphere feeling right from the start with "Blue Ocean" when it kicks off with some comfortable studio banter that leads you into the track. LaRue begins it with a 'walk across the floor' bass line that sets the stage. After that song runs its course the realization that you are in for something special takes hold and fortunately never lets go. This is a made for radio hit if I ever heard one but we all know that will never happen because corporate radio has blinders on. "Shoulda Coulda Woulda" is an all out rocker with fat power chords sparking from Morse's guitar then Portnoy and LaRue lay down the juggernaut bottom end that takes it all for a musical rollercoaster ride. What I found a real treat was hearing McPherson sing (he reminded me of Sixx: A.M.'s James Michael) and Neal Morse offering his signature vocals to the mix as well. It turns out to be a very successful partnership and appealing sound that holds firm throughout the run of the CD.

One of the pleasant surprises of the album is Portnoy taking over the lead vocals on "Fool In My Heart". This is a very good track and although Portnoy is no McPherson and never will be, he does a fine job with the song. It actually seems like a perfect fit. Is this a song about himself or someone he knows possibly ? One never knows about these things but in any case it really is an enjoyable track. Fittingly the band ends with the prog rock monster track "Infinite Ride" which takes 12:02 minutes. It leaves you feeling that the more you listen to this music the more it feels like the title of the track. I really hope this is not going to be a one off recording. I mean this is one of the best albums for variety and talent I have heard in quite some time. Yes the self-titled "Flying Colors" is destined to be hailed as a classic right out the gate. It was the great beginning of this exciting band and worth to have in your collection.