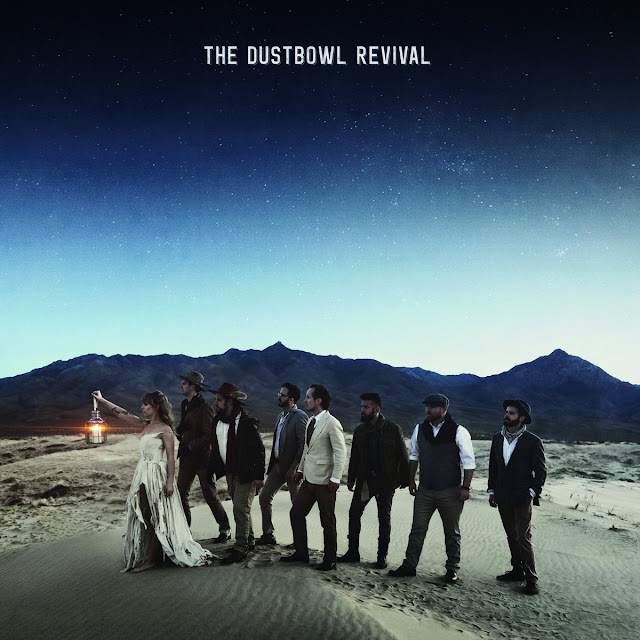 
Over the past few years, The Dustbowl Revival has been making a name for itself with a vibrant mix of vintage Americana sounds. Critics have proclaimed that this eclectic eight-piece would have sounded utterly at home within the hallowed confines of Preservation Hall in New Orleans' French Quarter (Los Angeles Times) and their upbeat, old-school, All-American sonic safaris exemplify everything shows should be: hot, spontaneous, engaging and, best of all, a pleasure to hear (L.A. Weekly). Rob Sheffield, in Rolling Stone, hailed them as a great band whose Americana swing was so fun I went back to see them again the next day. Their new eponymous album, however, finds the Los Angeles-based ensemble evolving and refining its music. Their always-joyous sound now reveals a more soulful, funky side that exudes deeper emotions and taps a more modern vibe.

This exhilarating new sound jumps out on the album’s opening tracks, "Call My Name" and "If You Could See Me Now". Drummer Joshlyn Heffernan and bassist James Klopfleisch lay down a righteous groove that trumpeter Matt Rubin and trombonist Ulf Bjorlin supercharge with their big blasts of horns. This Stax-style soul builds to a pair of showstoppers: "Good Egg" and "The Story". The former is a dynamic number that showcases Liz Beebe’s sexy, full-throttled vocals as well as Bjorlin’s dirty trombone solo. On "The Story", Beebe teams with band founder Zach Lupetin for an emotionally charged love song that features some infectious interplay between the horn players and the string-men (mandolinist Daniel Mark and fiddler Connor Vance). The album’s first single, "Busted", also exemplifies the sonic leap taken by the band. Spotlighted by Beebe’s slinky jazz vocals, the song mixes traditional American music styles, like the blast of R&B horns and the in-the-pocket drums, with some inventive touches, such as a mandolin plucked like a hip-hop inspired piano, and the upright bass and fiddle played through wah-pedals. The group has said that recording “Busted” was like a door opening for them to create something familiar yet stylistically fresh.

Even the album’s more acoustic number, like "Debtors’ Prison" and "Got Over" aren’t as old-timey as they might first appear. "Debtors’ Prison" initially suggests a throwback busker tune, but a closer listen reveals an all-too-contemporary ode with Lupetin singing about the struggles of trying to survive in today’s troubled economic times. Similarly, on "Got Over", Lupetin delivers another modern-day portrait about a scuffed-up soul battling a whirl of problems who winds up sitting on the kitchen floor eating all the ice cream, 2 a.m. on a Tuesday. Things get a little more optimistic on the sunnier, Bill Withers-inspired "Honey I Love You". Featuring a guest spot by multi-Grammy-winner and fellow genre-bender Keb’ Mo’, this track serves up a timeless slice of sweet, silky soul music.

The evolution in the band’s sound has been very much an organic one. Since Signature Sounds released their last album, "With A Lampshade On", The Dustbowl Revival has been out on the road, winning over audiences with their free-flowing, joyous live performances. After playing more than 200 shows a year during the last four years, The Dustbowl Revival came to realize that they had outgrown the confining label of a retro-minded band playing music from a bygone era and needed to move in new directions. To help them achieve their adventurous musical vision, the band turned to the Grammy Award-winning producer Ted Hutt, who brought with him a background of working with a musically diverse set of acts.

It was back in 2007 when Lupetin, a Midwestern transplant to Los Angeles, posted an ad in Craigslist in hopes of creating a group inspired by brass band and string band traditions. Over the years, the group has been an inclusive outfit that frequently shifted in size before solidifying in its current eight-piece lineup. In 2008, Zach Lupetin and The Dustbowl Revival released their debut album, "The Atomic Mushroom Cloud Of Love". They followed up in 2010 with "You Can’t Go Back To The Garden Of Eden", which included "Dan's Jam", a song that won the Independent Music Awards Americana Song of the Year. The next year, the band, now known just as The Dustbowl Revival, put out "Holy Ghost" EP and their 2013 "Carry Me Home" album featured more than 25 Dustbowl Revival-ists. That was also the year the L.A. Weekly crowned them the city’s Best Live Band.

The Dustbowl Revival found a bigger audience when Signature Sounds released With a Lampshade On in 2015. The video for "Never Had To Go", starring band fan Dick Van Dyke, became an Internet sensation. The group went on to open for bands ranging from Lake Street Dive to the Preservation Hall Jazz Band, while also appearing at such festivals as Delfest, Floydfest, Hardly Strictly Bluegrass, and, more recently, Norway’s Bergenfest and Tonderfest in Denmark. This new album reveals the band moving in an exciting new direction. Instead of Dixieland jazz and Depression-era folk songs serving as musical mile markers, this CD mines an energizing vein of soul, funk and roots-infused rock that evokes the work of Fleetwood Mac, Paul Simon, Aretha Franklin and classic Stax recordings, and fits the band alongside such contemporaries as Nathaniel Rateliff & the Night Sweats and St. Paul & The Broken Bones.