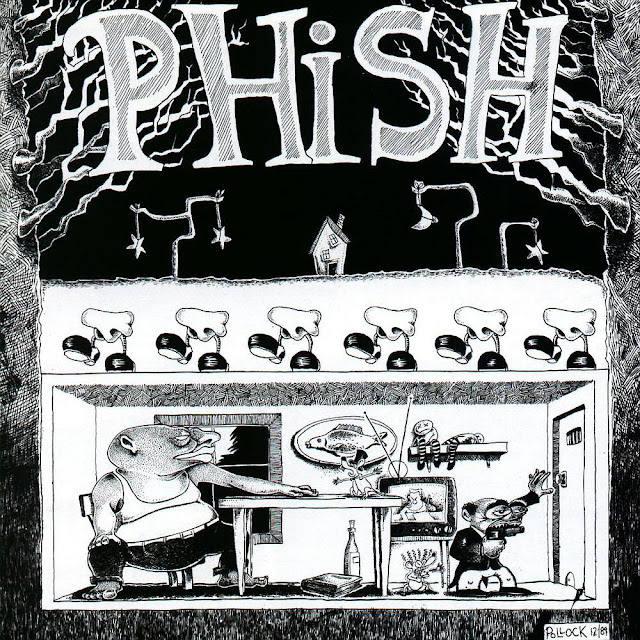 This is the Phish album that you should own first and foremost. Yes it is their first official album and there is a bit of unevenness to it, but it is an excellent example of jazz-rock fusion, an amazing combination of improvisation and structure with the right mix of both. The musicianship is great and the way the band works so well together playing off of each other is most apparent in this album out of all of their studio albums. This is also the most progressive album that they released, with great mood shifting and rhythm stretching tracks that any prog band would be proud of.

There were a few issues of this album, the original having 11 tracks (ending with "Contact") for the original cassette version. The CD version became a double CD set and three tracks were added because of the ample space remaining. Those 3 tracks are live tracks, and personally I liked the album without the bonus tracks. It was the right length and the live tracks have a questionable quality, with the 25-minute jam fest "Southern Pacific" being a good example of what to expect at a Phish live show, but there are better live albums that demonstrate that, so to me, the bonus tracks are more of a distraction. So I don't take those tracks into consideration when giving my final rating for this album since I didn't hear them for quite some time after I first got this amazing album. There is a lot of nonsensical lyrics in this album, some of them actually written by band members when they were attending school and were quite young. But it's all good because the music is definitely mature and at top quality, so if you aren't bothered by the sometimes silly and lacking lyrics, then you won't have a problem with this. There is a surprising amount of piano in the mix, which is very refreshing and lends itself well to the fusion sound of the music.

"Fee" is rather straightforward rock with a very funny story line. Listen closely and you'll hear a story that sounds like it's taken from a soap opera of sorts, albeit a rather warped soap opera that uses a piece of paper as a murder weapon. The next track is a great example of the genius that you'll find throughout this album called "You Enjoy Myself" and is mostly instrumental except for a few words that appear deep into the track. This is a very good example of structure working with improv and it has some amazing prog elements all through the track. This one goes over 9 minutes and it is a very welcome and enjoyable 9 minutes. The following track also lasts 9 minutes, but there are a lot of lyrics to this one called "Esther" because it is more story based like "Fee" was, but this time the music is ever changing and not so straightforward. The story is very funny even though the humor is quite warped and some might consider a strange horror story about a possessed puppet and a little girl. I love how they barely escape a pack of joggers.

"Golgi Apparatus" has a very tricky reggae inspired hook which sounds like it is under the influence of prog with some scientific jargon mixed up with ridiculous lyrics which will leave you wondering what a ticket stub has to do with anything. "Foam" is based on a rhumba format which ends up getting very complex. "Dinner and a Movie" has simple repeating lyrics but a complex crazily changing rhythm, it is short compared to the other tracks. Just because it's short doesn't mean it's radio friendly. Mostly silliness here.

Following this are two excellent show stopper tracks, both over 10 minutes long. "The Divided Sky" is my favorite track on here and one of my favorite Phish tracks. It is a very bright song with some great structure mixed with improv spanning the entire piece, again with an abundance of prog elements and excellent fusion. The harmonies in the very short vocal section are beautiful, but the instrumentals immediately take away the beauty and become very dissonant. But the tune builds and shifts and becomes an amazing piece of work with great build ups and climaxes throughout. You almost hate to hear it end, but then the track "David Bowie" starts, and follows a similar formula. This one consists of the lyrics "David Bowie" repeated several times for the first verse and then "UB40" repeated for the 2nd verse. Don't ask. It doesn't last long though and then it goes into a long instrumental for the rest of the track which is similar to the preceding track, except this on is louder, at times more dissonant and has an amazing build and release pattern that will leave you breathless by the ending.

"Fluffhead" is a satirical short song that makes fun of psychedelic drug songs with some silly lyrics, but it segues into a suite based on that motif called "Fluff's Travels". This is again another great track with multiple themes and movements and a few lyrics. The themes are more pronounced here than in the previous tracks in that the division of the movements are somewhat pronounced even though the music does not interrupt itself. The last track is a return to a more straightforward song called "Contact" which is a simple and silly song about the tires on your car. The final punchline is the added kids chorus at the end.

Yes I love this album and this band. Even though their discography hasn't always been consistent, when they do hit it right, they do it very well. They had a few not so great albums through their career in their attempt to expand their audience, but they always come back to their signature style when it comes to their best albums and their live performances. They also have some other amazing albums, but this one is their most progressive (probably with "The Story of a Ghost" and "A Picture of Nectar" being their next most progressive), but for the most part, they are a prog related band. I would recommend this album to prog lovers first though, because those not into progressive music might not understand it as well on the first listen. I consider it a masterpiece especially because it is an excellent example of structure vs. improvisation in long song formats and also a very good fusion style album even if the lyrics are silly.