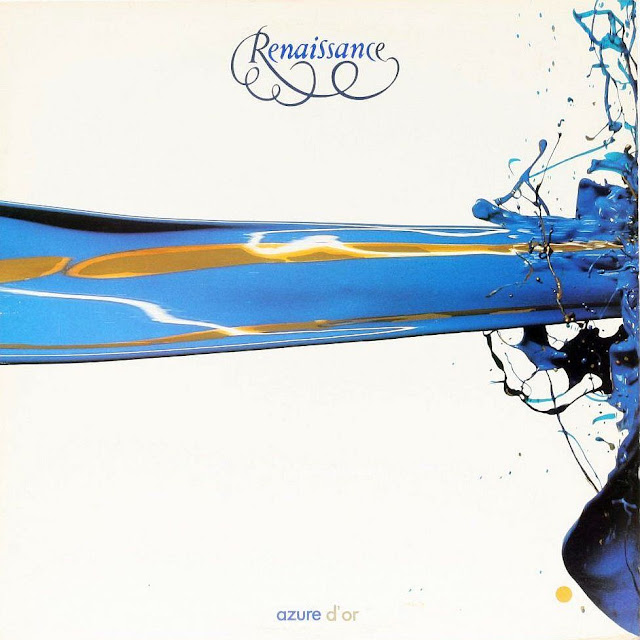 Given the number of early progressive bands who had either disappeared or simply gone over to the AOR darkside by the late seventies (or in the case of Genesis gone full-frontal pop), Renaissance fans should have been happy the group was at least sticking somewhat close to their unique brand of 'classical folk' by this point. And for the most part it seems fans were still engaged, as the album charted and sold respectably though much of that was likely momentum from their 1978 hit single "Northern Lights" which was still getting significant airplay by the time "Azure d'Or" released in the summer of 1979. While the key players are the same ones who cranked out the previous few Renaissance albums, there are several changes that are rather hard to miss on this album. The most significant is the considerable tightening up of arrangements resulting in much shorter songs than nearly anything in their repertoire at the time (only one song tops five minutes, and that one not by much). This means that nearly all the lengthy classically-arranged instrumental passages that characterized much of the band's history are gone.

Once exception is an energetic but brief "The Discovery", a rare instrumental song from a band whose very identity is inexorably tied to its iconic lead singer as much as or more so than its instrumentation. Instead producer David Hentschel elected to take what could have been sequential piano, synthesizer, guitar and percussion tracks and simply layer them all on top of each other to achieve a sort of ivy-covered 'wall of sound'. As an aside, Phil Spector of course pretty much invented the Wall of Sound concept back in the sixties and tried to employ it in George Harrison's 'All Things Must Pass' sessions before Harrison fired him for showing up drunk in the studio. A young Hentschel was sound engineer for many of those sessions. He also played synthesizers on Elton John's 'Goodbye Yellow Brick Road', the very symbol of ostentatious seventies overproduction, so I suppose it's no surprise he felt the urge to do the same here.

Another big change is the emergence of bassist Jon Camp and drummer Terence Sullivan as songwriters. Between them they wrote half the songs on the album, easily eclipsing their combined efforts on all the earlier Renaissance albums. And Camp took things one step further by penning his own lyrics rather than relying on the group's stalwart lyricist Betty Thatcher (who still managed to deliver the words to four of Michael Dunford's five songs). And in one of the most noticeable changes the rock band that had risen to fame with only acoustic guitar had now plugged in with both Camp and Dunford playing electric guitars (sometimes simultaneously) and keyboardist John Tout spending more time hunched over his synthesizers and organ than at the piano, which results in more rock-based compositions that tend to use the band's classical passages as window dressing rather than the basis for their sound. Despite all the changes this is still a very solid album, and is perhaps one of the better examples of a progressive band adapting to the changing times without completely selling their souls. For the most part at least.

The opening "Jekyll and Hyde" can be a bit jarring to anyone who had recently spun a classic Renaissance record before playing this one, as the synthesized orchestral sounds and swirling organ bleats all but drown out the bits of piano that one would normally expect on a Renaissance record. Annie Haslam's vocals are as potent as ever though and despite the slightly New-Wavey rhythm this is unmistakably a Renaissance song with a fresh coat of paint much like the Moody Blues would attempt with their 'Long Distance Voyager' release just a couple years later. "Only Angels Have Wings" recalls the band's folk roots with its soft Haslam/Camp vocals and jaunty, almost baroque synthesized strings and woodwind sounds, Camp taking what amounts to the lead vocal role in a rare turn for the group. This became one of only two singles for the album along with "Jekyll and Hyde". Tout returns to his piano for "Golden Key" as Haslam demonstrates her vocal range on a song with a satin sheen of studio production that carries over to the Sullivan-penned "Forever Changing", a ballad-like number with Dunford on acoustic guitar and what amounts to something akin to a "Northern Lights Part 2". This is a beautiful tune thanks mostly to Dunford's strumming and fingering and one that has been underappreciated over the years in the Renaissance catalog.

On the other hand other than the delightful instrumental "The Discovery" the second half of the album is a bit weaker and much more commercial than the first. "Secret Mission" suffers from a rushed tempo that barely allows Haslam to breathe, and despite the tasty guitar work "Kalynda (A Magical Isle)" becomes an exercise in synthesized noodling and what amounts to a duet between Haslam and Camp, while "Friends" works in completely superfluous choral backing and a funky bass line that relegates the song's lyrics to the 'too sappy' bin. This is one song the band could have salvaged and possibly even turned into a strong offering with some well-placed piano, a slower pace and perhaps switching out the lead bass with more of Dunford's bucolic acoustic guitar.

And finally "The Flood at Lyons" closes the album, which for the first time in Renaissance's history is a closing song that doesn't approach epic stature in either length or depth. Once again the pace is too rushed and the rhythm tries too hard to be catchy rather than majestic. The layered fake orchestral and choral sounds are most noticeably out-of-place here, and I've been tempted to break out some editing software to stretch this thing out and give it some room to develop the way it should have been recorded in the first place. Once again Haslam's vocals salvage the thing, but just barely.

The first time I listened to this record I expected a glossy, overproduced bit of schlock along the lines of what just about every other progressive dinosaur was cranking out by the late seventies. "Azure d'Or" isn't quite that, but the lack of restraint shown by Hentschel on the latter part of the record puts it dangerously close to that category. This ends up being a decent record, mostly on the strength of "The Discovery", "Only Angels Have Wings" and "Forever Changing". That makes it a three star effort, not among the strongest Renaissance albums but given the times still a pretty good one.