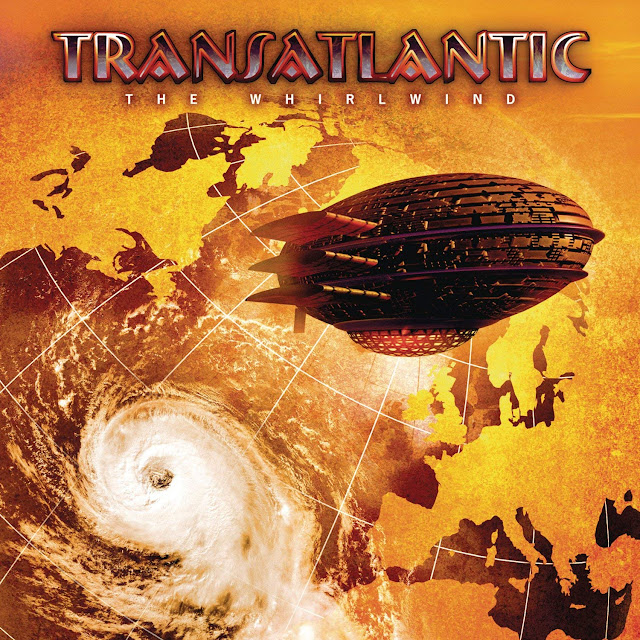 I've always considered Transatlantic to be one of the greatest (if not the greatest) supergroup in the history of prog. Their first two albums were excellent, and everything I could dream of. Come on, what's better than a supergroup made up from the mastermind Neal Morse, the crazy drumming of Mike Portnoy, the great basslines of Pete Trewavas, and the guitar heroics of Roine Stolt ? Not much at all in my opinion. So you can only imagine how thrilled I was when I heard they were getting back together to create a 77-minute epic concept album. I was not at all disappointed when I first heard this album. It was everything I'd hoped for, and a lot more. This is pure perfection from beginning to end, and there is no other way I can describe it. From the incredible overture opening to the epic ending, this album takes you on a journey and is one of the best albums released in the past 3 years. So what makes this album so great ?

Well, it's really a combination of things. To hear such excellent musicians finally play together again is really great. The chemistry between the musicians is clearly there, and I've always thought that they've played together perfectly. This is also the most balanced Transatlantic album to date, and this definitely features more equal participation from each band member. While I think the first two albums are excellent albums regardless of this aspect, this doesn't sound as much like a Neal Morse solo project anymore. While it is obvious that Neal and Roine do impact the overall sound of the band the most, this features more lead parts from Pete, and Mike Portnoy has a few lead vocal sections as well (don't worry, he doesn't growl). In addition to that, Transatlantic has always been excellent at creating excellent prog-rock epics. Songs like "All of The Above", "Duel With The Devil" and "Stranger in Your Soul" are some of the best 20+ minute songs I've ever heard, so a 77 minute epic works absolutely perfectly for them. The overture is one of the best I've heard, and the bombastic ending doesn't disappoint either. Everything in between has a perfect blend of emotions, beautiful melodies, and excellent soloing. Now on to the track-by-track review.

"Overture/Whirlwind"- The opening to this concept album begins with some light sound effects and a repeated voice. Soon, some light horns come in playing the main theme to the album. A string riff goes into one of the main themes played by a synth. The overture is incredible, having everything a good overture needs. It covers all of the themes it should cover, and has some great moments. After some uplifting organ chords and a great bassline, the first vocals of the album enter. They are surprisingly enough Roine Stolt's, and Neal Morse's soon follow into the catchy chorus. This is a noteworthy opening that should be recognized as one of the strongest in prog rock. "The Wind Blew Them All Away"- The previous song flows right into the second track on this epic album. An acoustic guitar riff opens it up, and Neal's vocals soon follow. It has a kind-of ominous feeling to it, and it definitely sounds like something that could come from a Neal Morse solo album, particularly Testimony. It has a great guitar solo shortly before the middle of the song, as well as one towards the end that incorporates one of the main themes into it.

The third song "On The Prowl" opens with an excellent bassline. Soon the drums, keyboards, and guitars enter. It starts as sort of a jazz fusion jam-session, but it soon evolves into a prog rock song. It has a heavy verse, and a great chorus. It has frequent use of the organ, and it really adds another layer to the music. A great song. "A Man Can Feel" has a short little heavy intro. After the brief opening, a majestic harpsichord chord progression enters. Roine's vocals here are very creepy and mysterious. The chorus is very catchy that soon enters. The Mellotron chord progression that follows reprises the mysterious opening, and it is very effective. The instrumental section near the end is very strong, and it has a few moments (around 5 minutes in) that could have clearly come from an album by The Flower Kings. "Out of The Night" comes after the ambitious instrumental section that concluded the previous track, this is a lighthearted track that reminds me a lot of The Beatles. This features many vocal tradeoffs, and Mike Portnoy actually has a lead vocal part (and again, don't worry- he's not growling on a Transatlantic album). Some strong acoustic sections, musical reprises, a great outro, and beautiful melodies make this relatively straightforward track one of my favorites actually.

After the climax at the end of the previous song, "Rose Colored Glasses" is a light acoustic melody with Neal Morse singing. This just screams solo Neal Morse left and right, but it is still a great track, with many memorable melodies. After the bridge there is a reprise of the main theme to the album, and it works perfectly. There are some classic Roine Stolt guitar moments is here, and he definitely does a great job with the guitar solo. The seventh song "Evermore" opens up with a cool piano progression. There are a couple of riffs from the bass, guitar, drums, and piano that contrast the airy chord progression. It soon turns into a steady beat, and then the riff changes into an excellent section with a great bassline. When the vocals enter it sounds very similar to The Flower Kings, and that is not a bad thing. It has some hintings towards the song "Is It Really Happening ?" near the end of the song. "Set Us Free" opens up with one of the main themes to the album, and I absolutely love the sound of the synths in contrast to the rest of the band here. Soon a rhythmic electric piano, bassline, and drum beat enter. Neal Morse's vocals are the first to enter. After that Mike Portnoy has the lead vocal part again. His vocal melody reminds me of the song "Frequency" by IQ every time, but by the second or third measure the melody changes. I love the chorus to this song as well.

A low string melody begins the song "Lay Down Your Life", and it reminds me of something off of Neal Morse's "Testimony" album. It has a kind of symphonic hard rock feeling to it, and it has some Flower King overtones. The chorus is pretty strong, and it can manage to get stuck in my head for days. This is a pretty standard verse-chorus-verse song. A complex organ and harpsichord rhythm open up the third to last track "Pieces of Heaven". This song is entirely instrumental, and builds off of the same theme for the majority of the song. "Is It Really Happening ?" This opens up with a very Flower King-ish piano scale that soon ends and sound effects enter. A vocal melody continuously builds without the listener really realizing it's happening (pun intended). It builds into one of he greatest instrumental sections I've ever heard. An excellent guitar solo from Roine is everything I could wish for in a solo, as the rest of the band is going frantic (just listen to Portnoy here). The guitar solo progresses into some wonderful riffs, until we reach the climax of the song. The song completely changes key signature, and a synth line enters. The synth line changes slightly, and guitars play the same riff along with it. It just keeps getting faster and faster until we're at light speed This is the closest the album gets to prog metal, and let me just say it is awesome. This song is superb, and the instrumental section near the end is one of the best I've ever heard, and is a great way to go into the emotional closing piece.

A light piano melody opens the suite "Dancing With Eternal Glory/Whirlwind (Reprise)". It progresses into one of the main themes on the album. Neal sings this section beautifully, and I do find his voice to be terribly underrated. He does an excellent job especially in the beautiful chorus. I love the strings applied to this section, and it truly is excellent. There is a point where I can't even describe such magnificence with words. You just need to hear it. A great guitar solo transitions into the theme from "A Man Can Feel", and it works perfectly back into the main theme to the album. All in all, this epic conclusion sums up everything in the album absolutely perfectly, and there is no flaw here. This is one of the greatest (if not the greatest) endings I've ever heard to such an epic piece of music. This is what all musicians should model their endings to an album like, because it doesn't get any better than this. I think I've made my point clear by now. This album is a masterpiece that should be heard by anyone who even remotely likes progressive rock. We all had some doubts about creating a 77-minute album, but Transatlantic pulled it off with ease. These musicians work so well together musically, and it really shows in this epic concept album.