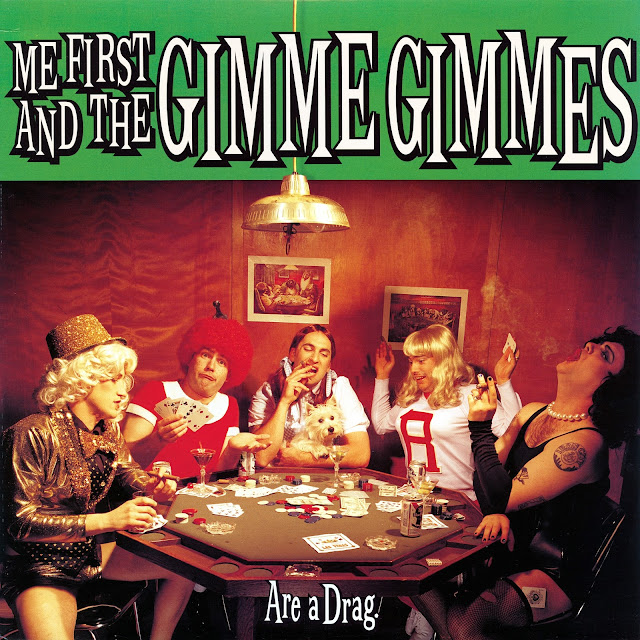 Me First and the Gimme Gimmes (often shortened to just 'Me First' or 'The Gimmes') are a punk rock supergroup and cover band that formed in San Francisco in 1995. The Gimmes work exclusively as a cover band. They specialize in rapid-fire punk interpretations of a wide range of songs, often with a humorous edge. The band is named after a children's book of the same name by Gerald G. Jampolsky and Diane V. Cirincione. The band's first release came with 1995's Denver, a 7" single released on band member Fat Mike's record label Fat Wreck Chords, featuring two John Denver covers. The band released four more singles in 1996 and 1997, each on a different label and named after the artist covered on that particular release, as well as some compilation appearances. Their first full-length album, "Have A Ball", was released July 29, 1997. Each album by the band has a different theme: "Have A Ball" focuses on classic 1960s, 1970s, and early 1980s songs by singer and classic songwriters like Elton John, Neil Diamond, and John Denver; the second album "Are A Drag" consists entirely of show tunes.

The album's title alludes to the fact that most of the songs on the album feature vocalist Spike Slawson singing songs that were originally performed by female characters in their original stage shows/movies (with the exception of the Phantom's part in "Phantom of the Opera", "Science Fiction/Double Feature" which was sung by a female traditionally, but more popularly by Richard O'Brien in The Rocky Horror Picture Show, and "Rainbow Connection"). The album's cover features the members of the band dressed up, in drag, as five characters from the musicals represented in song: a member of A Chorus Line ("What I Did For Love"), Annie Mudge from Annie ("Tomorrow"), Dorothy Gale from The Wizard of Oz ("Over the Rainbow"), Sandy Dumbrowski from Grease ("It's Raining on Prom Night"), and Dr. Frank-N-Furter from The Rocky Horror Show ("Science Fiction/Double Feature"). Like many other Gimme Gimmes albums, "Are A Drag" contains many elements of mash-up - more specifically, musical allusions to punk or power-pop songs in their covers. The intro to the song "My Favorite Things" quotes "Generator", by Bad Religion, and at the end of "Tomorrow", Fat Mike can be heard singing "Mommy's alright, daddy's alright, they just seem a little weird" - a lyric from "Surrender" by Cheap Trick.

Their third album "Blow in the Wind" consists of 60s classics; the follower "Take a Break" of contemporary R&B songs (by artists such as Boyz 2 Men, Lionel Richie, and Vanessa L. Williams). Their fifth album "Ruin Jonny's Bar Mitzvah" (recorded live at a bar mitzvah) consists of pop music from the 1960s through the 1980s by artists such as REO Speedwagon, Styx and The Beatles, as well as traditional songs like "Hava Nagila". The compilation album "Have Another Ball!" features 60's-80's classics. The band entered the studio on April 3, 2006 to work on their sixth album, "Love Their Country", which was released on October 17, 2006. The theme of this album is country and western, and includes covers of tracks by Dixie Chicks, Garth Brooks, Hank Williams, Sr. and Johnny Cash. Prior to the release of the album, Fat Wreck Chords released a digital label sampler, "iFloyd" which included "(Ghost) Riders in the Sky" by the band.

In late 2006, Fat Wreck Chords released another digital label sampler "Christmas Bonus", containing a previously-unreleased cover of Steve Goodman's "City of New Orleans". In August 2006 Me First and the Gimme Gimmes were scheduled to play three dates at PNC Park after Pirates games, but after they got booed on the first night, the next two nights were cancelled. They were to play along with fireworks during the post-game "Skyblast" shows. On December 5, 2007, Fat Wreck Chords released a flash MP3 holiday bonus sampler called Hanuk-Comp containing "The Boxer", originally released on the 1997 Garf single. There is also a downloadable podcast that features commentary from Fat Mike and Floyd during breaks between songs in which the next album is revealed. The compilation "Have Another Ball!" was released on July 8, 2008; it comprises all the B-side recordings from the Have a Ball singles, plus covers of "Sodomy" (from Hair) and Diana Ross's "Theme from Mahogany (Do You Know Where You're Going To)".