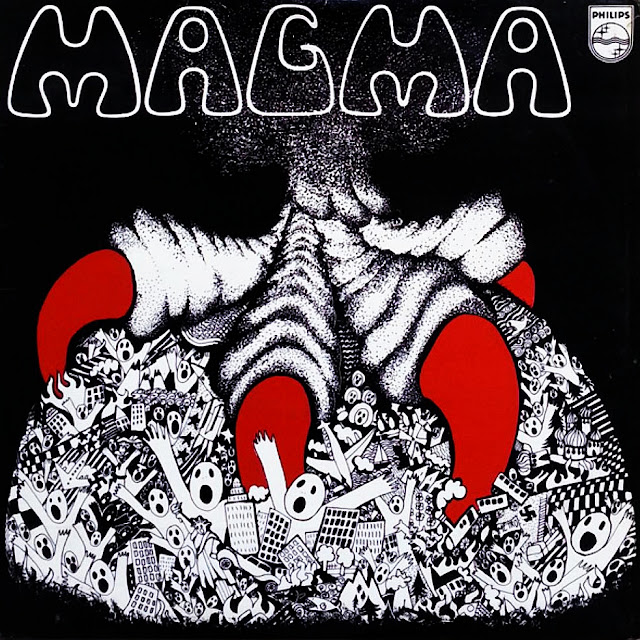 Magma is a progressive group led by drummer, composer and vocalist Christian Vander that has been active in the classic perio' and in the 21th century. The music of Magma is often categorized as 'Zeuhl' (which means 'celestical' of 'heavenly' in Kobaïan, Magma's own language). The band doesn't clearly fit in any other progressive subgenre, though avant-prog would qualify. Swirling riffs in odd time signatures, theatrical choir arrangements, heavy and distorted pulsing bass guitar, bombastic and minimalistic (sometimes both at the same time), dark and brooming, adventurous and angelic, jazzy or classical, but always with the highly innovative and original drums of founder and main composer Christian Vander. The music of Magma is adopted by the progressive rock movement, though even for progressive standards it is very hard to get into because of its other worldly sound and its extended compositions of often more then thirty minutes. The band has had almost no connection whatsoever with other bands of the progressive genre, though in France it would prove to be a big inspiration for other Fusion and Zeuhl bands. It is often though that the modern classical music of Carl Orff (for instance "Carmina Burana") must have been a big influence to Magma.

Vander himself has claimed on several occasions that his main influence was the jazz saxophone player John Coltrane, and listening to Coltrane's version of "My Favourite Things" we do find a hint to what was to become the Zeuhl genre. Legend goes that Magma was formed after a vision that was revealed in a dream of Christian Vander about a spiritual and ecological future for mankind. This vision would influence the three different multi-part saga's, namely the Kobaïan saga (as hearing on this Debut Album and the follow-up "1001 Centigrades"), the "Köhntarkös"z triology (Kohntarkosz Anteria or simply "K.A.", "Köhntarkösz" and "Ëmëhntëhtt-Ré") and the Theusz Hamtaahk triology ("Theusz Hamtaahk", "Mekanïk Destruktïw Kommandöh" or simply "M.D.K" and "Wurdah Ïtah"). The third studio-album of Magma, "M.D.K." is often seen as the genre defining Zeuhl album, whereas the first two Magma albums have stronger jazzrock fusion leanings and less Orffian choir arrangements.

Being heavily disturbed by his vision, classically trained drummer and composer Christian Vander formed the first version of Magma in 1969 in Paris as a means to give musical expression to his fears for humanity. With a small list of fusion and rhythm and blues musicians, among them some wind-players and one of Magma's main vocalists; Klaus Blasquiz, the band created a double concept album heavenly drenched in fusion, avant-prog and modern classical music. In order to be fully capable of expressing the artistic vision of the band all lyrics were written in Kobaïan. Vander would later state that "when I wrote, the sounds of Kobaïan came naturally with it - I didn't intellectualize the process by saying "Ok, now I'm going to write some words in a particular language", it was really sounds that were coming at the same time as the music." The debut album would tell the story of a group of earthlings that start a new civilization on the planet Kobaia in order to be able to live in harmony with nature whilst using advanced technology. The second halve of the record tells of a rescue of an earth space vessel. The saved earthlings are amazed at by the Kobaïan society and ask for help in order to save planet earth, which by that time is plagued by man-made disasters that threaten the survival of the planet. The Kobaïans decide, after some discussion, to send a small party to accompany the earthlings back home.

Much as writers in Rolling Stone and the dying breed of punk fans may accuse Jon Anderson's astral wailings and vague concepts, Gabriel's William-Burroughs-writes-nursery-rhymes lyrics and Peter Hammill's existential musings of being pretentious and irrelevant, they have, sadly enough, no idea of how pretentious human beings can be. For instance, they've probably never heard Magma; Magma's entire career (with the exception of the moderately hilarious "Call From The Dark (Ooh Ooh Baby)", takes the astral biscuit of ethereal Vauncah and devours it whole. The band's theme is a vague (exception: this album ?) space opera sung in some form of bastardised Anglo-Russo-German because real languages are not worthy of the vague, often to the point of indecipherable, story. Really, next time you feel like venting venom on the comparatively earthy and humble Emerson, Lake & Palmer, please take a moment to remember that you would be devaluing the whole idea of pretentiousness. However, if you ever need to be reminded that pretentiousness can have positive side-effects, Magma will do that. I have not heard more confidence in music outside the realm of classical: Magma are willing to leave themes hanging, to drop out for a moment, to incorporate genuine classical ideas, to build tension without respite, they don't feel obliged to wait for the listener: the sheer confidence that comes through about what they can do with their music should impress if nothing else. This first release has that confidence, though it's entirely different to their later ones, aside from a much more jazz-oriented ensemble, the double-album format, the avant-garde nature usually appears to be drawn from classical or free-jazz inspiration (Christian Vander, drummer and mystic prince of the space-people, was, after all, classically trained) rather than the truly ground-breaking psychosis of, say, "M.D.K.".

In some ways, I think this album will be much more accessible than its followers, even if it gives less of an idea of what the whole outfit is about; in some ways, it is perhaps more enjoyable, and the calibre of the musicians gathered and the writing is . The opener "Kobaia" is probably the strongest statement of the album, with an opportunity for most of the ensemble to stretch out a bit, ambitious structure, an awesome free jazz-styled guitar solo, a neat bass riff and a soul-crushing piano and vocal break. Thereafter, the album tends to be a bit more standardised, although nonetheless excellent; while "Aina" is incredibly creative in terms of melodies and a very tight piece of classically-influenced (listen to Teddy Lasry's wonderful flute flourish) jazz work, it doesn't really quite hit any particular moods as powerfully. "Malaria" is fairly similar in terms of impact, and is similarly well-arranged as a mostly jazz piece with some sweeping electric guitar and an unusual vocal. More of a departure is the first piece not penned by Vander, Teddy Lasry's "Sohia" (though I think for everything the band has as large a role in constructing stuff as the writer). This is a rather odder piece, where Francis Moze's bass-work underscores some haunting classical-ish flute harmonies, before the jazz band comes back. Vander's fills (the man is really a very talented drummer, here supported by a very talented bassist) here are perhaps the closest the album gets to the territory of rock, while Richard Raux's saxophone neatly expands themes in the harmonies. It sort of continues the strange internal logic of the album, and even the more solo-based bits. The incredible winding flute-and-piano spiralling around the guitar towards the end and the militaristic outro are certainly some of the most absorbing moments on the album.

Another non-Vander piece ("Sckxyss", for those of us with paranormal gifts for pronunciation), this time by pianist Francois Cahen, who takes a solid riff under which the song grooves and pulses frantically in between schizophrenic breaks. Francis Moze's electric bass is very powerful indeed, the sax interplay is insane. Cahen's classically crisp piano parts tend to keep the album together and connected, and no exception is the segue between this and the final piece of disc one, Vander's "Aurae". "Aurae" seems to take the classical inspirations further than they have yet gone, with a flute melody underlined by Claude Engel's very bizarre electric guitar and some sort of perverse waltz switching into the blaring declarations of intent. We see the first glimpses of the more symphonic ambitions of "M.D.K." here with the various distorted or cleverly harmonized vocals, as well as the characteristic blocks of classical ambition. It also suggests some of the unique merits of this album: the variety is wider than anything "M.D.K." will really achieve, more melodic writing, cleaner guitar and a more or less unintrusive display of the unbridled originality that will give Magma their generally well-earned cult status.

Part two doesn't quite live up to the writing quality of the first side, I think, though it includes some very unusual content for Magma - yes, voyageurs, producer Laurent Thibault's "Nau Ektila" frequently verges on folk and includes a straight rock guitar solo, much as the whole piece has a berserk centre, the combination and diversity makes it one of the best here, by contrast, "Stoah" is a psychotic high-pitched chant (the vocals here are very diverse) rolling into free jazz and some rather odd attempts at mock-national music mixed with heavy use of sound effects and a couple of pleasantly unexpected pastoral breaks. Without meaning to exhaust all the tracks here, I think it's fair to say that this side more or less sets the style for future Magma releases, albeit with more classical instrumentation and more distinct leads all in all, I think side two is perhaps a touch weaker musically than side one, though I think it deserves credit for the drama and storytelling it includes (if you don't get it at first, I recommend taking a stab at the very simple French sleeve-notes with some sort of online dictionary), though it still contains a lot of very exceptional stuff.

While not really comparable to its followers, Magma's debut album is a very fine album indeed. The rhythm section is incredible, there is no questioning the ability of any of the performers and the writing just about always satisfying in one sense or another; and the concept is used in a ridiculous but basically entertaining way. Moreover, the writing is versatile and accomplished enough to make most of the tracks stand out. I'd note "Thaud Zaia" as a bit of a non-event, much as it has a neat mysterious flute. Best notes for a very, very accomplished debut with a bit more deflation and variety than its more intense successors. Worth having. My favourite Tracks are "Kobaia" and "Sohia". Great album for every collection.