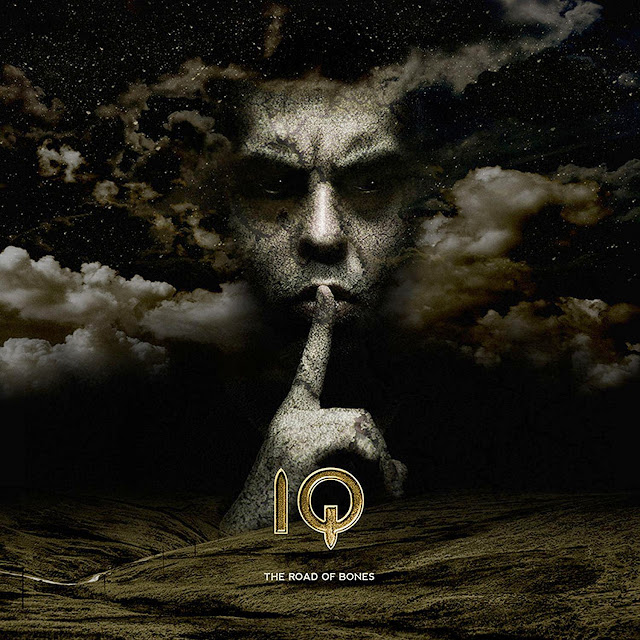 For all its worth, any IQ album is subject to a vast array of opinions, going from masterpiece to I don't get it, an entirely understandable state of affairs when considering the pioneering legacy this band continues to enjoy. Yup, we all know the story, they were part of the heroic resistance to the impending disappearance of prog in 1977, when 'vanilla' punk ruled the hypocritical waves. Along with Marillion, Pallas, Twelfth Night and Pendragon, IQ forged ahead in the vast darkness. Each subsequent album has made an impact on the expectations from these wily veterans and releases such as Ever, The Seventh House, Dark Matter and Frequency have injected pride and passion into the flourishing scene, giving the lesser known bands a new source of inspiration and drive. Music for music's sake. The departure of the visually delightful master bassist John Jowitt, original keyboard virtuoso Martin Orford and drummer Andy Edwards did not really affect the sound all that much as new faces and old hats are now in the fold (Tim Esau and Paul Cook are back from their sabbatical). It seems that, like it or not, guitarist Mike Holmes remains the man responsible for the overall IQ sound and Peter Nicholls just stamps the lyrics with his theatrical voice. They also seem to take their time in getting new material done in a fashion that will keep old fans happy while seducing a new audience.

Neo-Prog, for all its opinionated shortcomings, has never produced more gems than in the last 10 years, a sub-genre that has been killing it with superlative new groups (Silhouette, Galahad, Anubis, Sylvan, Comedy of Errors, Magenta, Final Conflict, Shamall, Vienna Circle and a slew of others). Every day seems to announce a new arrival from France, Italy, Holland, Germany, Sweden, Chile, Argentina, Brazil, Norway and beyond. So, in all fairness to others, IQ are the shining light that keeps the prog road illuminated, intelligent music woven by supreme talents who have a peculiar vision of their sound, yet constantly look to reinvent themselves. That alone warrants the loftiest praise. Like most avid fans, I have opted for the 2 CD version (the more music, the merrier) and everything expected is reached in spades, with a package that will have fans and critics all caught up in their own personal interpretations, slicing, dicing and otherwise finding whatever they are looking for in a prog album. Yes, the mood reflects the somber cover artwork, a mist of swirling greys with an understood melancholic gloom that may appear out of nowhere, unexpected. Neil Durant is the main architect of creative keyboard work that sees little interest in technical prowess, completely subservient to the crew and their arrangement.

CD 1 - "From the Outside In" intros with a Bela Lugosi accented "Children of the Night" and subsequent steamroller assault on the senses, crisp, heavy and actually closer to recent Galahad. From the opening chords, the mighty Mellotron has opted for the much vaunted choir option, (a personal longtime favorite) and it has not shirked its omnipotent desire to dominate the aural landscape. Paul Cook's marshaling beats show off quasi Led Zeppelin- like propulsion, nasty and lethal explosions of tectonic shock, Esau pulling menacingly on his basso profundo. There is little doubt that this piece has extraordinary 'live in concert' credentials, not just for its manifest bombast but also for its explicit winks at "the Lamb Lies Down on Broadway" cinematographic soundtrack. There is a gleaming metallic sheen here as well as elsewhere on the 2CD collection that should be obvious to any cursory listener. If there ever was a perfect IQ song (and there are many in the back catalog), the glorious title track would certainly fit the billing. It has a modern sheen, in that the keyboards have a most definite electro-glitter with a weighty beat and a grandiloquent presence, driving a metallic spike into the Neo-prog formula, a particular attention to forging stunning melodies adorned with twinkling orchestrations. The main theme is typical of the IQ veneration for colossal memorability, with a cute nod at Peter Murphy's classic "Indigo Eyes" there is a repetitive marimba/calypso keyboard tone that will corrupt any indifference and induce immediate 'kneeling at the shrine' hypnosis. The massed guitar onslaught, engined forward by that titanic Mellotron orchestration is a thing of beauty. This is progressive rock hit material. I could listen to these 8 and a half minutes on endless loop and repeat.

IQ have crafted a loyal companion to their colossal epic "Harvest of Souls" off the Dark Matter album, though this 19 minute+ "Without Walls" may offer up more excitation than one could hope for, cool breeze drumming, sounding almost like a beat box combine with dense Led Zeppelin "Kashmir"-like atmospherics and majestic squalls of contrasts, a universe of salivating organ and a snarling Rottweiler guitar tirade. Nicholls howls with unabashed despondence, floating redolence and total confidence. Obviously, there needs to be many returns here to fully grasp the density and despair but that's what makes epics so gratifying, they keep revealing new details, such as the short "The Knife"-like take-off that winked at me and the sudden jangly guitar arpeggios a few seconds later, the rambling Hammond urging on explosion and the delirium inducing outro, thinking that the piece is over. Durant then flips on his switches and toys with his synths, giving another round to the microphone man. Beautiful, by any prog standard! Teacher, please don't leave us kids alone!

"Ocean" took a long time for me to appreciate, as this and the following piece seemed to get caught in some invisible net. Fragile, puerile, bucolic, pastoral, it's actually a song in its purest form. In fact, I find myself comparing this to a Howard Jones/Naked Eyes/Thompson Twins electro-pop ballad. Truth is I am starting to really enjoy this track but it has been a slow-burner. We end the first installment with the underwhelming "Until the End", a cosmetic hodgepodge of altering nuances, a dozen minutes of intransigent drama laced with booming bass in overt Rutherfordian upper cut, tortured synthesizer punching and careening guitar jabs. The gritty song is initially a struggle in its performance and therefore in its acceptance but again, repeated returns have peeled off layers of tear-inducing onion, only to discover the underlying quality of the musicianship and the singing.

CD 2 - As correctly stated by numerous previous observers, this second CD is as tasty, if not more so than the glittering first one, a real double whammy treat for the fan, the band was obviously inspired by all the "remue-ménage" going on between members leaving and old vets returning to the fold. I guess the term 'musical chairs' has never been more appropriate. The brash "Knucklehead" blasts with serpent-like conviction, massive dollops of buttery choir and violin Mellotron cater to the sonic buffet, with enough twists and turns to keep us proggers on our tippy-toes. "1312 Overture" is studiously more orchestral than anything remotely neo-prog, a perfect example of how rock music can be 'classicalized' and satisfy the most irascible fan. It is a humorous and clever wink at Piotr Tchaikovsky's classic "1812 Overture", a piece depicting Russia's defiant defense from Napoleon's conquering Grande Armee. It has an obvious military tone to it, complete with cannonade fireworks, howling winter-like Choir Mellotron and gentle yet abject surrender.

The cinematographic splendor of "Constellations" is perhaps the most terrifyingly accurate IQ song ever, as if the lads were all born brilliant and decide to harvest their souls for added inspiration. Peter Nichols has never sounded more accomplished, compelled towards excellence by the grandiose keyboard avalanche which in turn is propelled muscularly by both Tim Esau's burly bass and Paul Cook's driving rhythmic pulse. Guitarist Holmes does finally step out into the spotlight and he glitters with fluid streams of electricity, as well as arranging a sure fire IQ classic in the process, including the overt Genesis influences that we all know and love. Here, it's at its zenith in terms of successful seduction. The lovely "Fall and Rise" showcases Esau's exceptional fretless bass prowess (another valued prog idiosyncrasy), deft acoustic guitar from master Holmes who is a darn good player, as well as Nicholls vocalizing with his usual maitrise. A pleasurable ballad that will get many more repeats from my devices. When I first heard "Ten Million Demons" somewhat absent mindedly, I was taken slightly aback as I thought that Depeche Mode had suddenly gone progressive and bullied themselves onto this record! Just like their friends Galahad (who have been crafting quality neo-prog for 29 years now), IQ has been unafraid of infusing little hints of synth electronica, a trait that has kept their respective recent releases fresh and enticing. The track again showcases Neil Durant's keyboard command, capable to do his Tony Banks thingy as well as a mean Thomas Dolby!

While we are at it, the lugubrious "Hardcore" does just that, incorporating tenser tendencies that swerve near neo-gothic horizons, something wholly Wagnerian but in a more prog context, injecting brooding rhythms and somber motifs , and need I to repeat myself , more of that unctuous Mellotron! This hazy piece seeks out some eerie spectral environments, daubing greyish halos on the grave and funereal accompaniment. Another brief Esau bass roulade introduces a shattering Holmes solo, very Hacketty and Ant Phillipsy, all emotion and restraint, finishing off with a long acoustic foray. Sublime! I have always hoped for an album smothered in unending waves of my favorite progressive sound, the Choir Mellotron and truth be said, "Road to Bones" has enough to keep my bumps goose-ing! Incredibly orgasmic, the music presented here will undoubtedly provide many hours of future relaxation and high fidelity leisure. The production, the sound, the artwork and booklet are all of first rate quality, making this a necessary icon in the prog pantheon, 2014 has been now officially blessed with even more golden status. Prog is in good hands as long as IQ provides the Guiding Light.