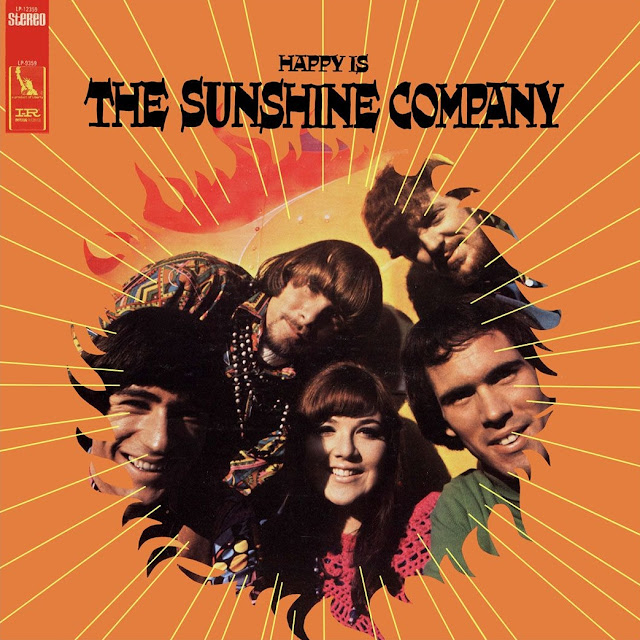 The Sunshine Company's very name summons the spirit of the mini-genre of 1960s pop-rock that, long after its heyday, was named sunshine pop. So does their music, with the requisite exquisite multi-part male-female harmonies, buoyant optimism, and luxuriant late-1960s L.A. studio production. Look a little under the surface, though, and you find tinges of eccentric melancholy that set them apart from many of the frothy Mamas and the Papas-like groups of the period. Just as their music was more multi-dimensional than you might be led to believe by their trio of Top 100 hits, so was their story more complex than many would imagine. Could there have been any other band whose brief career whisked them through the orbits of the Carpenters, the Fifth Dimension, Jackson Browne, the Jefferson Airplane, Mary McCaslin, and John Davidson, ending at the even unlikelier destination of a pre-stardom Gregg Allman?

Like many of the Southern Californian pop harmony groups of the second half of the 1960s - the Mamas and the Papas being the most famous example - the Sunshine Company's roots were not in pop, but in folk. Guitarist/keyboardist Maury Manseau, guitarist Larry Sims, singer Mary Nance, and drummer Merle Brigante met as students hanging around the same cafeteria table at Los Angeles Harbor Junior College, where Maury and Mary sang in the choir. Manseau had sung in a folk duo with John Bettis (who later co-wrote Carpenters songs with Richard Carpenter) that often opened for Hoyt Axton. The future Sunshine Company members moved in a circle of acoustic-oriented singer-songwriters based a little south of L.A., in Orange County and beach towns like Huntington Beach. Jackson Browne, Tim Buckley, Steve Noonan, Pamela Polland, the Nitty Gritty Dirt Band, and Steve Gillette, all of whom went on to be recording artists with widely varying degrees of success, were some of their friends in this fertile SoCal scene.

After a club gig in Tustin, Nitty Gritty Dirt Band manager Bill McEuen (brother of the Dirt Band's John McEuen) went backstage and offered future Sunshine Company members a chance to record a song he had in mind. Though they had no recording aspirations, they gave it a go, putting their vocals on top of a track that had already been recorded for the tune. The song was "Up, Up and Away," and it would have been their first single had the Fifth Dimension not released their own version, which soared into the Top Ten in the summer of 1967.

The Sunshine Company's version came out on their first LP, but in the meantime McEuen brought them another song to record vocals onto, "Happy." "We didn't think anything about it, really," says Manseau. "It hadn't worked out the first time. Before we knew it, we had a phone call from Bill saying, you guys have just made the national charts" -- where "Happy" peaked at #50. They needed a name in a hurry to put on the single, and took a suggestion from another of their friends at the cafeteria table, who was eating crackers made by the Sunshine Company. Guitarist Red Mark, who'd been playing in a bar band with Brigante, came in to make the group a quintet. Their next single, a cover of Steve Gillette's "Back on the Street Again," became their biggest hit, making #36, and going a lot higher on L.A. radio charts. The characteristically lush George Tipton arrangement changed a solid folk song to an AM radio-ready single.

Gillette, says Manseau, was "the one artist that really got me involved in liking contemporary acoustic music," and the band would cover several of his songs. "I had broken up with the first real love of my life, and had written most of the song," remembers Gillette of "Back on the Street Again." "I was home for the Christmas holidays 1966 when John [Bettis] and Maury came in to hear me, and I sang 'Back on the Street Again' for them. As far as I know they had no tape, probably not even any written notes. It wasn't until later that I finalized the bridge. The version they recorded was based on partial memory and, I'm sure, some improvisation, aided by the amazing arrangement George Tipton did. I loved everything about it." The song also showed up on the second album by Linda Ronstadt and the Stone Poneys, with Ronstadt and Gillette duetting on the vocals.

Had they had their way in the studio, the Sunshine Company probably would have sounded more like the Stone Poneys themselves. Much of their material may have been pure sunny SoCal pop, such as "Just Beyond Your Smile," which was co-penned by Tony Asher (who had written with Brian Wilson of the Beach Boys during the Pet Sounds era). But their real heart lay closer to rootsy singer-songwriter folk than the child-like naivete conveyed by their name and some of their songs. Such folk-rock tastes were reflected in some of the material they chose to cover, such as John and Terence Boylan's "Look, Here Comes the Sun," which made #56 in 1968; "Four in the Mornin'," done by Jesse Colin Young on his 1964 debut LP; the Steve Gillette-Tom Campbell collaboration "Darcy Farrow" (which had already been recorded by Ian & Sylvia); and George Harrison's "I Need You."

The last of those was based on an arrangement by then-unknown Mary McCaslin, who would achieve considerable fame on the folk circuit in the 1970s, in part for her imaginative recasting of Beatles songs into acoustic tunes. (McCaslin's own 1968 Capitol recording of "I Need You," unissued at the time, finally came out in 1999 on Rain -The Lost Album.) On "Springtime Meadows," written by sometime Gillette collaborator Tom Campbell (who like Gillette had some of his songs covered by the Stone Poneys), they sounded not unlike early Fairport Convention, when Ian Matthews was in that band's lineup. In fact, Manseau says they hoped to cover Fairport Convention vocalist Sandy Denny's "Who Knows Where the Time Goes?," but never were able to do so for release.

"It was a struggle with Imperial, because they kind of wanted to carbon-copy 'Happy' over and over," confesses Manseau. "We didn't like a lot of the pop, bouncy material they brought us. Mostly they were things we couldn't reproduce on stage, and it wasn't really what we did well. Live we were doing Jackson Browne's material before he got known." Still, even in some happy-go-lucky cuts like "Children Could Help Us Find the Way," there was an undercurrent of sadness. "A Year of Jaine Time" had a melody that was not unlike Jackson Browne's "These Days" in parts, and a young Gregg Allman was responsible for penning the enchanting "Sunday Brought the Rain." If such folk-rock leanings are a surprise to Allman Brothers fans, it should be remembered that Allman himself would cover Browne's "These Days" on his first solo album. Manseau says he actually taught Allman "These Days," and confirms that Gregg "really liked folkie traditional and contemporary acoustic music. Gregg and Duane [Allman] and Larry -we lived in the same apartment complex, we would sit around and trade material." The group's original songs also gave a stronger clue to their true direction, particularly the Manseau-Sims composition "I, To We, and Back Again," with its eerie decaying discord on the fade.

The juxtaposition of these sorts of songs with more innocuous, cheerful, slickly produced fare gave their albums a bit of a schizophrenic quality. Manseau recalls A-team Hollywood session vets like Joe Osborne, Jim Gordon, and Carol Kaye contributing to some dates, overseen by producer Joe Saraceno, most famous for handling the Ventures. "It reflects this ongoing fight we had with the record company," says Manseau of the odd balance in their repertoire. "We had to give a lot to get a few things on that we liked. Joe's point of view was, put strings on it, big production; always wanted to double vocals." Comments Saraceno, "I felt that folk [music] as they knew it wouldn't happen. I felt that with the Sunshine Company, as a producer, you had to launch them with sort of a gimmick record.  I said, 'Look, let's get a hit and then invite the public into your world after you're popular,' and they agreed to that. Then we started doing what they liked to do."

Saraceno, who calls them the "most talented group I've ever worked with or seen," puts a lot of blame on their failure to go further on the record company politics that had kiboshed the release of "Up, Up and Away" -- "they really got screwed." Maury admits to feeling caught between being a "semi-electric, semi-acoustic band," and Gillette amplifies, "There was a tension within the group. Red, and probably Larry and Merle, were anxious to get a little more heavy, while Maury and Mary fostered a more Ian & Sylvia delicate folk direction. The second Sunshine Company album shows some of the efforts to accommodate those diverse energies, but it was really Maury's connection with me that accounted for the presence of [my] songs."

The group did make some headway as a touring act, opening for the Jefferson Airplane for a couple weeks in 1968. Manseau recalls Bill Graham introducing the Sunshine Company at a San Francisco show at the Fillmore with the words, "I know that San Francisco audiences haven't really warmed to this group. But I think it's one of the few good things that ever came out of L.A." Yet their touring schedule was as much of a mismatch as some of their recorded material. The same year they toured with the Airplane, they also did six weeks opening for vapid variety star John Davidson, and almost ended up playing a show in a Chicago park during the 1968 Democratic convention before they decided to pass when rioting broke out.

A third album brought Dave Hodgkins aboard as additional guitarist, and the group was getting closer to being a self-contained unit calling their own shots. "Probably the first time we started sounding like a band was in summer of '68," says Manseau. The Hodgkins lineup reflected "more the kind of things that we were able to do that sounded more like the band." Still, there were diversions like "I Hate Pigeons." "We were bargaining all the time with Joe Saraceno," explains Manseau. "Novelty tunes, he always wanted us to do that. So we promised that, okay, we would do it. As you can hear on the record, we got to a certain point [with the song]...we just started kicking all the equipment around in the studio, the drums and stuff, you can actually hear that. And I guess to get back at us, he kept it and put it on the record."

A fourth album was started, but not finished, before the group decided to pack it up out of frustration, thinking, as Manseau recalls,  "We're not having a good time, we're not getting support we need." Manseau, Sims, Brigante, and guitarist Tippy Armstrong then put together an unnamed band with Gregg Allman as the focus. They recorded enough unreleased material (including an early version of "Whipping Post") for Liberty around late 1969 for an entire album, says Manseau, but it remained locked in the vaults when Gregg reteamed with his brother Duane to form the Allman Brothers.