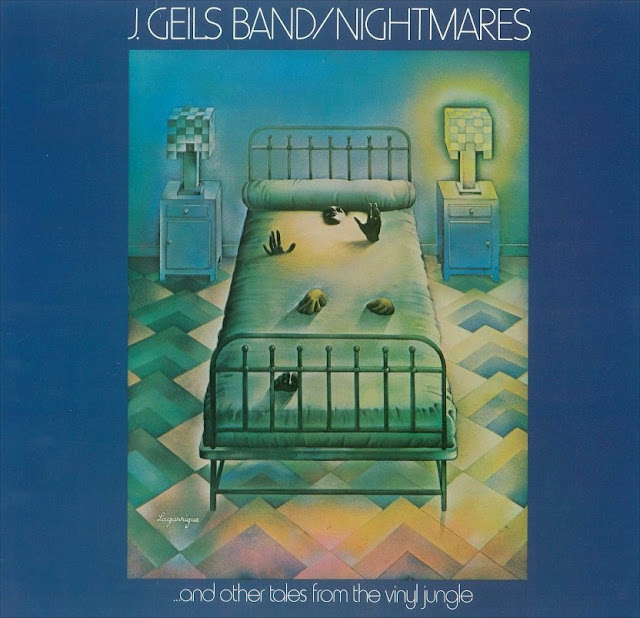 The J. Geils Band was one of the most popular touring rock & roll bands in America during the '70s. Where their contemporaries were influenced by the heavy boogie of British blues-rock and the ear-splitting sonic adventures of psychedelia, the J. Geils Band was a bar band pure and simple, churning out greasy covers of obscure R&B, doo wop, and soul tunes, cutting them with a healthy dose of Stonesy swagger. While their muscular sound and the hyper jive of frontman Peter Wolf packed arenas across America, it only rarely earned them hit singles. Seth Justman, the group's main songwriter, could turn out catchy R&B-based rockers like "Give It to Me" and "Must of Got Lost," but these hits never led to stardom, primarily because the group had trouble capturing the energy of its live sound in the studio. In the early '80s, the group tempered its driving rock with some pop, and the makeover paid off with the massive hit single "Centerfold," which stayed at number one for six weeks. By the time the band prepared to record a follow-up, tensions between Justman and Wolf had grown considerably, resulting in Wolf's departure, which quickly led to the band's demise. After working for years to reach to top of the charts, the J. Geils Band couldn't stay there once they finally achieved their goal.

Guitarist J. Geils, bassist Danny Klein, and harpist Magic Dick (born Richard Salwitz) began performing as an acoustic blues trio sometime in the mid-'60s. In 1967, drummer Stephen Jo Bladd and vocalist Peter Wolf joined the group, and the band went electric. Before joining the J. Geils Band, Bladd and Wolf played together in the Boston-based rock revivalist band the Hallucinations. Both musicians shared a love of arcane doo wop, blues, R&B, and rock & roll, and Wolf had become well-known by spinning such obscure singles as a jive-talking WBCN DJ called Woofuh Goofuh. Wolf and Bladd's specialized tastes became a central force in the newly revamped J. Geils Band, whose members positioned themselves as tough '50s greasers in opposition to the colorful psychedelic rockers who dominated the East Coast in the late '60s. Soon, the band had earned a sizable local following, including Seth Justman, an organist who was studying at Boston University. Justman joined the band in 1968, and the band continued to tour for the next few years, landing a record contract with Atlantic in 1970.

The J. Geils Band was a regional hit upon its early 1970 release, and it earned favorable reviews, especially from Rolling Stone. The group's second album, 'The Morning After', appeared later that year and, thanks to the Top 40 hit "Looking for a Love," the album expanded the band's following. However, the J. Geils Band continued to win new fans primarily through their concerts, so it was no surprise that their third album, 1972's 'Full House', was a live set. If the next three Geils albums - 'Ladies Invited' (1973), 'Nightmares And Other Tales From The Vinyl Jungle' (1974), and 'Hotline' (1975) - represented something of a commercial falling off (although each placed well inside the Top 100), they each still contained moments of undeniable get-down-to-it-ness. Wolf and Justman had by then developed into an outstanding song writing team, while the musicians transcended their roots to become the kind of unpredictable, intuitive music machine that leaves listeners breathless every time.
.
"The key to the band was chemistry and loyalty", says Justman. "We wanted the solidity that Booker T. & The MG's or the Funk Brothers of Motown had. You play together until it becomes second nature, like breathing together." "Detroit Breakdown" and "Must Of Got Lost" (the latter the band's highest charting single up to that point, reaching #12), two Wolf-Justman originals from 'Nightmares', and Hotline's "Love-Itis" (written by Memphis soulster Harvey Scales with Albert Vance) and "Believe In Me" (written by soul legend Curtis Mayfield) illustrate Justman's point and stand out among studio recordings done for Atlantic. While their live shows remained popular throughout the mid-'70s, both 'Hot Line' (1975) and the live 'Blow Your Face Out' (1976) were significant commercial disappointments. The band revamped its sound and shortened its name to "Geils" for 1977's Monkey Island. While the album received good reviews, the record failed to bring the group increased sales. In 1978, the J. Geils Band left Atlantic Records for EMI, releasing Sanctuary later that year. 'Sanctuary' slowly gained a following, becoming their first gold album since Bloodshot. 'Love Stinks' (1980) expanded the group's following even more, peaking at number 18 in the charts and setting the stage for 1981's 'Freeze Frame', the band's high watermark. Supported by the infectious single "Centerfold" -- which featured a memorable video that received heavy MTV airplay -- and boasting a sleek, radio-ready sound, Freeze Frame climbed to number one.

"Centerfold" shot to the top of the charts late in 1981, spending six weeks at number one; its follow-up, "Freeze-Frame," was nearly as successful, reaching number four in the spring of 1982. The live album "Showtime!" became a gold album shortly after its late 1982 release. While the band was experiencing the greatest commercial success of its career, relationships between the members, particularly writing partners Justman and Wolf, were volatile. When the group refused to record material Wolf had written with Don Covay and Michael Jonzun, he left the band in the middle of a 1983 recording session. Justman assumed lead vocals, and the group released 'You're Gettin' Even While I'm Gettin' Odd' in late 1984, several months after Wolf's successful solo debut, 'Lights Out'. The J. Geils Band's record was a failure, and the band broke up in 1985. Magic Dick and J. Geils reunited in 1993 to form a contemporary blues band that has released two CDs, 'Bluestime' and 'Little Car Blues'. 'Nightmares' was the first J.Geils Band album that I acquired as a teenager, having only heard "Detroit Breakdown" while browsing at my local import shop. My copy is a U.S pressing and features a cardboard inlay. The remaining tracks on this album are just as strong as the opener and I just love listening to this album from start to finish. There are so many rich sounds and uptempo beats going on, complementing the strong vocals of Peter Wolf. This is a great album, even if it wasn't their most successful album from a commercial point of view.