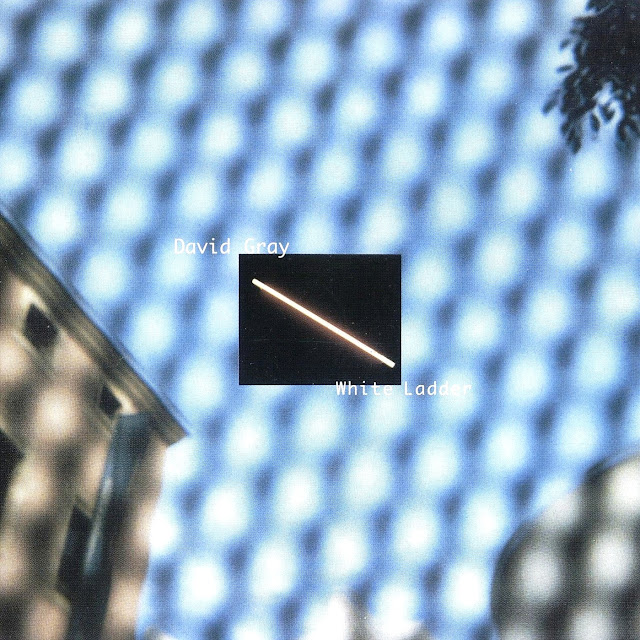 "White Ladder" is the fourth studio album by English folk singer-songwriter David Gray. It was first released in November 1998 through Gray's own record label, IHT Records, but failed to chart. On 1 May 2000, the album was re-released by Dave Matthews' label ATO Records and debuted at number 69 on the UK Albums Chart, before climbing to number one on 5 August 2001, more than a year later. "White Ladder" produced five singles, including the hit "Babylon", which ignited interest in the album and shot Gray to worldwide fame. Other singles released from the album were "This Year's Love", "Please Forgive Me", "Sail Away" and "Say Hello Wave Goodbye". "White Ladder" spent almost three consecutive years in the UK top 100, charting between May 2000 and March 2003. Its total charting time as of 2015 is 175 weeks, making it one of the longest-charting albums in UK chart history. It was massively successful in Ireland, where it spent six consecutive weeks at number one on the Irish Albums Chart and had sold 350,000 copies by 2002. It is currently the biggest selling album of all time in Ireland. "White Ladder" was the fifth best-selling album of the 2000s in the UK, selling 2.9 million copies. "White Ladder" has sold over 3 million copies in the UK, making it the eighth best-selling album of the 21st century and the 26th best-selling album of all time. The album has also sold over 7 million copies worldwide.

"White Ladder" was self-financed and was recorded in Gray's London apartment. To support the album, Gray toured the United States with the Dave Matthews Band, whose lead singer Dave Matthews released "White Ladder" in the United States on his label ATO in 2000 as the label's first release. Following the album's success, he toured the US and UK extensively between 2000–01 to promote the album. A hidden track, "Through to Myself", can be found in the pregap of the original 1998 IHT Records release (by rewinding from the start of "Please Forgive Me"). The US CD release does not include the secret track, but instead includes the audio bonus track "Babylon II", as well as an enhanced section which includes a mini-documentary with a live performance of "Babylon", a brief biography and web links. The Japanese release includes the bonus track "Over My Head", which also appears as a B-side on the 1999 "Babylon" single.

The cover of "Say Hello Wave Goodbye", originally by Soft Cell, features additional lines from the Van Morrison songs, "Madame George" and "Into the Mystic". "White Ladder" was originally released on Gray's own label IHT Records in November 1998. It spent six weeks at number one in Ireland, selling 100,000 copies in that time. By September 2001, the album had been certified 20× Platinum by the Irish Recorded Music Association (IRMA) for sales of over 300,000; it remains the biggest-selling album in Ireland. It was only after its re-release in May 2000 on ATO Records that the album managed to chart in the UK, debuting at number 69 on the UK Albums Chart. On 5 August 2001, fifteen months after the re-release and almost three years after its original release, it reached number one. "White Ladder" has spent a total of 175 weeks on the UK Albums Chart. Aside from "Please Forgive Me," which charted at No. 72 on the UK Singles Chart, all other single releases charted within the Top 20: the re-released "Please Forgive Me" charted at No. 18, and "Say Hello Wave Goodbye" and "Sail Away" peaked at No. 26. "White Ladder" was the UK's fifth best-selling UK album of the 2000s. It had sold 2,940,575 units in the UK by 24 July 2011 and hit the 3 million mark in March 2015. As of June 2015, it is the eighth best-selling UK album of the 2000s.

In the United States, the album peaked at No. 35 on the Billboard 200, spending a whole year on the chart. The album earned Gray a nomination in the United States at the 44th Grammy Awards for Best New Artist. Reflecting on the success of "White Ladder" in 2010, Gray stated: "I still pinch myself when I think about it. That record will be there for ever. It just connected in such a big way with people. It was the period that came after that was difficult. I'm sort of seen as a pop artist. I'm dismissed as slight, I'd say, because of White Ladder." In Ireland, "White Ladder" was originally released on November 27th 1998, entering the Irish chart at #25. 61 weeks later, and for the first time, the album went to #1 on January 24th 2000, spending six weeks at #1, and subsequently spending much of the next four years in and around the top 10. It eventually went 23 x Platinum and remains the bestselling album in the Republic of Ireland; at one stage, it was said that 1 in every 4 Irish households had a copy of the album.

The year 2001 also saw the release of two compilation albums of Gray's early works and unreleased material, The EPs "1992-1994" and "Lost Songs 95-98", both of which followed "White Ladder" into the Top 20 in the UK Albums Chart. In November 2002, Gray released the follow-up to "White Ladder", entitled "A New Day at Midnight". The new release did not receive the same critical acclaim as its predecessor, but still went straight in at number 1, famously beating Pop Idol runner-up Gareth Gates's debut album "What My Heart Wants to Say" to the summit and selling nearly 150,000 copies in its first week of release. It went on to achieve platinum status within a year, eventually being certified four times platinum overall, and was the second-biggest selling album by a UK artist in 2002, behind Pop Idol winner Will Young's debut album "From Now On". "A New Day at Midnight" produced two further UK Top 30 hits in "The Other Side" and "Be Mine" and a minor US hit with "Dead in the Water".

David Gray's early music was in a contemporary folk-rock, singer-songwriter mode; his primary instrument was acoustic guitar, with occasional piano. 1996's album "Sell, Sell, Sell" featured some rock arrangements and electric instrumentation. Starting with the release of "White Ladder", Gray began to make significant use of computer-generated music to accompany his voice and acoustic instrumentation, a technique which differentiates him from many of his peers. "A New Day at Midnight" continued this direction, although lyrically it was darker in tone than "White Ladder" and the instrumentation much more downbeat. In the liner notes, Gray dedicated the album to his father, who died in 2001. Gray also provided vocals on the electronic-based band Orbital's 2001 single "Illuminate". Despite the move to more complex music, Gray has used small-scale, often home-based, recording methods and equipment and espoused a do-it-yourself approach to music production.