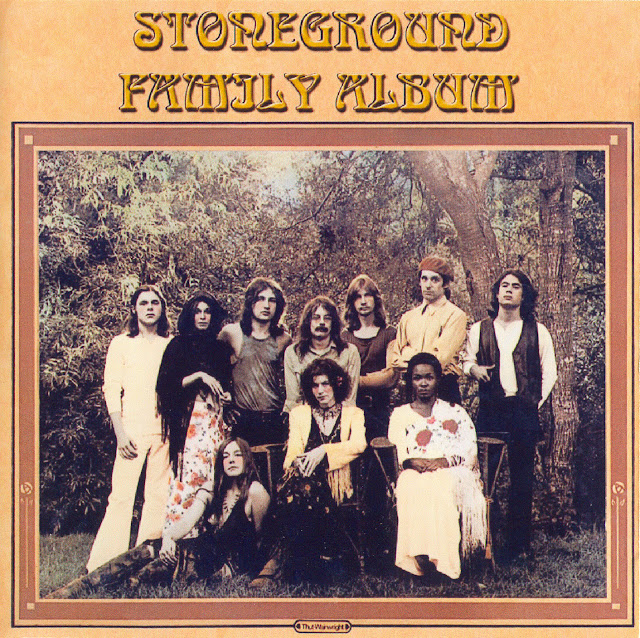 Stoneground was formed in 1968 in the San Francisco suburb of Concord, California. The original lineup consisted of Tim Barnes (guitars, vocals], Craig Randall (bass, vocals), and Mike Mau (drums). Band manager and former Autumn Records executive Tom Donahue, a San Francisco DJ, introduced the band to ex-Beau Brummels singer Sal Valentino and John Blakely (guitars, bass), both of whom joined Stoneground. The group appeared in two films: 'Medicine Ball Caravan' (1971), a documentary of a 154-person bus and truck tour that set out to spread the gospel of flower power to the hinterlands of the U.S. It was eventually released with the far more interesting title of 'We Have Come For Your Daughters', and among those appearing in the movie were Tim Barnes (lead guitar), John Blakeley (vocals/guitar, ex-The Fast Bucks, who made a 1967 LP for Kama Sutra which also included Ron Nagle), Brian Godula (bass), a quartet of female vocalists in Lynn Hughes [ex-Tongue & Groove, a short-lived Bay Area band in the late 1960s), Deirdre La Porte (who apparently designed album sleeves), Lydia Mareno and Annie Sampson (both from the San Francisco cast of 'Hair' - for the uninitiated, 'Hair' was a massively popular musical of the late 1960s), Cory Lerios (keyboards), Steve Price (drums) and Sal Valentino, who were all members of Stoneground, and Bonnie Bramlett (of Delaney S. Bonnie fame], Alice Cooper, B.B. King and cajun fiddler Doug Kershaw.

'Dracula A.D. 1972' is a 1972 horror film, produced by Hammer Films. It stars Christopher Lee, Peter Cushing and Stephanie Beacham. Unlike earlier films in Hammer's Dracula series, 'Dracula A.D. 1972' has (at the time of filming) a contemporary setting, in an attempt to update the Dracula story for modern audiences. Dracula is brought back to life in modern London. The soundtrack was composed by Manfred Mann member Mike Vickers, and is in a funky, 'blaxploitation' style reflecting the early 1970s setting of the film. It was not released commercially until a CD release in 2009. The film also features two songs, 'You Better Come Through For Me' (a song which also appears on 'Stoneground 3' here) and 'Alligator Man', when Stoneground were a late replacement for The Faces. Tom Donahue recruited Pete Sears for Stoneground when they were in the UK for the Medicine Ball Caravan in 1970, but after recording the eponymous debut LP included here, Sears was the bass player in the Long John Baldry Blues Band for a US tour and also joined Copperhead, the band launched by John Cippolina after he left Quicksilver Messenger Service.

Pete Sears returned to Blighty to join a band launched by keyboard star Nicky Hopkins, but far various reasons, that band didn't happen, so Sears went on to co-produce, arrange the music and play on, Kathi McDonald's Insane Asylum' album, using many celebrated guest stars, including Sly Stone, The Pointer Sisters, Nils Lofgren, Neal Schon and the Tower of Power horns. He also co-founded a band called Sears, Schon, Errico with Neal Schon and Greg Errica, and in 1974, he joined Jefferson Starship, leaving that band circa 1987, and also working with Jefferson Airplane offshoot Hot Tuna. It seems to be generally agreed that his time with Jefferson Starship was at the height of that band's achievements, and Sears conceivably deserves the too often used epithet legend' far more than many others. Five of the ten tracks on the first Stoneground LP were written by Sal Valentino, who co-produced it with Tom Donahue. 'Rainy Day In June' was written by Ray Davies and had appeared on the 1966 Kinks LP, 'Face To Face', while 'Great Change Since I've Been Born' was written by Reverend Gary Davis, (1896 - 1972], a blues and gospel singer and guitarist, whose fingerpicking guitar style influenced many other artists, including Stefan Grossman, David Bromberg, Dave Van Ronk, Rory Block, Bob Dylan, the Grateful Dead, Wizz Jones, Jorma Kaukonen and John Sebastian (of the Lovin' Spoonful).

'Don't Waste My Time' appeared on a couple of LPs by John Mayall, who co-wrote the song with bass player Steve Thompson. A live version is on Mayall's 1969 album, The Turning Point', and a studio take was on the same year's studio effort, 'Empty Rooms'. Bad News' was written by the often under-rated John D. Loudermilk (1934 - 2016), a singer/ songwriter from North Carolina, who wrote, among many others, 'A Rose & A Baby Ruth' (UK title 'A Rose & A Candy Bar'), which in 1956 was the first and only US Pop Top 10 hit for George Hamilton IV, and Eddie Cochran's first hit, 'Sittin' In The Balcony', not to mention the two biggest Nashville Teens hits, Tobacco Road' and 'Google Eye', plus Break My Mind', Then You Can Tell Me Goodbye' and 'Ebony Eyes'. Perhaps another aspect of this album worth a mention, is the message on the rear of the sleeve, which reads "Rock'n'Roll Is Bio-Degradable'.

1971 brought The Stoneground Family Album', a double LP with one side of studio recordings and three sides of live material. The album includes cover versions of songs by such artists as Bob Dylan, Johnny Cash, Hank Williams and Swamp Dogg. By 1973 only Barnes and Sampson remained from the original group, and Stoneground kept going until 1984, Barnes and Sampson on board all the while. Pete Sears found the most fame of any of the original Stonegrounders as a member of Jefferson Starship. While many of the others faded from the music business, Barnes remains active in Northern California as a guitarist in Mick Martin and the Blues Rockers, as does Sampson, who plays live often and releases solo recordings on her own label.

Which brings us to 1972 and the next LP by Stoneground, the uninspiringly titled 'Stoneground 3' described thus on the internet: "Released in late 1972, 'Stoneground 3' sold poorly and the band was dropped by Warner Bros. With no label and escalating tensions within the group, Stoneground played a final concert on January 6, 1973 at the Sacramento Memorial Auditorium. Within weeks of the concert, Valentino quit the group. Band members Cory Lerios and Steve Price left and formed a new group, Pablo Cruise. The remaining members also departed except for Tim Barnes and Annie Sampson, who reformed Stoneground with a new roster later that year". The line-up for 'Stoneground 3' was Valentino, the female vocal quartet of Lynn Hughes, Deirdre La Porte, Lydia Mareno and Annie Sampson, Tim Barnes, John Blakeley, Terry Clements (horns), David McCulloch (bass), Cory Lerios and Steve Price. As mentioned before, it's difficult for a group with so many members to make both decisions and money, so they split up, but later reformed. Stoneground continued for several years after Sal Valentino left the band in 1973.