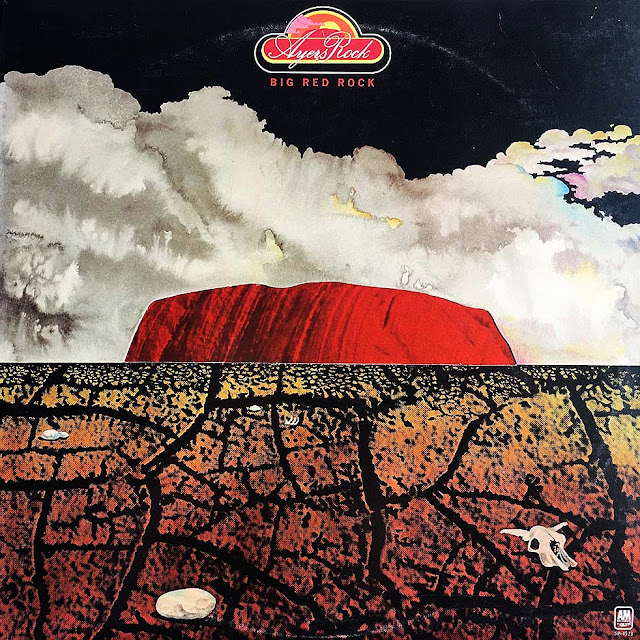 Ayers Rock was the leading Australian 'jazz-rock' group of the 70s, fusing rock with influences from soul, R&B, jazz and Latin music. The band was built on world-class standards of playing and complex arrangements, and inspired by overseas groups such as Traffic, Santana and Weather Report. The original members were all seasoned players, widely regarded as among the best musos in the country, and their musical connections were woven through a series of major bands of the 60s and early 70s. Mark Kennedy was and is still widely regarded as one of Australia's best drummers. He rose to prominence as the original drummer in Spectrum. He left that band in late 1970, just after recording their first LP, and he became an in-demand session player, as well as working in a series of loosely connected groups including King Harvest (where he first teamed up with McGuire and Doyle) and Friends with Leo De Castro.

Duncan McGuire was a true rock veteran (and one of the unsung heroes of Aussie music). His first band was The Phantoms way back in 1959. He was a member of The Epics (1962-64), who backed Little Pattie live and on her early Singles and first album, as well as playing with Reg Lindsay, Johnny Ashcroft, Brian Davies, Jay Justin and Johnny O'Keefe. From 1966-68 he was a member of The Questions (Doug Parkinson's first major band) which also included Ray Burton and Doug Lavery (who later joined The Valentines and Axiom). McGuire stayed with Parkinson through In Focus and Fanny Adams before shifting to Melbourne and playing with King Harvest and Friends. Jimmy Doyle had been a member of the backing bands for The Delltones and Dig Richards, and during the early Sixties he also worked as the musical director for renowned honky-tonk pianist Winifred Atwell. Ray Burton had been the rhythm guitarist in the Dave Bridge Quartet in the early Sixties, and then a member of the Delltones' backing band, after which he joined the first lineup of successful Sydney harmony-pop group The Executives. He worked variously with Doyle, McGuire and Kennedy in King Harvest, Doug Parkinson In Focus and Friends. He relocated to the USA in the early 70s, where he worked Helen Reddy and co-wrote her 1972 international mega-hit "I Am Woman".

In 1973 the above-named four took the logical step and formed their own band, McGuire Kennedy Burton. Later in the year, they added another player, multi-intrumentalist Col Loughnan. Col had actually started his career as lead singer with Sydney vocal group The Crescents. In 1962 Col was recruited to replace Noel Widerberg, lead singer with The Delltones, who had been tragically killed in a car accident earlier in the year. Col performed with The Delltones for five years (1962-67). In the late Sixties Col returned to his first love, jazz, and his prowess on a wide range of instruments (alto, tenor and baritione saxophones, flute, keyboards and percussion) gave the Ayers Rock sound a distinctive edge. With Loughnan on board, the new band changed their name to the more marketable (and patriotic) Ayers Rock. They were one of the first groups signed to Michael Gudinski's newly established Mushroom label, and their debut single, "Rock'n'Roll Fight", was issued at the end of 1973.

They performed at Sunbury '74 and one track from their set, Ray Burton's "Morning Magic", was included on the Highlights of Sunbury 1974 LP, which has recently been re-released in the 2-CD set Highlights of Sunbury 1973 and 1974 on Michael Gudinski's Liberation Blue label. These tracks are the only extant Ayers Rock recordings to feature Burton, who left the band during 1974. Col Loughnan's official website features a superb colour clip of the group performing live at Sunbury, with excellent sound. He was replaced by singer-guitarist Chris Brown, whose previous credits included a stint in Little Sammy & The In People, the noted '60s Sydney club outfit led by singer Sam "Little Sammy" Gaha (father of TV's Eden and Danielle Gaha); although not commercially successful, this notable band variously included Brown, Harry Brus, Michael Carlos, Barrie McAskill, Col Nolan and Janice Slater.

Ayers Rock's debut album "Big Red Rock" was taped live before an invited audience at Armstrong's Studios in Melbourne over two nights in September 1974. The live-in-the-studio approach worked extremely well for Ayers Rock, and the album clearly demonstrated why their awesome live 'chops' had made them such a popular concert attraction. But it also was something of a necessity for the cash-strapped label -- they took the same approach with andnother early signing, Mackenzie Theory. The Ayers Rock LP reportedly cost Mushroom a mere $5000 to record. "Big Red Rock" was an early critical and commerical success for Mushroom, showcasing the band's considerable prowess and the material was a good balance between the more commercial song-based material of McGuire and Brown and the more adventurous instrumentals. The LP features three songs by McGuire, including their memorable second single, the Latin-flavoured "Lady Montego", a song that dated back to McGuire's stint in Friends; an earlier, slower version appears (in a live recording) on the Garrison: The Final Blow LP.

"Big Red Rock" also features two excellent pieces by Loughnan, two songs by Chris Brown, and a dazzling cover of Joe Zawinul's "Boogie Woogie Waltz", originally recorded by Weather Report (who were at that time virtually unknown in Australia). Loughnan's power-jam "Crazy Boys" is also worth hearing for its hilarious intro; dedicated to an unnamed Sydney hamburger joint, it includes a sly reference to a "Gudinski burger" and very funny joke about "Dr Hopontopovus, the Greek gynaecologist". As Vernon Joyson has noted, Ayers Rock's recordings suggest that there was some dilemma about whether they should pursue a more expansive instrumental-based approach or opt for a more song-based commercial sound. From the evidence of "Big Red Rock", its arguable that its the instrumental tracks -- "Crazy Boys", "Big Red Rock" and the brilliant cover of "Boogie Woogie Waltz -- that stand up best today, but the demands of radio airplay and gigging meant that this dilemma was never satifactorily resolved, and the group's relatively short lifespan and small catalogue meant that they never really got the chance to reach their full potential.

In the late 1975 Ayers Rock performed at the final gigs at Melbourne's fabled Reefer Cabaret. Live versions of the Stones' "Gimme Shelter" and "Boogie Woogie Waltz" were included on the double-album A-Reefer-Derci, culled from performances from the last two nights on 30 and 31 December 1975, and released by Mushroom in 1976. Like Mushroom's earlier Garrison: The Final Blow set, it commemorated the closure of the venue and was a means of thanking the Reefer Cabaret for supporting Mushroom's artists during 1974-75. During '75-76, Kennedy began working with Marcia Hines and they later became engaged, which led to him leaving Ayers Rock in 1976. He was replaced for a time by Russell Dunlop, who, like Kennedy, was a seasoned veteran, and a respected session player and producer, but his permanent replacement was hotshot young drummer Hamish Stuart, who has since become a mainstay of the Sydney music scene and one of the most respected drummers in the country. At this point the group also added a permanent keyboard player, Andy Cowan (ex Madder Lake).

Ayers Rock's second LP "Beyond" was not quite as successful sales-wise, but no less impressiv musically. By this time the emphasis had shifted to longer works that allowed the band to showcase its considerable improvisational skills, and the LP consists of just six tracks, three each by Col Loughnan and Chris Brown. One of Brown's songs, "Little Kings", was lifted to become their third single. Recorded in Los Angeles, the album was vastly more expensive to record than its predecessor, reportedly costing Mushroom a whacking $60,000, but by this time Mushroom's coffers had been swelled by the massive success of Skyhooks. The LP was also released in the USA, with different cover art. Their fourth and final single for Mushroom, "Song For Darwin" (May 1976) was inspired by the Cyclone Tracy disaster that had devastated the city on Christmas Day 1975. After parting with Mushroom, the band broke up for about three years, but it was reformed by Brown, Doyle, Stuart and Cowan in 1979 and they established their own label, Red Rock. A new single, "On The Avenue" was released at the end of 1979, followed by "Lies" in early 1980, both issued through Polydor. The singles were both included on their third and final LP Hotspell, distributed by RCA. Unfortunately, the album was not successful and the band broke up in 1981.

Founding members Jimmy Doyle and Duncan McGuire have, sadly, both since passed away; Duncan died in 1986 from a brain tumour and Jimmy died in May 2006 from liver cancer. Recorded in one, live-in-the-studio session in September 1974, "Big Red Rock" was one of the first albums issued on the mighty Mushroom label. Despite the brief nature of the recording, the band was well prepared and the album stands as a fine example of musical skill and technique combined with song writing brilliance. This is where jazzy pop and blues rock textures meet jazz rock explorations and trippy soundscapes, where the band’s sound coalesced into a cogent whole. Ayers Rock could move from one style to the next with consummate ease. From the silky, jazzy pop of ‘Lady Montego’ (issued as a single), into the tough blues rock of ‘Nostalgic Blues’ which glides into the Frank Zappa Hot Rats styled jazz rock of ‘Crazy Boys’ and onto the jazz fusion magnificence of their version of Weather Report’s ‘Boogie Woogie Waltz’. The band also explored trippy soundscapes in the evocative title track where treated sax solos and wah-wah guitar emulated the didgeridoo, calling to mind the vast, forbidding landscape of the Red Centre. The group went on to make a mark on the vast USA touring circuit, playing to massive crowds and paving the way for Little River Band, AC/DC, Air Supply, Men at Work and INXS.