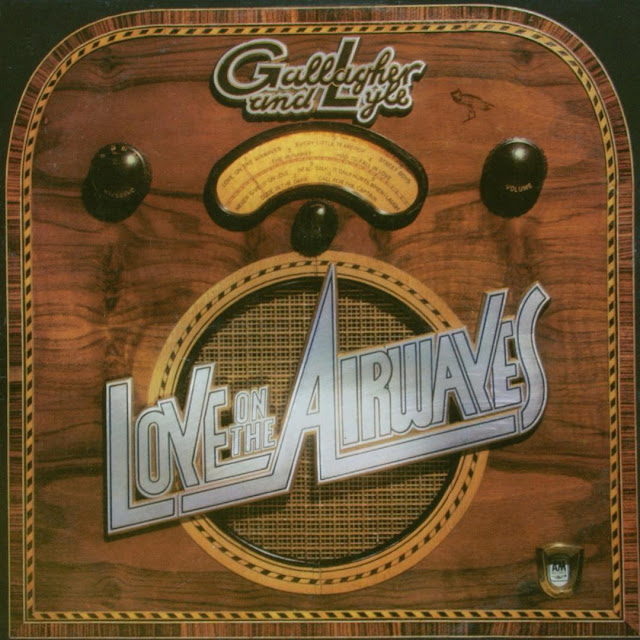 Gallagher and Lyle are a Scottish musical duo, comprising singer-songwriters Benny Gallagher and Graham Lyle. Their style consists mainly in pop, soft and folk rock oriented songs. Their first recognition came in 1968, when they were signed by The Beatles to write for Apple Records' artists. They were founding members of the band McGuinness Flint and wrote the 1970 UK chart hit "When I'm Dead and Gone". In 1972 they formed the duo Gallagher and Lyle, whose fifth album Breakaway charted well and included the hit songs "Heart on My Sleeve" and "I Wanna Stay with You". Don Williams took their song "Stay Young" to No. 1 on the US Country charts. The duo split in 1980, but re-formed in 2010. Gallagher and Lyle have worked, jointly and individually, on records with, among others, Paul McCartney, Eric Clapton, Pete Townshend, Ronnie Lane, Ronnie Wood, Joan Armatrading, Ralph McTell, Sandy Denny, Fairport Convention and Jim Diamond. Artists who have released Gallagher and Lyle songs include Bryan Ferry, Elkie Brooks, Fairport Convention, Art Garfunkel and Joe Brown.

They joined forces in 1959, initially as members of a local Largs-based band, The Bluefrets. They began writing original material for the band, while Gallagher also co-wrote "Mr Heartbreak's Here Instead" for Dean Ford and the Gaylords (later to become Marmalade). When they were signed by Apple Records, they wrote for musicians such as Mary Hopkin ("Sparrow", "The Fields of St. Etienne", "International", "Heritage" and "Jefferson"). There was a rare one-off single issued on UK Polydor 56093 in 1967; "Trees" b/w "In The Crowd" issued under the name 'Gallagher-Lyle', which preceded their success as songwriters at Apple. They also backed singer James Galt, a friend of theirs from Largs, on two singles for Pye Records that are now highly prized by northern soul collectors: "Comes The Dawn"/"My Own Way" and "With My Baby"/"A Most Unusual Feeling", both of which were composed by permutations of Gallagher, Lyle and Galt. These tracks have appeared on various CD compilations of 1960s rarities. In 1970 Gallagher and Lyle were original members of McGuinness Flint, writing nine of the 11 songs on the group's debut album, including the UK Singles Chart success "When I'm Dead and Gone" as well as the follow-up non-album single "Malt and Barley Blues", both of which were produced by Glyn Johns.

They recorded a second album, "Happy Birthday Ruthy Baby", with McGuinness Flint, again writing most of the songs, before leaving to form the duo Gallagher and Lyle in 1972, signing to A&M Records after their initial solo album was first released on UK and US Capitol Records. They recorded four albums: "Benny Gallagher and Graham Lyle", "Willie and the Lapdog", "Seeds" and "The Last Cowboy, again" under the auspices of Glyn Johns. But it was not until they teamed up with US producer David Kershenbaum for their fifth album "Breakaway", in 1976, that they charted again, with the hits "Heart on My Sleeve" and "I Wanna Stay with You", both of which reached Number 6 in the UK Singles Chart and also charted in the US. Their mellow sound was only briefly in vogue, and elusive further success (another minor hit in the UK was "Every Little Teardrop") prompted their split in 1980, by which time three more albums had been issued: "Love On The Airwaves" (which went silver in the UK), "Showdown" and "Lonesome No More". The latter was issued on Mercury Records; a further album recorded for that label, "Living On The Breadline", has never been released. The duo's original version of "A Heart In New York", which was to have been included on that set, appeared on 1991's compilation album "Heart On My Sleeve - The Very Best of Gallagher and Lyle". The UK Capitol and the UK A&M issue of their first album included their musical version of the poem "Desiderata". The US Capitol album is missing that track.

Graham Lyle formed his own publishing company Goodsingle Publishing (later to become goodsingle.com) in 1980, chiefly to administer his own copyrights, and began writing for other artists. His earliest post-Gallagher & Lyle compositions included the singles "Our Love" for Elkie Brooks and "Listen to the Night" for Climax Blues Band. Since then Lyle's songs have been recorded by some of the biggest names in music including Michael Jackson, Stevie Wonder, Ray Charles, Diana Ross, Etta James, Patti LaBelle, Anita Baker, Joe Cocker, Wyclef Jean, Fat Joe, Rod Stewart, Tom Jones, The Neville Brothers, Hall & Oates, Kenny Rogers, Crystal Gayle, Jim Diamond, The Judds, Wet Wet Wet, Paul Young, Bucks Fizz, Eros Ramazzotti and Warren G, but it is for his work with Tina Turner that he has become best known. Lyle formed a new songwriting partnership with Terry Britten, and their hits included the Grammy-winning Song of the Year and Record of the Year "What's Love Got to Do with It ?" and the multi-Ivor Novello-winning "We Don't Need Another Hero" for Tina Turner; and "Just Good Friends" for Michael Jackson. He also recorded an album with Tom McGuinness, credited to the Lyle McGuinness Band: "Acting on Impulse" (1983), as well as a solo portfolio album, "Something Beautiful Remains" (2003). A solo single, "Marley", was issued on Red Bus Records in the UK in 1983, while "Taking Off" - a TV advertising jingle, co-written with prolific session keyboardist Billy Livsey and credited to the Lyle-Livsey Ban - was released on the Dolphin label in 1984 but only in Ireland, where it became a Top 20 hit.

Benny Gallagher is a featured artist and co-owner of OnSong (an internet-based record label) with Derek Wilson. Gallagher has released two albums as a solo artist – Benny Gallagher on Stage, and more recently At the Edge of the Wave. The latter set features his tribute to Robert Louis Stevenson, "Tusitala"; this song has also been included on the Greentrax CD "The Great Tapestry of Scotland", which was released in late 2012 to accompany the launch of what will be the largest tapestry in the world. Gallagher and Lyle sang and performed as members of Ronnie Lane and The Slim Chance Band on the hit single "How Come" and the ensuing album "Anymore for Anymore", and they have worked, jointly and individually, on records with Mary Hopkin, Paul McCartney, Eric Clapton, Pete Townshend, Ronnie Lane, Ronnie Wood, Elkie Brooks, Joe Egan, Andy Fairweather Low, Gary Brooker, Dennis Coulson, Arthur "Big Boy" Crudup, Champion Jack Dupree, Joan Armatrading, Ralph McTell, Sandy Denny, Fairport Convention and Jim Diamond.

Other artists who have recorded Gallagher and Lyle songs include: Bryan Ferry, Colin Blunstone, Donavon Frankenreiter, Elkie Brooks, Fairport Convention, Fury in the Slaughterhouse, Joe Brown, Judith Durham, Little Anthony and the Imperials, Phil Everly, Ricky Nelson, Ringo Starr, Rita Coolidge, Status Quo, The Fureys, Lemon Jelly, and Jim Capaldi. The seeds for a reunion were sown in 2007 when both Gallagher and Lyle, as session musicians, appeared on an album by Canadian singer-songwriter Chris Tassone; this was recorded at London's Abbey Road Studios. In April 2009, the two Scots attended the opening of the Largs Heritage Centre. The following year, the duo re-formed. In October 2010 the pair staged two charity concerts in Largs in aid of Haylie House, a residential care home in the town. This was followed in June 2011 by 'The Big Gig', an all-star charity concert at Glasgow's Barrowland nightclub, in which they performed alongside Midge Ure, Jim Diamond and Marti Pellow. In September of that year, the duo appeared at the outdoor MOARE Festival in Faversham, Kent, which was headlined by former Average White Band stalwart Hamish Stuart.

2012 saw Gallagher and Lyle undertake their first tour since 1979, consisting of 9 dates at 8 Scottish venues. Their two dates at The Green Hotel in Kinross, a large golf resort, earned them the Mundell Music Award for Best UK Performance of the year, to add to their Tartan Clef Award for Lifetime Achievement, which they had received in November 2010. The soundtrack to the 2012 documentary film "We Went To War", directed by Michael Grigsby and relating the stories of three Vietnam War veterans, features the song "I Was A Soldier", which was written and performed by Gallagher and Lyle. In March 2016, Gallagher and Lyle performed together at the Belfast Nashville Songwriters' Festival. In November 2016, the duo returned to The Green Hotel in Kinross for four concerts. The summer of 2017 saw the duo perform as part of the 'Byre at The Botanics' season in St Andrews, and also at the Belladrum Festival in Inverness and the Albany Theatre in Greenock. In March 2018, the duo returned to Belfast to perform once more at the Belfast Nashville Songwriters' Festival.

"Caledonia USA", a musical based on the songs of Gallagher and Lyle, was staged in Largs in April 2016. Originally titled "When I'm Dead and Gone", it was subsequently retitled after a new song written specially for the show by Gallagher and Lyle. "When I'm Dead and Gone" was featured on the soundtrack of the 1999 British comedy-drama film East is East. British chick-lit author Lisa Jewell's 2010 novel After The Party makes reference to "I Wanna Stay With You". The late British comedian and broadcaster Kenny Everett staged an outrageously literal visual interpretation of "Heart on My Sleeve" on his BBC TV show in the early 1980s. The Variety Club of Great Britain has used "Heart on My Sleeve" to promote its Gold Heart Appeal.