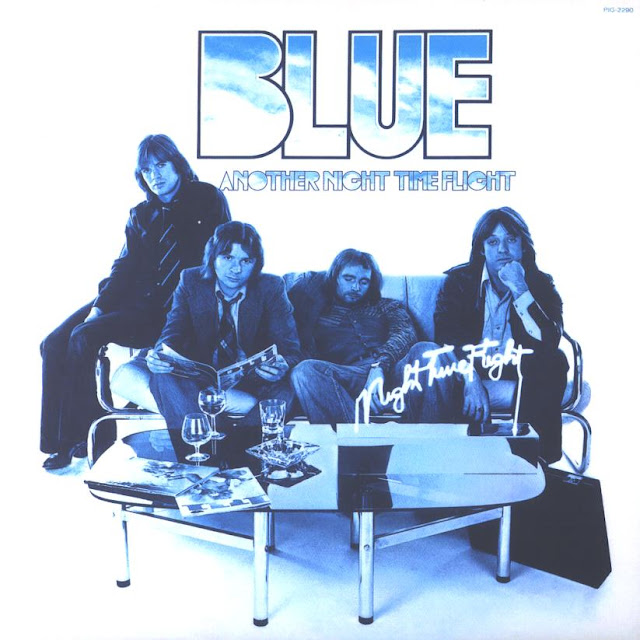 Blue are a Scottish pop rock band, formed in Glasgow in 1973. The band currently consists of Hughie Nicholson, Ian MacMillan and David Nicholson. Formed and fronted by ex-Marmalade guitarist Hughie Nicholson, Blue signed to RSO Records and released their eponymous debut album the same year. Nicholson was a member of Marmalade between 1971 and 1973, writing fifteen songs to fulfil their Decca recording contract, including the hits, "Cousin Norman", "Back On the Road", and "Radancer" before he left to form Blue. He wrote the majority of Blue's material, including their most recognised number, "Gonna Capture Your Heart". Earlier in his life, he had been a member of the 1960s Scottish rock outfit, The Poets.

BLUE began life in 1973 with Hugh Nicholson, formally of 'The Scots of St James' 'The Poets' and Marmalade. Ian MacMillan of 'The Boots' The Sabres' 'White Trash' and 'Cody', plus drummer Timi Donald from 'The Pathfinders', 'Quiver' and 'White Trash'. They signed a recording agreement with Robert Stigwood's record label RSO and their debut album "Blue" received critical acclaim worldwide from the likes of 'Rolling Stone' magazine, Radio 1's 'John Peel' Melody Maker, Billboard and many more. 'Red Light Song', 'I Wish I Could Fly' and 'Look Around' were performed on the BBC's 'Old Grey Whistle Test'. These were followed by the turntable hit 'Little Jody' which featured a new recruit to Blue ex Stone The Crows guitarist Jimmy McCulloch, who later left to join Paul McCartney's 'Wings'. Blue then embarked on a coast to coast US tour with replacement guitarist Robert Smith (Smiggy) playing alongside Muddy Waters, Taj Mahal, The Beach Boys.

The second album for RSO, "Life in the Navy" was recorded and produced in San Francisco by Elliot Mazer, who had just produced the "Harvest" album for Neil Young. Blue toured extensively in the UK and Europe promoting the album. After this period drummer Timi Donald along with Guitarist Smiggy left the group to be replaced temporarily by drummer and percussionist Jeff Allen formally of 'East of Eden' 'The Beatstalkers' and having also performed with 'Van Morrison', 'John Martyn' and 'Mick Taylor'. Dean Ford lead singer with Marmalade helped out with vocals and harmonica on the 'John Peel Sessions'. Hugh's brother David Nicholson having played with 'The Poets' 'Matthew's Southern Comfort' came in on bass guitar and keyboards with Charlie Smith drummer of 'Dream Police' and 'Marsha Hunt's 22' replacing Jeff during the Rocket Records period. Sir Elton John saw Blue performing at a Kiki Dee concert in Bradford, England in 1976 and signed them to his Rocket Records label. The debut album 'Another Night Time Flight' produced by Elton and Clive Franks launched Blue into the USA and UK singles charts with Hugh's composition 'Gonna Capture Your Heart'.Tours in the USA and the UK followed with Blue playing alongside KiKi Dee, Jimmy Buffet, The Small Faces, Leo Sayer and on their performance at the Reading Festival Elton joined them on-stage playing piano.

The second Rocket album "Fools' Party" was promoted in Germany touring the country with top German group Lake. In October 1979 the group relocated to Los Angeles, parting company with Rocket Records. They continued performing at various venues throughout California including a residency at the Central Club (later The Viper Club), The Palomino,The Troubadour and The Roxy where they played alongside The Band whose guests were Dr John and Joe Cocker. Their album 'The LA Sessions' was recorded at The Band's (The Last Waltz) Shangri-la Studios, Zuma beach, California. In 1983 Hugh returned to the UK where he continued writing and recording. Ian MacMillan joined Hugh on various sessions, check out their "Heaven Avenue" album.

Blue's debut single "Little Jody" failed to chart. It was recorded before Jimmy McCulloch joined the band. A revised version of "Little Jody" appeared on a compilation album, 20 in 2002. They then added another guitarist, Robert 'Smiggy' Smith (born 30 March 1946, Kiel, Germany) before recording and issuing their second album, "Life in the Navy". This revised line-up did not last for long, following a dispute with RSO, only MacMillan and Nicholson remained. The duo then added Charlie Smith (drummer) and David Nicholson (bass), and it was this line-up that signed to Elton John's record label named The Rocket Record Company and scored a US Billboard Hot 100 chart entry, and UK Singles Chart Top 40 hit, with "Gonna Capture Your Heart". It was their debut release from the "Another Night Time Flight" album, which was produced by Elton John and Clive Franks. Blue released two other singles from the album which both failed to enter the UK Singles Charts.

They released one other album for Rocket Records, entitled "Fools' Party" (1979) before parting company and re-locating to Los Angeles, California. They spent three years compiling new material and playing the local clubs such as The Roxy, The Troubadour, The Palomino, Madame Wong's and the Central Club (later The Viper). Unsuccessful in securing a contract with their new material, they returned to the UK in 1983, shortly before which Blue released the single "Don't Wanna Make You Cry"/"Moonlight" on the Zuma label (1982). Nicholson released "Love You Made a Fool of Me" (1984), and whilst continuing to record with MacMillan, also wrote and produced four singles with Gary Numan on lead vocals; "Radio Heart", "London Times" and "All Across the Nation" which were released under the name Radio Heart in 1987, and "Like a Refugee (I Won't Cry)" released under the name Da Da Dang in 1994. The first two releases entered the UK Charts.

In 2003, the remaining personnel Hugh and David Nicholson plus Ian MacMillan took the then high flying boy band Blue to court. It was a high profile High Court case over the use of the band's name. But the 1970s band Blue heard the judge opine that "it is not difficult to distinguish between the present day pop group, and the original users of the group's title". They subsequently came to an agreement that they could continue to share the name.