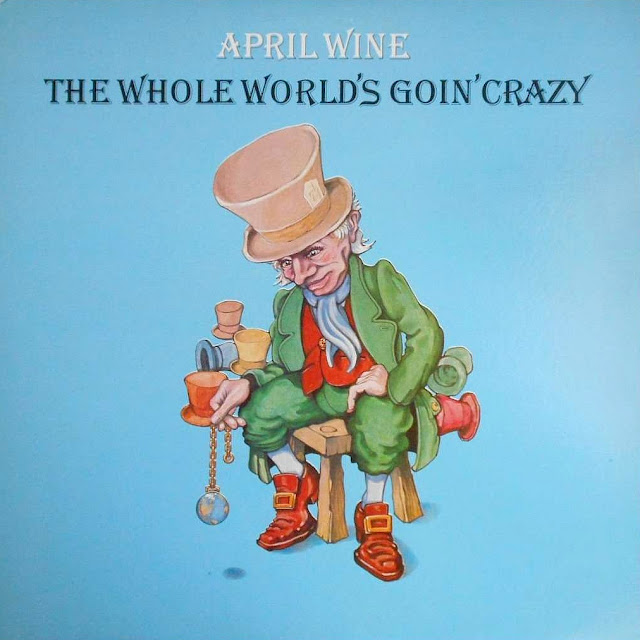 In the Halifax, Nova Scotia suburb of Waverly, Myles Goodwyn was playing in a group called Woody's Termites. In December 1969, his next door neighbor, Jimmy Henman convinced him to join a group composed of himself and his cousins, Ritchie and David Henman. Jimmy and Goodwyn had previously played together in several bands including East Gate Sanctuary while David and Ritchie played in the Lower Sackville group Prism (not to be confused with the famous Vancouver group of the same name). The name April Wine was coined by David for no apparent reason other than the two words sounded good side-by-side. They soon sent a demo tape to Terry Flood in Montreal who, in partnership with Donald K. Donald productions, ran the Laugh-In Club and Aquarius Records. A polite rejection notice was misinterpreted as an invitation to go to Montreal, so on April Fool's Day 1970 they left Halifax for Quebec with all their worldly possessions and very little money in their pockets.

They arrived in Montreal to find there was no deal or gigs waiting for them. But they met Flood and DKD's Donald Tarlton who agreed to house them in a chalet in the Laurentian Mountains north of Montreal. When an opening at the Laugh-In Club came up, the performed to a good reception. After several more area gigs, a management and recording deal was signed in August 1970. They soon began work on their self-titled debut album for Aquarius Records. The record featured the Maritimes radio hit "Fast Train" and was enough to allow them to record a second album. But, in October of 1971 Jim Henman left the band to return to school and was replaced by Montreal native Jim Clench (Coven, Allison Gross).
Ralph Murphy produced the second Aquarius album "On Record" which featured the vehicle needed to propel April Wine into the North American market - a cover of Hot Chocolate's "You Could Have Been a Lady". This single went No. 1 in Canada and made Billboard Magazine's Top 30 in the USA where it remained for 11 weeks. The follow-up was "Bad Side Of The Moon" (an Elton John/Bernie Taupin composition). The toured as openers for Mashmakhan before headlining many smaller Canadian dates.

Goodwyn and Clench soon became allies for a shift in musical direction and internal struggles with the Henmans led to the brothers leaving the act during the recording of "Electric Jewels", to form Montreal-based band Silver and, later, All The Young Dudes with Bob Segarini (The Wackers, Family Tree). Mashmakhan drummer Jerry Mercer was added following a stint with Roy Buchanan and guitarist Gary Moffet (ex-Pops Merrily). The album sparked the 'Electric Adventures Tour' which landed in nearly every major Canadian city that had venues of 2500 seats or more...a major achievement during the day. During the tour Gene Cornish and Dino Danelli (of The Young Rascals) saw April Wine live and decide to produce their "Live (Play Loud)" album. The team-up was so successful that the duo also produced two new studio tracks, and ultimately radio hits, for the "Stand Back" album: "I Wouldn't Want To Lose Your Love" and "Tonight Is A Wonderful Time To Fall In Love" as famed Electric Ladyland Studios in New York. The album went on to sell over 250,000 copies

By this point a rift had formed between Clench and the rest of the band over musical direction and despite Clench's significant vocal and writing contributions to April Wine, he left to join an early incarnation of Loverboy and eventually late-period BTO for several albums and tours.  Steve Lang (The Cheeque, Devotion, Mashmakhan) was his replacement. In March 1976, April Wine's 6th LP "The Whole World's Going Crazy" was released with 100,000 units ordered in advance by retailers. This allowed the band to tour in Canada with Heart. 1977's 'Forever, Now' - which was originally conceived as a Goodwyn side-project - was overly heavy on ballads which diminished their Rock sound but it still managed to sell a modest 100,000 copies.  As a conscious effort to beef up April Wine's sound live, guitarist Brian Greenway (Cheeque, Mashmakhan, The Dudes) was summoned by his old bandmates to quit his forklift job and join April Wine on the road. When the Rolling Stones played their now legendary El Mocambo club show in Toronto in August of 1977, April Wine was added as opening act stemming from a favour the Stones owed April Wine's manager Donald Tarlton. With Eddie Kramer already on hand recording a live LP for the Stones, April Wine's set was also captured for posterity and became the "April Wine Live At The El Mocambo" LP. The band would later open for the Rolling Stones again at Buffalo's Rich Stadium on July 4, 1978.

Another musical re-assessment was in order and after attracting the attention of Capitol Records (Aquarius' distributor), the 1978 album 'First Glance' was released featuring the hard rocking "Roller"; and, soon, American audiences were taking notice. So, 1979 the band finally toured the United States for nearly a year supporting such acts as Styx, Rush, The Tubes and Squeeze. They returned to Canada in October 1979 to start work on the LP "Harder...Faster". When released in early 1980 it produced another handful of radio hits in "I Like To Rock" and "Say Hello" helped in no small part by tours of England and Europe though the British press savaged them. Upon release of the next album, 1981's "Nature of the Beast" and its hit singles "Just Between You And Me" and the Lorenc Hud song "Sign Of The Gypsy Queen", they returned to another disappointing run in England - which was ultimately canceled due to poor ticket sales and mismatched opening slots with British metal acts - but Europe offered them sold-out concerts in countries like Holland and Germany. They were able to parlay this into a headlining tour in the southern United States upon returning to North America.

In January 1982, the band took time off and recorded "Power Play" later that year. After their successive run, the industry began shifting with techno-pop of the '80's and April Wine found themselves a hard rock act with a dwindling audience. Their farewell tour was in 1984 for the "Animal Grace" album and it was successful enough to spawn another in a long line of live albums. Goodwyn put April Wine to bed for a long rest with an eye to working on a solo career from his new home in the Bahamas. However, April Wine still contractually owed Capitol Records one more album. Greenway joined Goodwyn in Nassau, along with Montreal session musicians Barbe, Pellerin and Simon, to record what was supposed to be the band's final album "Walking Through Fire". While living in the Caribbean, Goodwyn released a solo album to middling reviews and zero sales. Soon, a serious discussion to revive April Wine followed. Goodwyn returned to Montreal in preparation for the recording of a second solo album, but interest was steamrolling for an April Wine reunion. Greenway, also licking the wounds of an aborted solo career was the first to sign on. Mercer would leave The Buzz Band to return to full duty, but Moffet is fully committed to his production company (including producing the See Spot Run hit album "Weightless") and his spot is filled by local guitarist Steve Segal. Finally, after years away from April Wine, Jim Clench returned from Calgary to Montreal to fill in the bass slot.

The band would sign a new record deal with FRE Entertainment in 1992 and would release two albums of mostly new compositions - "Attitude" (1993) and "Frigate" (1994). Segal would leave the band in 1995 and April Wine would continue on the road as a four piece over the next five years. In 2001, the band recorded another new studio album called "Back To The Mansion" with Goodwyn, Greenway, Clench and Mercer. Another live hits package recorded live in Kitchener, "April Wine Live 2003", was released and featured Carl Dixon (Coney Hatch) who had been with the band for three tours. June of 2004 saw April Wine travel to Sweden to be part of Sweden Rock 2004 and shared the stage with Heart, UFO, and Foghat among others. Studio album number sixteen came in 2006 called "Roughly Speaking". Clench left the band in January of 2007 to be replaced by Breen LeBoeuf (Chimo!, Offenbach).

Late 2008 also saw the departure of Jerry Mercer from the band. After a cancer scare and about to turn 70 years of age in the Spring of 2009, Mercer decided to retire. He was replaced by Blair Mackay. In March of 2009, April Wine was inducted into the Canadian Music Industry Hall of Fame during Canadian Music Week in Toronto. They also received The Lifetime Achievement Award on the eve of their 40th anniversary as a band; On April 18th of 2010 at the Juno Awards, April Wine were also inducted in to the Canadian Music Hall of Fame. Jim Henman continued writing and has worked on numerous projects in the last 10 years including Terry Kelly, Anne Murray's guitarist George Hebert, and Jeannie Beks & Co. He also wrote "Death: The Musical" which had a long run at Halifax's Neptune Theatre and did a stint in Ottawa in 2001; Jim Clench died on November 3, 2010 in Montreal after a battle with cancer.