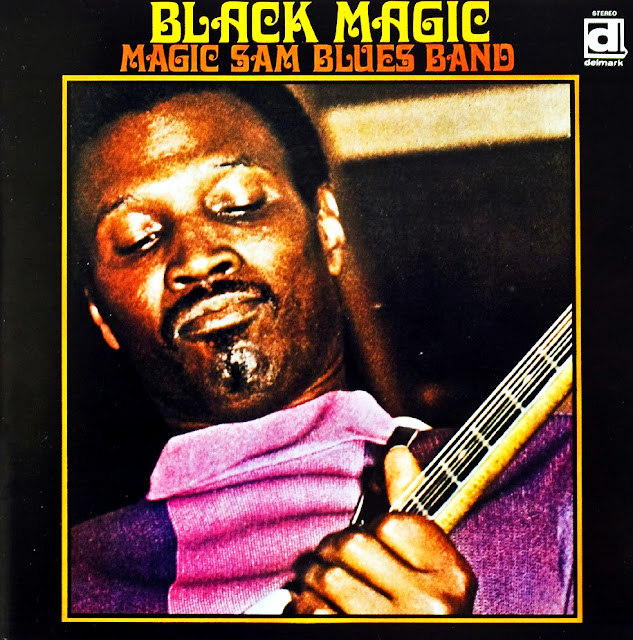 This album's color cover photo is an action shot, showing Magic Sam in the process of choking and bending his strings, a good hike up the fretboard. It isn't clear exactly what he is playing from the picture, although that certainly didn't stop dozens of pimply hippie guitar players from trying to figure it out. In the meantime, the record goes on and the first soloist out of the gate is Eddie Shaw, playing tenor sax. He is blowing over the top of an R&B riff that, although not out of the syntax of Chicago blues, would also have been quite fitting on a Wilson Pickett record.

It is unfortunate that Magic Sam's recording career came to such an abrupt end, as he was one of the best artists working in the musical area between the urban blues tradition and newly developing soul music forms. This fusion was on the minds of many blues artists during the late '60s, and not just because it was aesthetically conceivable. It was also a matter of commerce, as audiences - particularly black audiences - didn't want to hear any blues that sounded too much like something their parents might have listened to. The harmonica player Junior Wells was another one who decided to get a bit of James Brown into his act, not always with great results.

What listeners have here, on the other hand, is frankly delicious, the results of the surplus of talent Magic Sam possessed, a triple threat as a guitarist, singer, and songwriter. Yet with all this talent, the label should also get some credit. This period of the Delmark discography set a high standard for blues recordings, the sound quality and tight interplay among the musicians every bit the equal of the classic jazz recordings on labels such as Blue Note and Prestige. There is nothing fancy about the production, and no gimmicks. It is just a great band, allowed to play the music exactly the way it wanted to. The musicians have obviously worked together a great deal and either had these arrangements down cold from live gigs or had plenty of time to get things tight. This doesn't mean that the music doesn't breathe, as there are plenty of little touches such as drum fills and turnarounds that show the presence of musicians thinking on their feet.

The passage of time also increases the musical value of this music, as the eventual popularity of commercial projects such as the Blues Brothers has only served to dilute the power of urban blues. Labels big and small have forsaken this type of honest and straightforward production, preferring to try concocting a higher level of funkiness through extravagent over-production, boring superstar guest appearances, and insipid studio practices such as prerecorded rhythm tracks and dipstick guitar solos punched in a note at the time. Forget all this jive and check out a track such as "You Belong To Me," where the guitarist cuts loose with a restrained solo that sometimes dances ahead of the beat like a country fiddler while the band pumps away on a superb riff.

The players here, including the fine guitarist Mighty Joe Young, pianist Lafayette Leake, and a muscular rhythm section, are the best of the best. No information is provided on the songwriting, so the assumption is that these tunes are all originals by Magic Sam. None are too obviously adopted from standards, but the opening "I Just Want A Little Bit" was much copied by other blues artists. "I Have the Same Old Blues" has a medium, loping blues tempo that swings so perfectly it should be used as an instruction course for lame blues bar bands.