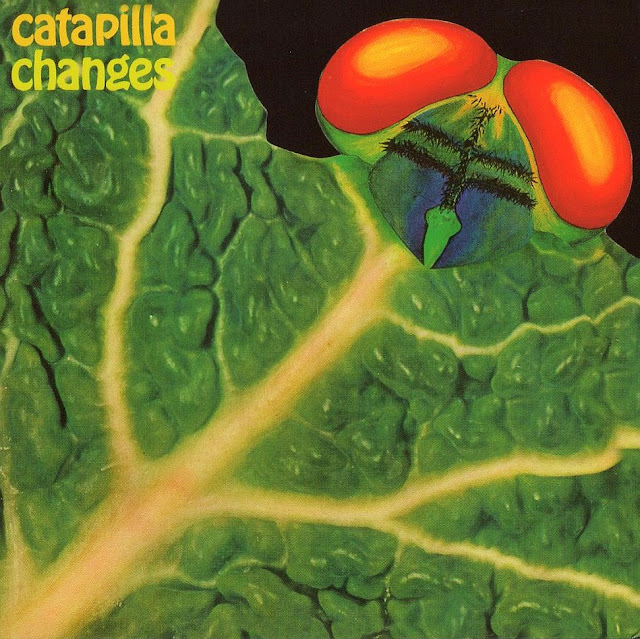 Catapilla was a British group acting short time during the early seventies. The founder of the band was saxophonist and keyboardist Robert Calvert. The band recorded two very interesting albums released by Vertigo. Their debut album contained a mix of heavy rock and jazz. Album characterized, by guitar passages interspersed with lots instruments keyboards, organs and saxophone. The great attraction was the vocalist Anna Meek, has a very distinctive voice and original way to use it. Sometimes fragments of the group resembled the Colosseum, Van Der Graaf Generator, Soft Machine and Nucleus.

The flagship track of the first LP Catapilla (Vertigo 6360 029) 1971' is the 25 minute "Embryonic Fusion" - the quintessence of style group, pure poetry progressive rock. After recording their debut album some musicians left the band. Other members and founders Robert Calvert and Anna Meek, Graham Wilson co-opt new instrumentalists and proceeded to record the second album,Catapilla - "Changes" released in 1972 original UK first pressing Vertigo 6360 074 Production: Colin Caldwell, cover-art by Martin Dean, Recorded at Marquee Studios, London..housed in a spectacular die-cut gatefold cover. Scary cover, too. A giant die-cut catterpillar gnaws its way through the cabbage leaves. Will they come for you too? The lettering is perhaps a bit too tolerantly chosen. Too much trouble to design your own letters? The inside shows the backside of the caterpillar, which is prolongued even into the inside of the cover where the disc has its place. Interesting idea!

This LP is rare and very very hard to find,one of the most mysterious of all the innovative acts signed by progressive Vertigo Swirl label in the early seventies. This short-lived progressive rock band made an unforgettable impression upon the face of music before their exit into obscurity. It's a wonder how a group that was so well ahead of their time and who were literally one of the pioneers of an entire generation of music could be so unrecognized. Now its time to give credit were it is so rightfully due. Plate was also curious, as debut the style group remained the same only slightly enriched it even elements of psychedelia and experimental music. It features the powerful vocals of Anna Meek that have been variously described by critics as ‘elegant’ and even ‘witch-like’. Her voice is complemented on a series of extended performances by the saxophone playing of leader Robert Calvert (who is not to be confused with the singer and poet Robert Calvert of Hawkwind fame). Catapilla’s style veers between avant-garde jazz-fusion and experimental acid rock and there is plenty of room for experimentation on tracks Exorcising and often wordless vocals by Meek still dominate the soundscapes, as do Calvert's ubiquitous saxes, frequently two at the time.

No concessions to sales figures anywhere in sight, the music aims at spiritual cleansing. A lot of echo, a lot of overdubs and long, long tracks govern the style. At times this leads to gaps in the tension, but when it gels it's downright chilling. Best features are the silent passages after wild orgies of sound, that work like sanctuaries after some cosmic ordeal, like the end of Reflections. Also noteworthy: the strange mixture of slow hard-rock and Eastern melodies on Thank Christ for George, moments of savage guitar lines are calmed by vocals that seem to float over the top of a soothing saxophone while the complexity of it all pulls you into another dimension.

They both clock in at over twelve minutes each. Regardless of the length of the songs you are left wanting for more as well as the unexpected tranquillity of the closing track. Unique sounds that make for uneasy but rewarding listening. Vocalist Anna Meek and saxophonist Robert Calvert play off of each other and ride the prog-rock roller coaster of ever changing sound. Prog-rock enthusiasts get a glimpse of where groups like Pink Floyd and Roxy Music could have derived some ideas from. Meek's eerie vocal rants and Calvert's poignant and atmospheric saxophone are everything Graham Wilson (guitar), Ralph Rolinson (keyboards), Carl Wassard (bass), and Brian Hanson (drums) needed to launch a sound that is all at once mysterious as it is aurally exciting.

This LP entailed four ambitious songs of progressive jazz-rock fusion that help to lend a hand in setting the standard for what was to become a new genre. The colorful gatefold sleeve, which has a picture of a caterpillar peeping over a leaf as it enjoys its meal, opens and there is a maggot squirming. This image is a point of reference to the music, its very symbolic. Progressive rock is very much like the process of birth and rebirth. The caterpillar goes into a cocoon and emerges as a beautiful butterfly. They couldn't have chosen a better analogy or illustration to explain the musical process. Its time for us all to investigate the impact that groups like Catapilla has had on the history and development of prog-rock. Despite this, the album went almost unnoticed. In part, it was because the year 1972 was full of many important works of rock