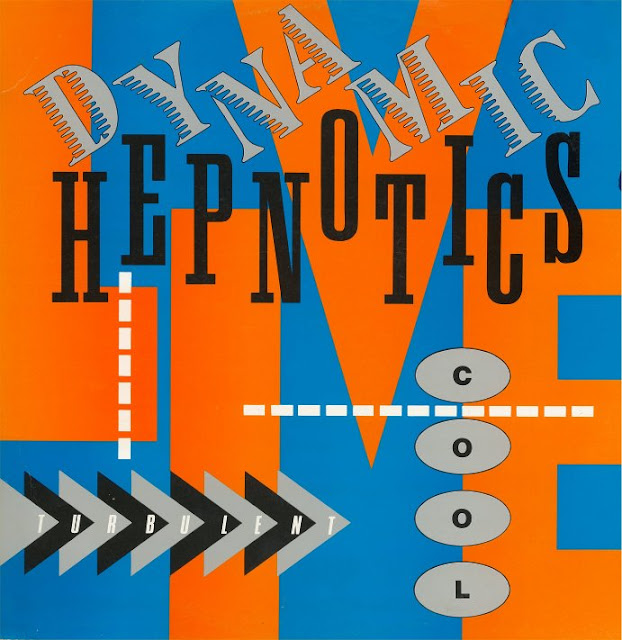 The Dynamic Hepnotics were a successful Australian soul/blues/funk band during the 1980s, with a line up that went through a number of changes during the bands time from 1979 to 1986. No matter where I saw the Dynamic Hepnotics play, they were consistently great to hear live. The Dynamic Hepnotics formed in Sydney in 1979 with Tim Martin on saxophone (ex-Friends), Manuel Patti on bass guitar, Richard Ruhle on drums, Andrew Silver on guitar (Big Town Playboys) and Continental Robert Susz on vocals and harmonica (Rugcutters, Humdinger Dogs). One of their early gigs was at the Potts Point night club, Arthur's. In May 1980 this line-up issued a four-track extended play, Shakin' All Over on the Mambo label. By the time of its release, Silver and Susz had been joined by Bruce Allen on saxophone (ex-Jeff St John Band, Ol' 55), Allen Britton on bass guitar (Mangrove Boogie Kings) and Robert Souter on drums (Lizard, Gulliver's Travels, Living Legends). The group issued a single, "Hepnobeat", in September 1981 and subsequently changed from Mambo to Missing Link Records. Jim Niven from The Sports played organ on the single. An early line-up featured television presenter, Jonathan Coleman, on piano.

In August 1982 they released a six-track EP, Strange Land, which was produced by Ross Wilson (Daddy Cool, Mondo Rock, Jo Jo Zep & The Falcons) for Missing Link. The group contributed to the soundtrack of 1983 feature film, Going Down. By 1984 the band had signed with Mushroom Records' White Label Records. In late January Dynamic Hepnotics appeared at the Narara Music Festival. They released a single, "I'll Make You", in May. Their highest charting hit, "Soul Kind of Feeling", appeared on the Australian Kent Music Report Singles Chart in October 1984 and peaked at No. 5. Early in 1985, they issued Live (aka The Dynamic Hepnotics Live), which including cover versions and originals recorded live in the studio. An audible hissing noise was recorded onto the album from the sound of fire extinguishers used to put out a fire under the stage as the group performed. Mike Gubb joined on keyboards. Live was followed by "Gotta Be Wrong (Way to Love)" in May, which reached the top 20. Their album, Take You Higher, reached the top 20 on the related Albums Chart in June. At the end of that year, Dave Brewer replaced Silver on guitar, Mark Simmonds replaced.

Allen on saxophone and Peter Bishop joined on trumpet. The group's final single, "On Our Way Now", was released in March 1986, which reached the top 100. Souter was replaced by Duncan Archibald on drums, Gubb was replaced by Chris Pascoe on keyboards and Lloyd Swanton replaced Britton on bass guitar. However, the group disbanded before the end of the year. In 1986, "Soul Kind of Feeling" won the APRA Music Award for 'Most Performed Australasian Popular Work'. In November 1998 Susz reformed The Dynamic Hepnotics to perform at the Mushroom 25 Live concert, celebrating the 25th anniversary of Mushroom Records.Frontman "Continental" Robert Susz went on to form the band 'The Mighty Reapers' after the split of The Dynamic Hepnotics in 1988. Susz still performs today in the group 'Continental Blues Party'. Robert Susz and members of The Dynamic Hepnotics came back together in 1998 to perform at the Mushroom 25 Live concert, celebrating the 25th anniversary of Mushroom Records. The band won the APRA award for most played song on radio in 1986 with the song "Soul Kind Of Feeling" which stayed in the Australian Top 10 for 6 months. The band broke up in 1986 after releasing 4 albums. Most of the band members went on to play with other well know Australian bands.

In 1988 Susz formed a "stylish soul / R&B" group, The Mighty Reapers, with Archibald, Brewer and Ruhle. That group recorded three albums, The Mighty Reapers (1993), Trouble People (1994) and The Hurt Is On (1997). Susz was later in the group, Continental Blues Party. Formed in 1999, this sophisticated Sydney R&B outfit led by singer-songwriter-harmonica player Continental Robert Susz of Dynamic Heptonics and Mighty Reapers fame continues in the tradition of those great 80's and 90's bands specialising in soul, blues and burning funk. On the Soul Side transforms a live performance vibe into a studio setting the way Blues Party albums were created by many 50's and 60's era Afro-American Soul and Blues artists. In doing so, it captures a distinctively smooth, genuine black music sound that carves a niche on the local contemporary scene for one highly experienced team drawn from earlier successful Susz combos.

Bruce Allen later toured &/or recorded with The Allniters, Eurogliders, The Eddys, Glenn Shorrock, Doug Parkinson and Ross Wilson, and currently performs with a number of Sydney-based bands including The Layabouts, The Bellhops and The Hollywood Hombres. Mike Gubb has worked with a number of Australian bands, including Mental As Anything, Ganggajang, The Whitlams and Dog Trumpet. Lloyd Swanton formed a jazz trio, The Necks, in 1987 with Chris Abrahams and Tony Buck. Dave Brewer has worked with The Catholics (formed by Swanton in 1991) and currently performs with Perth-based blues band The Doodaddies. In late 2008, Brewer released a solo album titled Life of Riley. Richard Ruhle performs with Sydney-based jazz 4-piece Seriously Cool. Robert Souter performs with Mental As Anything. Duncan Archibald performs with Sydney-based band The Moods.