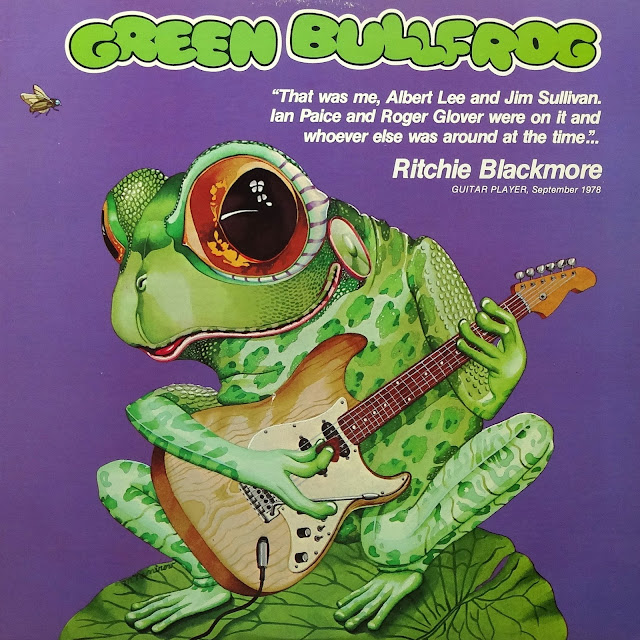 Green Bullfrog - Do the names Speedy, Sleepy, Bevy, Sorry, Boots, Pinta, The Boss, The Vicar and Jordan mean anything to you ? The Green Bullfrog sessions were originally released with many of the artists cloaked behind pseudonyms and consequently it sold 428 copies upon its original March 1971 Decca release. Green Bullfrog was an album resulting from a one-off studio project and recorded between February and May 1970. The album was the idea of producer Derek Lawrence who assembled a group of musicians with whom he had worked in the 1960s. For contractual reasons, the musicians were billed under pseudonyms:Earl Jordan (a.k.a. 'Jordan'), Ritchie Blackmore ('Boots'), Albert Lee ('Pinta'), Big Jim Sullivan ('Boss'), Rod Alexander ('Vicar'), Chas Hodges ('Sleepy'), Tony Ashton ('Bevy'), Matthew Fisher ('Sorry') and Ian Paice ('Speedy'). Obviously the record is a highly sought after rarity. How's about Ian Paice and Ritchie Blackmore (Deep Purple, but you knew that), Tony Ashton (Ashton, Gardner and Dyke), Chas Hodges and Albert Lee (Heads, Hands and Feet), Big Jim Sullivan (Tom Jones), Matt Fisher (Procol Harum), Rod Alexander (JoDo) and Earl Jordan (Les Humphries Singers)? Thought so - well, for some of them, anyway! This was a fantastic "once-off" blues/rock project put together by Derek Lawrence, who produced Deep Purple's first two albums and who was also working with Wishbone Ash at the time.

Legal constraints prohibited the various musicians from using their real names. The album was first released in 1971 in the US on Decca Records and later on in the UK on MCA Records in 1972. If you have a copy of the original MCA album, frame it and look after it - it's very sought after. It was released on CD,including this stunning cover of the Elias McDaniels classic,( rivaled only by Juicy Lucy's and Tucky Buzzard's versions! ) CD reissue, remixed at Abbey Road studios in London during 1991, re-produced by original producer Derek Lawrence. Originally engineered by Martin Birch; remastered by Peter Vince. A Connoisseur Collection 1991 re-release of the Green Bullfrog tapes, re-titled "The Green Bullfrog Sessions", added a further three previously unreleased tracks "Ain't Nobody Home", "Louisiana Man" and "Who Do You Love" were included. Some of the original tracks were also extended and the running order was altered. If you like blues or rock music or are a fan of Blackmore, Deep Purple, Jim Sullivan or Albert Lee you really cannot afford not to hear this album.

The album itself was recorded live on a four track at Kingsway Recorders during two long sessions on April 20th and May 23rd 1970. One session not starting until the early hours of the morning as Blackmore and Paice had been doing a Purple gig earlier. The strings and horns were added on 4th January 1971 with Del Newman. Tracks wise it's a mix of old standards, a Derek Lawrence penned slow blues and the classic million miles an hour (uncredited due to contractual reasons) Blackmore instrumental 'Bullfrog'. Now, to me this is rock'n'roll of great people, listen with due attention, especially track "My Baby Left Me",where there is a duel between guitar-raising Lee & Blackmore, and see if I'm not right! "Green Bullfrog" opens with the rock and roll stomp of "My Baby Left Me" and from the very outset the energy and quality is top notch. Its not just the guitars of Blackmore, Lee and Sullivan that hog the limelight either as although this is certainly a 'guitar' album the ivory tinklers get their moments in the sun, as does the bass of Chas Hodges. Ian Paice of course holds the thing together and drives it all along in the way only he can. Vocalist Earl Jordan is no passenger either as he delivers some energetic raspy blues soaked vocals simply dripping in soul and feeling. Why the bloke isn't thought of more highly is beyond me. "Makin' Time" is a great blues rock stomper with a great riff whilst "Lawdy Miss Clawdy" features some great rock and roll piano to compliment the guitar.

The instrumental "Bullfrog" is for many the highlight of the album as Blackmore, Sullivan and Lee trade solos like gunslingers. This could be the fastest Blackmore has ever played. No lover of the guitar should miss out on hearing it as it is a truly wonderful peice of music. It has been featured on numerous Blackmore anthologies and retrospectives so shouldn't be difficult to track down even if the original album is nigh on impossible to find. Apparently Blackmore just started playing it when Lawrence suggested they needed an instrumental and Sullivan came in underneath and Lee on top in perfect harmony. It is almost like they are racing or duelling at times. With the swirling organ and driving rhythm of the drums you could certainly imagine it as a Purple track. It certainly deserves its place up there as one of the top Blackmore tracks. 'I Want You' is possibly the weakest track on the album but is still no back number.

A little slower than the majority of the album it still features some great riffy guitar with Blackmore sounding very like he did on the "Fireball" sessions. "I'm A Free Man" has an almost soul motown feel to it in places in the vocal and Blackmore plays some great guitar again including a nice 'picked' Shuggie Otis type solo to which singer Jordan can be heard saying "thats mean Ritchie baby" before Blackmore launches into another fast rock solo. Absolutely brilliant stuff. Even with all the fantastic guitar on offer the personal highlight for me is "Walk A Mile In My Shoes". This is for me the definative version and really highlights Earl Jordan's vocal ability. The guitar solos are a little more understated but still straight out of the top drawer. Paice's shuffle drumming is also vital to the overall feel of the song. The backing vocals are, for me anyway, the icing on the cake. Whenever I need cheering up on it goes and it never fails to do the trick. The final track "Loving You Is Good For Me Baby" is a brooding blues from the pen of Derek Lawrence which I could imagine being recorded by Free. According to Lawrence he played the demo to Sullivan who complained "Oh no not another blues, lets make it interesting". He then played it in 17:9 time without anyone batting an eyelid.

A superb end to a truly wonderful album. I can't see why MCA would have sat on it for over a year but can find no definative proof one way or the other. One thing that is for certain though is that is didn't sell many copies. According to MCA it sold less than 500 copies and they have never recouped the $15,000 advance they gave Lawrence for the rights to it. Something which puzzled Lawrence as he claims that everyone he has ever met claims to have a copy.