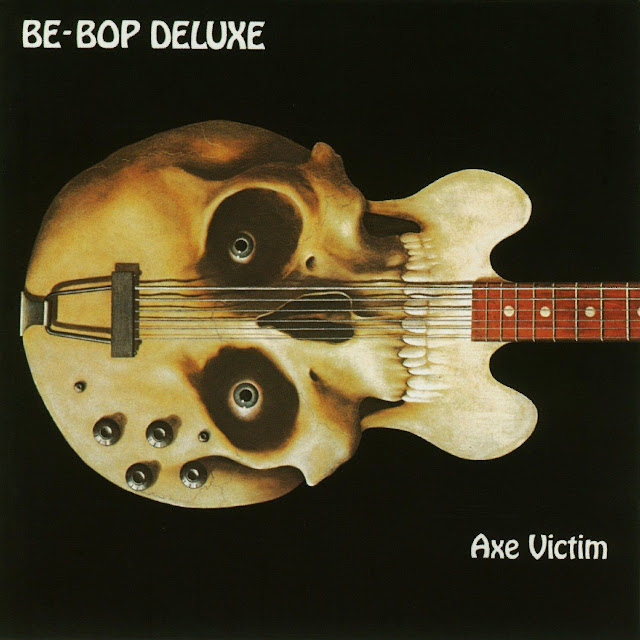 Be-Bop Deluxe's sound emerged as a mixture of glam rock, prog rock and straightforward rock and roll. Science fiction imagery was common in the lyrics, along with the more traditional themes of love and the human condition. Be-Bop Deluxe was founded in Wakefield, West Yorkshire, England, by singer, guitarist and principal songwriter Bill Nelson in 1972. The founding lineup consisted of Nelson, guitarist Ian Parkin, bassist and vocalist Robert Bryan, drummer Nicholas Chatterton-Dew, and keyboardist Richard Brown (who left in December of that year). They started off playing the West Yorkshire pub scene, with one regular venue being the Staging Post in Whinmoor, Leeds. They never played bebop music, but instead came out of the blues-based British rock scene of the late 1960s. At first they were compared to the more successful David Bowie, but Nelson never tried to copy Bowie, and appears to have disliked comparisons or being pigeon-holed. This artistic restlessness eventually led him to disband Be-Bop Deluxe altogether and pursue less commercial paths of expression.

After signing to EMI's Label Harvest Records subsidiary, the initial lineup of the band only lasted for one album, 1974's "Axe Victim", and a short tour. Shortly after this, Nelson dissolved the band and reformed with a new lineup with bassist Paul Jeffreys, keyboardist Milton Reame-James (both formerly of Cockney Rebel) and drummer Simon Fox, the latter introduced by Reame-James to Nelson. However, Jeffreys and Reame-James soon departed the band, and New Zealand-born bassist-vocalist Charlie Tumahai (formerly of Australian bands Mississippi and Healing Force) joined in late 1974. This lineup recorded 1975's "Futurama" album (produced by Roy Thomas Baker, the then producer for Queen) and was then supplemented by keyboardist Andrew Clark for the subsequent tour, after which Clark joined the band. This final lineup remained constant until the band's dissolution in 1978. Jeffreys died in the bombing of Pan Am Flight 103 over Lockerbie, Scotland in 1988.

"Axe Victim" was recorded in AIR London, Audio International Studios and CBS Studios, all located in London, England. The material is different from later releases; it was released at the height of the glam rock era in Britain, with the band's music and image being influenced by the musical zeitgeist. Several songs, such as the title track "Axe Victim", demonstrated this glam influence, whilst others, for example, the future concert staple "Adventures in a Yorkshire Landscape", showed their progressive tendencies. At the time of its release, the band's glam image and music was being criticised as being too similar to that of David Bowie, a comparison that would ultimately lead to Be-Bop Deluxe's disbanding as band leader Bill Nelson strived to make more and more unconventional music. The song "Jets at Dawn", a re-recording of the earlier Smile Records version, holds the distinction of being the longest Be-Bop Deluxe album track, lasting 7:20. The only longer studio recordings are the Sunburst Finish-era B-side "Shine" (at 7:49) and the multi-track "Modern Music" suite. This incarnation of the band, featuring Bill Nelson on vocals and lead guitar, Ian Parkin on rhythm guitar, Robert Bryan on bass, and Nicholas Chatterton-Dew on drums, would only last for this album, before Nelson disbanded Be-Bop Deluxe following the "Axe Victim" tour and reformed it with several other musicians for the following year's "Futurama".

Nelson was acclaimed as one of the finest guitarists in British rock at the time, and the music confirmed that, with his distinctive tones adorning most tracks. Stylistically, the songs took elements from progressive rock, glam rock (the band had flirted with make-up in the early days) and hard guitar rock. "Ships in the Night", taken from the band's third album "Sunburst Finish", was their most successful single in both the UK and the US. The album was notably the first to be produced by EMI employee John Leckie, who had hitherto worked for the company as a recording engineer, in which capacity he had served on "Axe Victim", which he also in effect produced. It was clearly a happy relationship: Leckie would go on to produce all the subsequent Be-Bop Deluxe and Bill Nelson's Red Noise albums for Harvest, including the proposed Red Noise album "Quit Dreaming And Get On The Beam" that Harvest refused to release. Nelson shared producing credits with Leckie from "Drastic Plastic" onward. The first three Be-Bop Deluxe albums are all, in one way or another, named after guitars. "Axe" is slang for a guitar, "Futurama" is a particular make of guitar while "Sunburst Finish" refers to a style of finishing for the instrument.

The title track of the fourth album, "Modern Music", was a ten-minute suite of songs inspired by the experience of the band's touring the US. This was followed by the live album, "Live! In The Air Age", recorded on the subsequent UK tour promoting "Modern Music" although no songs from that studio album appeared on the live one apart from a tantalizing snippet of the audience singing along to "Down On Terminal Street". That recording - now featuring the song in its entirety - and a number of other live "Modern Music" tracks finally surfaced on 2011's 5-CD set "Futurist Manifesto". 1978's "Drastic Plastic", recorded at Juan-Les-Pins in the South of France under the influence of punk, new wave and David Bowie's "Berlin" albums, was a substantial stylistic change from the progressive guitar rock of the early Be-Bop Deluxe. Eager to embrace the changing musical landscape, Nelson dissolved Be-Bop Deluxe.

Immediately thereafter, Nelson formed a new band, Bill Nelson's Red Noise, retaining Andy Clark on keyboards, and adding his brother Ian on saxophone, in which capacity the latter had previously contributed to Ships in the Night. An album followed. Nelson has subsequently released numerous albums and singles under his own name, frequently playing all instruments himself. Nelson planned a four-guitarist, two-drummer band in the nineties with Ian, but it never materialised; in 1992 Nelson released his own demos for this band as "Blue Moons And Laughing Guitars" on Virgin. In 1995, former Be-Bop Deluxe members Ian Parkin and Charlie Tumahai died. In 2004, Sound on Sound magazine, whose website hosts Nelson's online shop and is named after Red Noise's "Sound-on-Sound" album put up the money for Nelson to take his seven-piece band Bill Nelson and the Lost Satellites, originally formed to play the 2002 Nelsonica convention, on tour around the UK as The Be Bop Deluxe And Beyond Tour. The drummer for the tour was Nick Dew who, under the name Nicholas Chatterton-Dew, had played with Be-Bop Deluxe in the early days. The sax player was Ian Nelson, who died two years later in 2006.

Nelson subsequently put together the seven-piece Bill Nelson and the Gentlemen Rocketeers, which included Dave Sturt (bass) and Theo Travis (assorted woodwind, brass), to play songs with vocals from the extensive Be-Bop Deluxe and Bill Nelson back catalogue at his annual Nelsonica event in Yorkshire. In March 2011, the band played live to cameras at Metropolis Studios, London. Initially released on DVD, the resultant video and audio recording has subsequently been reissued on other formats including CD and LP. However, having signed away his rights to these recordings, Nelson has made no money on any of the Metropolis Studios releases.

In 2011, EMI upgraded the Be-Bop Deluxe catalog remastered by Peter Mew featuring all of the band's original albums. EMI and Bill Nelson chose to include all of the band's albums, single edits and B-sides as part of this release with the exception of the pre-Axe Victim, independently released Smile single "Teenage Archangel" / "Jets At Dawn" as part of this set. Although Nelson did not supervise the release he gave final approval on the remasters and agreed to provide a disc of rarities to help sell the set if EMI paid him royalties on the release. The two "Smile" tracks can be found on the compilation "Postcards From the Future - Introducing Be-Bop Deluxe" (2004) and Nelson's 40-year career retrospective, 8-CD set, "The Practice Of Everyday Life" (2011).